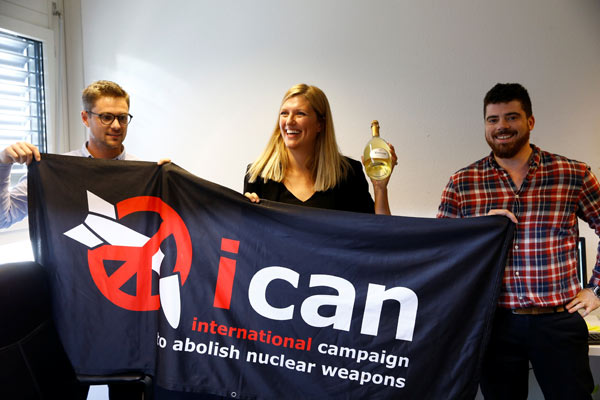 Beatrice Fihn, Executive Director of the International Campaign to Abolish Nuclear Weapons (ICAN) receives a bottle of champagne from her husband Will Fihm Ramsay (R) next to Daniel Hogsta, coordinator, while they celebrate after ICAN won the Nobel Peace Prize 2017, in Geneva, Switzerland October 6, 2017. [Photo/Agencies]

The decision of Norway's Nobel Committee to award this year's peace prize to the International Campaign to Abolish Nuclear Weapons, also known as ICAN, was deliberately timely.

"We live in a world where the risk of nuclear weapons being used is greater than it has been for a long time," a statement from the committee said, citing the danger of more countries, such as the Democratic People's Republic of Korea, acquiring them.

These concerns were echoed by UN Secretary-General Antonio Guterres, who wrote in a congratulatory tweet to ICAN: "Now more than ever we need a world without nuclear weapons."

Nuclear weapons are perhaps the only artifacts created by humanity that only function as long as they are not actually used. The certainty of retaliation in the event of a nuclear attack by one nuclear state against another would risk annihilating both.

This concept of mutually assured destruction－known by the apt acronym MAD－has helped ensure that in the seven decades since World War II, no nuclear state has resorted to using such weapons.

An additional safeguard is that most of the world's nine nuclear-armed states, including China, have pledged that they would not be the first to use them.

It has been argued that the MAD doctrine has worked to avert full-scale wars that might otherwise have broken out at moments of high tension between nuclear-armed states over the decades.

The inherent danger, however, is that the proliferation of nuclear weapons increases the chances of the MAD deterrent failing. There is the risk of nuclear weapons being deployed by irresponsible state leaders, in addition to the nightmare scenario of such weapons falling into the hands of a terrorist group.

Mistakes can happen, even between such rational players as the United States and the former Soviet Union. Former Soviet officer Stanislav Petrov was remembered on his death last month as the man who "saved the world" in 1983 when he calmly determined that a computer alert that missiles had been launched from the United States was down to a technical error.

The DPRK's defiance of UN Security Council demands that it halt its nuclear and missile tests, coupled with the increasingly belligerent tone of the White House, has been the focus of current international concerns.

US President Donald Trump has meanwhile cast doubt on the future of the international agreement under which Iran guarantees not to develop nuclear weapons, considered by its architects to be one of the success stories of nonproliferation.

The UN Security Council has consistently affirmed that the proliferation of weapons of mass destruction and their means of delivery threaten international peace and security.

It has urged all remaining states to add their names to those of the more than 180 that have signed the Comprehensive Nuclear Test Ban Treaty.

In 2009, in a session chaired by then US President Barack Obama, the UN Security Council committed to the goal of a world free of nuclear weapons and established a framework for reducing global nuclear dangers.

Ban Ki-moon, Guterres' predecessor as UN secretary-general, said at the time that "nuclear disarmament is the only sane path to a safer world. Nothing would work better in eliminating the risk of use than eliminating the weapons themselves".

At the same session, Hu Jintao, then China's president, said that removing the threat of nuclear war was vital to realizing a safer world for all, while acknowledging that nuclear disarmament remained a "long and arduous" task.

Given subsequent international tensions, the route to that goal remains just as long and at least as arduous. The Nobel award to ICAN is a timely reaffirmation of a widespread desire to eradicate nuclear weapons. But it raises little hope that the nuclear genie will be put back into the bottle anytime soon.