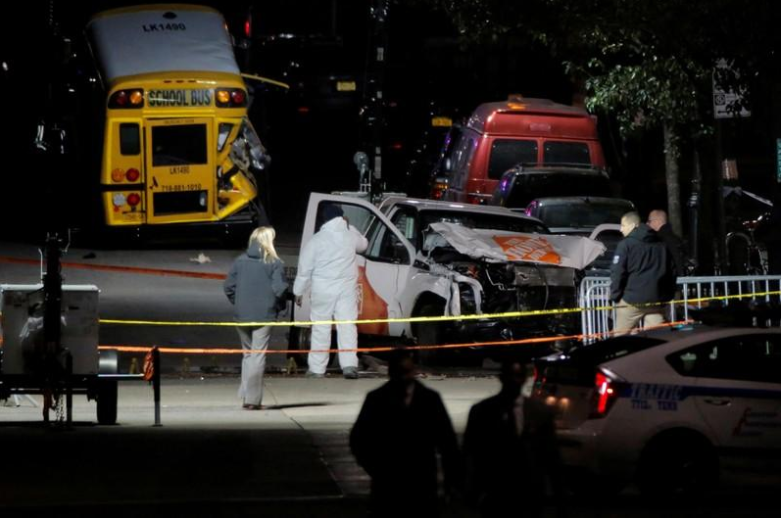 Police investigate the pickup truck used in an attack on the West Side Highway in New York, November 1, 2017. Photo: REUTERS/Andrew Kelly

On Tuesday, a driver rammed a pickup truck through a crowded bike path in New York City, killing eight people and injuring 12 before he was shot by police.

New York police identified the assailant as Sayfullo Saipov, a 29-year-old Uzbek national, who left a handwritten note in the truck that pledged his allegiance to Islamic State. American security officials did not immediately find evidence that directly tied Saipov with Islamic State. So far, U.S. officials consider him as a “lone wolf” attacker who was inspired by the militant group, but not directed by its leaders or operatives.

“The gist of the note was that the Islamic State would endure forever,” John Miller, New York’s deputy police commissioner, said at news conference on Wednesday. “He appears to have followed almost exactly the instructions that ISIS has put out on its social media channels to its followers.”

U.S. officials say Saipov appears to have followed instructions distributed by Islamic State in one of its magazines, Rumiyah (Arabic for “Rome”), which in November 2016 called on sympathizers to carry out truck attacks against Western targets. It also urged followers to leave behind notes declaring support for the group and its leaders.

With the fall of Mosul and Raqqa, the last urban centers under Islamic State’s control in Syria and Iraq, the group has now lost most of the territory it once dominated. It’s tempting to assume that the group has been defeated. But it poses a new threat: as a militant organization that can still exploit social media and recruit sympathizers around the world to kill in its name. Islamic State will now invest more of its resources in a “leaderless jihad” that does not need a physical state.

The severe loss of territory in Iraq and Syria means that routes for foreign jihadists to reach the self-declared caliphate have evaporated. But the group still has the capability to attract recruits, raise funds, secure weapons and inspire sympathizers to carry out attacks around the world.

While Islamic State has organized assaults that required months of training and planning -- such as the November 2015 attacks in central Paris, which killed 130 people -- it has moved steadily toward inspiring loosely coordinated and sometimes haphazard attacks by self-radicalized perpetrators.

The latest wave of attacks fits into appeals by Islamic State’s leaders for their supporters to carry out self-directed assaults that use any means necessary -- including trucks, cars, knives and axes -- to kill civilians, especially in the West.

These lone wolf attacks are the result of an organized, decade-old movement within Islamic jihadism to decentralize attacks and make them more diffuse. This trend predated the emergence of Islamic State, and it can be traced back to al Qaeda after the Sept. 11, 2001 attacks on the United States. Some of al Qaeda’s leaders were worried that the U.S.-led war after Sept. 11 would hamper their ability to carry out centrally planned attacks, so they sought ways for sympathizers to act on their own.

Islamic State expanded that strategy far beyond Al Qaeda’s original conception. In relying on lone wolf attacks by individuals who are self-radicalized and have only a tangential understanding of jihadist ideology, Islamic State is able to project a greater reach than it actually has.

In September 2014, Abu Muhammed al-Adnani, at the time the Islamic State’s top spokesman, issued an audiotaped appeal that explained these new tactics. Adnani, who was killed two years later in a U.S. air strike in Syria, urged the group’s sympathizers to use whatever means at their disposal to attack American and French citizens, and virtually any other Western civilians. “If you are not able to find an IED or a bullet, single out the disbelieving American, Frenchman, or any of their allies,” he said. “Smash his head with a rock, or slaughter him with a knife, or run him over with your car, or throw him down from a high place, or choke him, or poison him.”

Since Adnani’s statement, it became clear that Islamic State would adopt the “leaderless jihad” strategy. For two years, the group has inspired lone attackers to act in its name, especially in the West. These attacks allowed Islamic State’s leaders to create an illusion of strength to make up for their battlefield losses.

In recent months, Islamic State has quickly claimed responsibility for a spate of attacks on civilians in Europe -- especially in Britain and France -- and in the Middle East. In March, a driver mowed down pedestrians on Westminster Bridge in London, killing five people before being shot by security forces as he tried to break into Parliament. In May, a suicide bomber killed 22 in an attack on a concert arena in Manchester.

In June, three assailants sped across London Bridge in a van, killing eight by ramming into pedestrians and stabbing people with hunting knives. And in August, suicide attackers stormed a Shi’ite mosque in Kabul, Afghanistan’s capital, killing at least 30 worshipers and wounding dozens.

The threat extends beyond the West and the Middle East. Islamic State fighters from Southeast Asia -- including some who recently battled Philippine security forces in the city of Marawi during a five-month siege -- are starting to return home, especially to Malaysia and Indonesia. These militants would pose a threat because of their battlefield experience, guerrilla warfare training and networks they established while fighting in Iraq and Syria.

To combat this more complex range of threats posed by Islamic State and its sympathizers, governments throughout the world will need to do more than simply continue military strikes against targets in Iraq and Syria. It will also mean greater vigilance in monitoring clandestine networks set up by Islamic State operatives -- and adjusting to a new enemy that is constantly adapting its methods.