In a dark, windy night, a gang of extremely vicious terrorists launched a sudden assault on a village. The household which was attacked first was quickly filled with gunfire and flames, and burst into flames.

As the family struggled to survive, another family in the village not only stood by and let the situation get worse, but made sarcastic remarks on the misfortune, saying that “this family must had irritated the terrorists, and thus incurred the revenge now.” 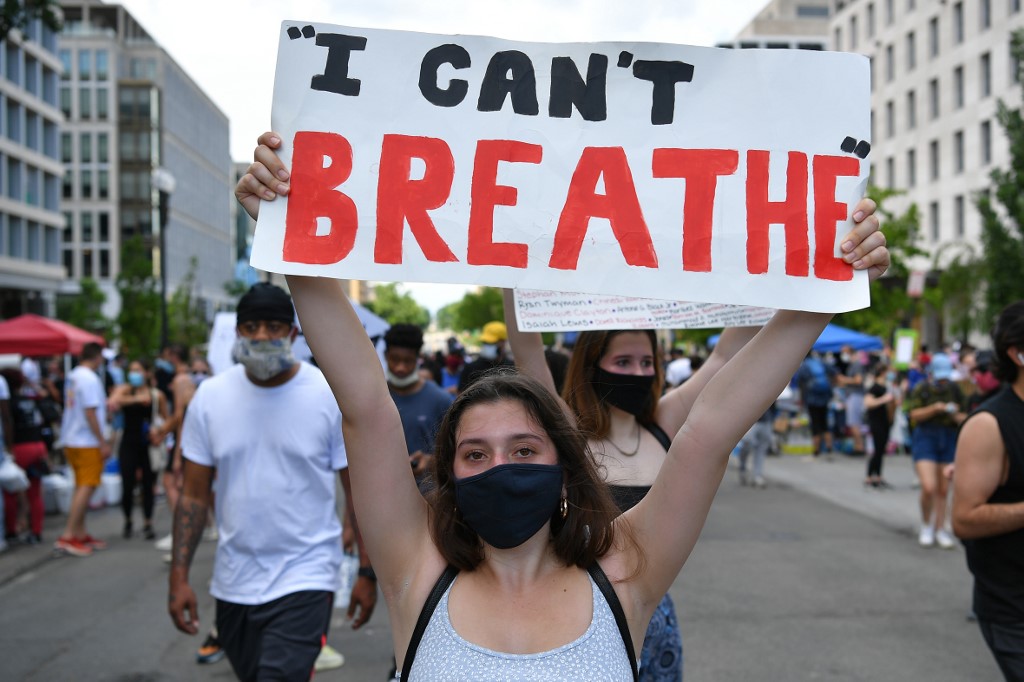 A protester holds up a placard near the White House in Washington, DC, on June 5 2020, amid ongoing demonstrations over the death of George Floyd in police custody. (Photo: AFP)

To its surprise, the family that was brutally assaulted fought back against the attackers desperately and wouldn’t flinch in the face of life-threatening danger.

After battling with the family for a long time, the terrorists got frustrated and realized that they had unwisely started the war by attacking a tough family that won’t yield. Then the Mob decided to shift their focus somewhere else.

Surprisingly, the family that mocked the victims became the new target of the terrorist attack and was caught unprepared.

Serious lack of precautions or prompt response to the attack made the second family completely overwhelmed as the attackers drove straight in its house and wantonly slaughtered its family members, causing massive casualties and tremendous damage to its home.

Shocking as it sounds, at the critical moment when the terrorists were still killing more of its family members, the second family didn’t reflect on its own failure in anticipating the situation and coping with the catastrophe, but started to complain that the first family hadn’t captured and killed the terrorists, and even demanded that the first family compensates it for its losses…

Does this story sound just like what happened on the earth since the COVID-19 outbreak?

Today, the US is still faced with severe epidemic situation. Both its number of confirmed cases and death toll of the disease are the highest in the world. No matter the politicians of the country say, facts are facts.

In an effort to shift the blame for their own faults and incompetence onto China to distract attention of US people, certain US politicians first falsely accused China of covering up information about the outbreak, and then cooked up the rumor that the novel coronavirus was leaked from a Chinese lab.

These groundless allegations against China have all been disproven time and again and refuted by scientists and medical experts from various countries repeatedly.

Recently, US politicians adopted new wording to scapegoat China for the spread of the COVID-19 around the globe, saying that “The world is now suffering as a result of the malfeasance of the Chinese government.”

What kind of logic is that? Just like the story above, the ridiculous attempt of certain US politicians to pass the buck to China for its own faults is unreasonable and highly illogical.

Every country wants to wipe out major infectious disease as soon as it emerges, but no country can guarantee the result, which is normal and logical, let alone a brand new virus as the novel coronavirus.

Mankind knew nothing about such key aspects of the virus as its transmission and pathogenic mechanisms when it first broke out, which made it extremely difficult to be prevented and controlled.

China was the first to report the disease. But there has been no final conclusion on when and where the human-to-human transmission of the virus started.

When confronted with the infectious disease that has spread the fastest, caused the most extensive infections and been the hardest to contain since the founding of the People’s Republic of China, China made the containment of the epidemic the top priority.

With Chinese President Xi Jinping personally taking charge and planning the response to the outbreak, the country has made nationwide efforts to stop the virus from spreading to other parts of the world.

Putting people’s health and safety before everything else while taking the worst-hit Hubei province and its capital Wuhan the country’s main battlefield against the epidemic, China made clear requirements of preventing the coronavirus from spreading within the region or beyond.

The country has taken a series of decisive measures to prevent and control the spread of the disease and treat patients, preliminarily curbed the rapid spread of the disease in over one month, brought its daily number of new confirmed cases at home under ten in about two months, and made significant achievements in the fight against the virus in Hubei province and its capital Wuhan while bringing the epidemic under control across the country in around three months.

As a country with 1.4 billion people, it’s hardly easy for China to bring the outbreak under control in such a short time.

Just like many foreign media and international figures commented, China has made unquestionable achievements in fighting the COVID-19.

China’s efforts to fight the epidemic helped stem further spread of the disease, effectively cut off the transmission chain of the virus, contributing significantly to the global fight against the epidemic.

In fact, since the outbreak of the epidemic, US politicians have praised China for its epidemic prevention and control measures on many occasions, saying things including “I think China is very, you know, professionally run in the sense that they have everything under control,” “China has been working very hard to contain the Coronavirus. The United States greatly appreciates their efforts and transparency,” and “Great discipline is taking place in China, as President Xi strongly leads what will be a very successful operation.”

On Jan. 23, China closed all outbound channels at airports and railway stations of Wuhan, since when until April 8, there had been no commercial flights departing from or arriving in the city, and no trains left the city.

On Jan. 31, the US government was the first among all foreign countries to announce suspension of direct flights between China and the US operated by three major US airlines. On Feb. 2, the country closed its borders to all Chinese citizens and foreigners who had been to China within the previous 14 days.

It seemed that the US thought it can rest easy as long as China was there to prevent and control the spread of the virus and it cut off air links with China, which has been proven to be wishful thinking.

As facts have shown, the US squandered the nearly two-month time window won by China.

US delay in taking social-distancing measures caused about tens of thousands of people to lose their lives to the epidemic, according to a research team from Columbia University.

Had the US begun imposing social-distancing measures one week earlier in March, 36,000 fewer people would have died in the COVID-19 pandemic, and about 83 percent of the country’s deaths would have been avoided, estimated the research team.

Some US people don’t understand why the disease first broke out in China, but spread all over the world rather than various parts of China.

It’s actually quite easy to explain the reasons to those who really don’t understand, as the whole thing is not that complicated. However, it’s afraid that some people have already known the answer and just asked the question to mislead the public.

China’s nationwide efforts to fight the epidemic actually refer to travel restrictions across the country, efforts to put a megacity and a whole province with more than 60 million people under lockdown, tremendous mobilization and deployment of personnel and materials to help Hubei with its epidemic fight, free treatment for all COVID-19 patients, regardless of the cost, earnest implementation of joint prevention and control mechanism in every community and village, and concerted efforts of 1.4 billion people who have voluntarily worn face masks, washed their hands frequently, and avoided gatherings of people.

Inconceivable as they sound for some American people, these are what have actually happened in China, and also the reasons why the disease didn’t spread in large scale to other provinces of the country and was impossible to spread beyond its borders.

Statistics from several major Canadian provinces have shown that the novel coronavirus spread in Canada was brought to the country by US visitors, according to foreign media.

Australia explained clearly in March that 80 percent of its COVID-19 cases have been either imported from overseas or close contacts of these people, with most of the cases being brought in from the US

The French research institute Institut Pasteur found that the virus strain circulating locally in France is of unknown origin.

None of the imported COVID-19 cases in Russia was from China.

Singapore’s COVID-19 cases imported from China were less than one tenth of those from other countries.

According to the Japanese National Institute of Infectious Diseases, the novel coronavirus strain confirmed in Japan since early March was not from China.

It’s indisputable that by making all-out efforts to fight the COVID-19, China has not only protected the health and safety of its people, but also contributed to global public health security.

The COVID-19 outbreak has brought about a competition between the virus and sense of responsibility and courage of countries, and also a major test of morality and conscience.

China, while adhering to the principle of putting people’s lives above everything, submitted an “answer sheet” that has been marveled at by people around the world.