Observer: Why Indo-Pacific region should eye a cooperative, inclusive initiative Senior officials from the US, Japan, Australia and India met in Singapore on June 7 to consolidate their views on the Indo-Pacific region after their first consultation in Manila, Philippines last November.

The brief official news release, only four paragraphs long, resonated with some points US Defense Secretary James Mattis made in the 17th Shangri-La Dialogue early this month.

However, when speaking to the defense and military representatives, including Mattis, gathered in Singapore, Indian Prime Minister Narendra Modi’s keynote speech presented an alternative to keeping the Indo-Pacific region as a club of limited members. Modi concluded that the region, spanning from Africa to the Americas, will be inclusive and that he looks forward to further cooperation. 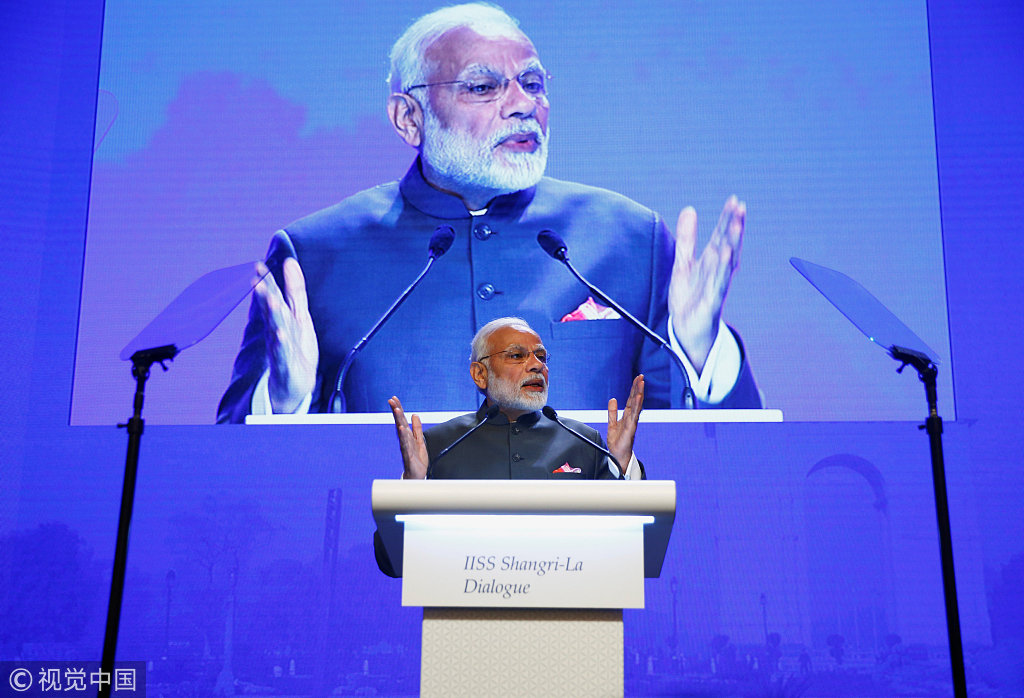 With more than 1.3 billion people and economic growth higher than 7 percent, India’s role on the regional stage is self-evident.

As the founder of the Non-Aligned Movement, India seeks an independent foreign policy. Even with the rebooted informal quadrilateral security dialogues between the US, Japan, Australia and India, the last member state would not like to form a military bloc against any other country. This was evident when India recently dumped Australia from the Malabar naval exercises, as the more influential India would not follow a confrontational international power pattern.

Meanwhile, both China and India, as emerging powers and significant neighbors, look toward a harmonious approach of co-existence and co-prosperity. That is why Modi stressed that “a two-day informal summit with President Xi helped us cement our understanding that strong and stable relations between our two nations are an important factor for global peace and progress” during his speech in Singapore.

During the annual regional strategic and security dialogue, two voices became much clearer: One supports cooperation and denies containment or an exclusive military bloc; the other searches for coercion or threats. Sothirak Pou, exclusive director of the Cambodian Institute for Cooperation and Peace, questioned whether Mattis’ initiative would make the region more peaceful or more troubled. Although Mattis said it is “open and inclusive”, it partly still has some reservations about China. If China is part of the mechanism, then we can have a peaceful world.

Contemporary history in Asia tells us only cooperation and inclusion would benefit the region and its people due to diverse cultures, religions and social systems, and the strong wish for peace and development after suffering long-term instability. The Association of Southeast Asian Nations (ASEAN), the sub-regional cooperation mechanism, believes any exclusive bloc is unacceptable in this region.

In an interview in May, Singapore foreign minister Vivian Balakrishnan, which is the current ASEAN chair, insisted that the “free and open Indo-Pacific” still has to flesh out a sufficient answer to the questions that should include benefits the Southeast Asian economy may enjoy and how it would help local companies access a bigger market. “We never sign on to anything unless we know exactly what it means,” Balakrishnan said.

As the geographical gateway between the Indian Ocean and Pacific Ocean, ASEAN’s attitude should be respected, and any regional initiative should include ASEAN countries.

Kavi Chongkittavorn, a senior fellow at the Thai Institute of Security and International Studies, noted that ASEAN countries share these common positions on the Indo-Pacific concept that ASEAN Centrality is the key, must be open and inclusive, and must not target any third party.

For ASEAN countries, a good relationship between China and the US could facilitate trade and investment as well as keep the regional peace and stability, which serves as a positive external environment to continue their development, Chongkittavorn added.

The total population of India and ASEAN member states is around 2 billion and cooperation and inclusive development have benefited them for more than 2,000 years. The commercial ships along the maritime silk road connecting the Pacific and Indian Oceans embodies the importance of mutual trust, mutual benefit, and a win-win solution in the region, and is the reason why the region welcomes and accepts cooperation and inclusive initiatives.