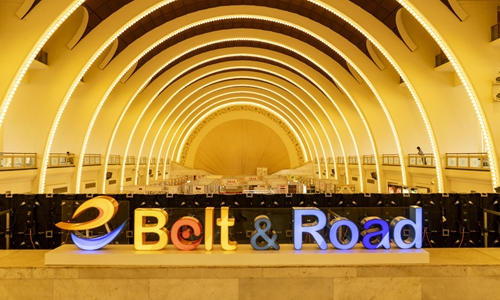 Media outlets and scholars of the US and Europe always see the China-proposed Belt and Road Initiative (BRI) from a perspective of China's foreign strategy. Many of them believe that BRI is part of China's global strategy that will boost Beijing's relations with relevant countries. Such a view tends to overlook the positive and far-reaching impact that the BRI has brought to countries along the route.

What matters is not whether the BRI is part of China's strategy, but that it can stimulate and promote the development of countries along the route. Development is the first priority. In the current globalization process, development requires cooperation as well as infrastructure construction.

A typical Western view of the countries engaging in the BRI is that these states are attracted to China's money. The deeper cause is that the West is uncomfortable with the closer ties between China and countries along the BRI. The West has also attributed some countries' policies that do not meet Western standards to China's support.

Deep in the Western countries' hearts, they are reluctant to witness closer relations with China, as if those states would naturally alienate the Western world. In essence, they are still observing the world with their traditional Western geopolitical conception, which has profoundly influenced the Western understanding of the BRI.

Why are countries along the BRI willing to approach China? This is the crux of the matter. China's ties with these countries are not without strains. For instance, the settlement of the Myitsone Dam project in Myanmar, which was called off nine years ago, has not yet had a result acceptable to both parties. But in general, the BRI has promoted relations between countries along the route and China. Chinese companies have played an extremely important role in Myanmar's national power coverage plan for 2030.

One of the most important reasons is that these countries' development needs China's support, and China is also happy to share development dividends with them. Chinese companies also hope to seek new markets by going global. This is fundamentally different from the Western colonists in previous eras. China's cooperation with the countries along the BRI is based on the principle of reciprocity and is market-oriented.

If we analyze this issue from a development perspective, it will be easier for us to understand the significance of China's support for infrastructure development in countries along the BRI. The development of any country across the world, including Western countries, requires infrastructure, such as roads, power stations, and reservoirs. Without such foundations, development cannot be realized.

Obviously, the BRI is a win-win global development strategy rather than a zero-sum game. If Western countries can provide such wonderful opportunities to the countries participating in the BRI, they would also like to cooperate with the West. As a matter of fact, many countries along the BRI, especially those who are near China, have quickly developed in recent years, which draws a lot of attention from the companies in Japan, South Korea, Singapore, and some Western countries.

In 2019, Western countries' fear of a rising China seemed to be increasing, and the US seems to be most concerned about it. One of the reasonable explanations for their fear is that when facing the changes brought about by China, they tend to shackle themselves in the outdated geopolitical mind-set, regarding China as an opponent or an enemy of the West.

Therefore, all these stereotypes will only lead to a bias that as long as a country gets any closer to China, it will definitely be alienated from the West. Unless they break out of the old framework and try to understand the BRI from the standpoint of developing countries, Western countries will feel more troubled.