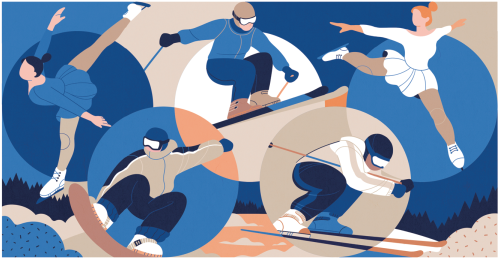 The Beijing 2022 Winter Olympic Games is three weeks away, and all preparations are in place to make the event a memorable experience for athletes and spectators alike despite strict COVID-19 prevention and control measures being in place.

The Beijing Winter Games will be the second Olympics to be held amid the pandemic, following the Tokyo 2020 Summer Olympic Games, which was held in July-August 2021.

When the Tokyo Summer Games were deferred for a year due to the COVID-19 pandemic, International Olympic Committee President Thomas Bach said the "Olympic flame can really become the light at the end of this dark tunnel". That he has been reiterating this statement underlines the determination of the IOC and the organizers to hold both the Summer and Winter Games. Bach has also said sports and the Olympic spirit can inject more vigor into society notwithstanding the impacts of the pandemic.

Besides, the IOC's "StayStrong campaign" has put athletes at the heart of the international drive to inspire people to "Stay Strong, Stay Active, Stay Healthy and Stray Safe".

Unprecedented global efforts, along with the resilience and determination of the participating athletes and officials, the Tokyo Games organizers and the Japanese people made the 2020 Summer Olympics a safe and successful event.

Following the Tokyo Games, the Beijing Organising Committee for the 2022 Olympic and Paralympic Winter Games has made enormous efforts to hold a simple, safe and yet spectacular Olympics.

To achieve that goal, it has taken multiple measures including streaming programs, making full use of the 2008 Summer Games' venues for the Winter Games, and downsizing the operation teams at the venues to reduce costs and infection risks. And despite the difficulties and uncertainties, the Beijing organizing committee is pushing ahead with trials for different events to ensure the Games are safe and successful.

After winning the bid in 2013 to host the 2022 Winter Olympics, the organizing committee decided to hold a "high-tech Winter Games", and collaborated with science and technology departments and institutions to prepare a detailed action plan for the Games. For example, more than 130 types of technologies have been tested at trial events, athlete training sessions and simulated situations. Also, hydrogen-powered vehicles will be used to reduce emissions, and 5G and the internet of things to bolster prevention and control measures to ensure the safety of athletes and spectators.

But some countries, especially the United States, are trying to spoil the atmosphere by announcing a "diplomatic boycott" of the Winter Olympics based on fabricated claims of human rights abuse in the Xinjiang Uygur autonomous region. Due to their ideological bias, some Western governments and politicians have been using all sorts of excuses to disrupt the Beijing Winter Games. But they will fail in their designs to disrupt the Games this time too, just as they had during the 2008 Summer Games.

Moreover, although the Joe Biden administration has said it will not send any government officials to the Winter Games, the fact is, the Chinese government has not invited US officials to attend the Games. How can you boycott an event to which you have not been invited?

These Western politicians are out to stigmatize China using one false claim after another. More important, by announcing a "diplomatic boycott", the US has violated the principle of political neutrality enshrined in the Olympic Charter, and acted against the Olympic motto of "together".

Excellence, respect and friendship are three principal Olympic values integral to the Olympic spirit. The Olympics seeks to create a way of life based on values, social responsibility, and respect for universal principles.

The Beijing Winter Games motto, "together for a shared future", is aligned with the Olympic motto of "faster, higher, stronger" and encompasses the core values and vision of the Olympic Movement. It also conveys the warm wishes of 1.4 billion Chinese people and their support for a better future.

In short, the Beijing Winter Olympics is a sign of hope amid the pandemic and represents the triumph of human spirit over all odds.