OPINIONS On the road to quality urbanization

On the road to quality urbanization 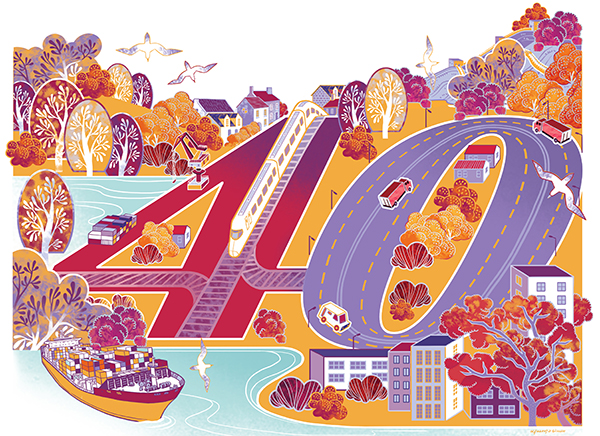 Editor's note: Following are excerpts from the speeches delivered by four senior scholars at China Urban Forum 100 in early June, which focused on "Four decades of Chinese cities' reform and opening-up":

During the four decades of reform and opening-up, China has experienced the largest and fastest industrialization and urbanization in the world. Many new cities have come up. And along with the major city clusters in Beijing-Tianjin-Hebei, and the Yangtze River Delta and Pearl River Delta regions, they have become growth poles of China's economic development and helped China to play a more active role in global economic cooperation and competition.

But rapid urbanization would not have been possible without the help of a large workforce, mostly from rural areas. This "transfer employment" increased the efficiency of urban and rural production factor distribution, and promoted the continuous and fast development of the national economy, leading to drastic changes in the social structure. Thus urbanization has become an important engine of China's modernization.

China's economic development has had a huge impact on the world, too. As China, whose population accounts for one-fifth of global total, transforms into an urban society, its level and quality of human development have remarkably improved. A country with more than 1.3 billion people has achieved a level of urbanization and industrialization in four decades that the Western countries took two centuries to realize.

China's urban development path with Chinese characteristics is based on Chinese thought, Chinese wisdom and the Chinese concept of progress. Experience shows that only by deepening reform and opening-up can China make greater achievements and cope with the challenges of urban development.

In the future, China's urban development should be based on Xi Jinping Thought on Socialism with Chinese Characteristics for a New Era because of the change in Chinese society's major contradiction, the increasing importance of innovation and coordination, eco-friendly policies, openness and development ideas, as well as the overriding significance of people-centered development.

We should improve our urban development pattern and urban management system capacity to meet the new challenges. By addressing the principal contradiction of "unbalanced and inadequate development and the people's ever-growing needs for a better life" and solving the problems arising out of the urban development process, improving the environment, and sharpening economic competitiveness, China can establish an urban development path with Chinese characteristics.

Xu Kuangdi, honorary president of the Chinese Academy of Engineering

Rural revitalization can hardly be accomplished at one stroke. To achieve that, at least a three-step process is required. By 2020 rural revitalization is expected to make vital progress with the establishment of a basic urban institutional framework and political system. By 2035 rural revitalization is likely to make decisive progress, when modernization of agriculture and the countryside is expected to be basically achieved. And by 2050 rural areas are likely to be totally revitalized, and the goals to strengthen agriculture, beautify the countryside and enrich the farmers achieved.

The three steps of rural revitalization are in accordance with the realization of the two centenary goals of Chinese Dream.
But rural revitalization has many models. First is the rural community member network model based on Internet Plus, which is basically aimed at alleviating poverty. The network promotes the development of a new type of agricultural business entities including farming households, farms and rural cooperatives, which can effectively lead the large number of farmers to emerge out of poverty, by substantially increasing their incomes.

Second is the development model that promotes the integrated development of rural primary, secondary and tertiary industries based on the actual local situations. For instance, Chishui in Guizhou province is home to the famous Danxia landform, a UNESCO World Natural Heritage site. The landform is beautiful, but it is very difficult to plant trees or till the land there. So people in Chishui grow Dendrobium nobile Lindl, which is a valuable Chinese herbal medicine. In fact, the herb grown on more than 80,000 mu (5,333.33 hectares) in Chishui every year is worth over 1 billion yuan ($156.48 million).
Third is the innovative business model that combines the rural community member network with targeted poverty alleviation projects and e-commerce. Based on e-commerce platforms for advanced agricultural products and agricultural big data, farmers can now easily sell their produce, which used to be difficult for them in the past. Through this channel, the authorities can help the farmers to build agricultural brands online as well as offline.

The fourth model focuses on achieving drastic industrial change based on urban technological resources. For instance, Luoshe town in Deqing county of Zhejiang province that has a population of less than 20,000 used to be famous for its woodworks and known as "the hometown of carpenters". Thanks to its accelerated industrial transformation, Luoshe has now become "the hometown of piano".

The fifth model focuses achieving on building a sound industrial chain for agricultural products. In addition, famous rural historical and cultural towns and villages should be protected during the process of rural revitalization and urban and rural integrated development, because it is vital to preserve our historical and cultural sites.

Cai Fang, vice-president of the Chinese Academy of Social Sciences

Urbanization with Chinese characteristics has three key words: exit, mobility and entrance. These three words determine the process of resource redistribution centered on the workforce, the process of urbanization as well as the source of reform and opening-up.

Second is the mobility of the labor force. Following Deng Xiaoping's speech on his southern inspection tour in 1992, labor-intensive industries in the coastal regions created a huge number of jobs not only in the major cities, but also in some coastal towns, which helped release the large-scale transfer of the surplus labor force in agriculture. During this period, the number of migrant workers increased rapidly. And due to the expansion of employment opportunities and increase in the labor participation rate, the incomes of farmers increased remarkably.

Third is the entrance of the migrant population. Reform aimed at eliminating institutional obstacles that impede the migration of laborers is a crucial step in the urbanization process. In the past years, several progressive reforms have been implemented. Although the hukou (permanent household registration) system still exists, many systems such as those for food distribution have been abolished. People can compete for jobs fairly, and rural residents can work and live in the cities without limitations. Besides, the hukou system is being gradually reformed.

These are some of our experiences of reform and opening-up.

In the four decades of reform and opening-up, China's urbanization rate has increased 40 percent, from 17.9 percent to 58.5 percent. During this period 640 million people migrated from rural to urban areas－equal to 46 percent of China's population.

Over the past four decades, Chinese cities have also played an increasingly important role in the national economy. In 1978, the urban GDP accounted for only 36 percent of China's overall GDP. Today, urban areas account for about 80 percent of China's GDP.