OPINIONS One Day One Job: a day in the life of a Shanghai firefighter

One Day One Job: a day in the life of a Shanghai firefighter

I’d always wanted to experience what it’s like to be a firefighter: the thrill of racing around the city in a huge fire truck with sirens blazing, the satisfaction of putting out a huge fire and saving people’s lives. When I spent a day with the guys at Shanghai’s Hongkou Fire Station recently, I learned there’s a lot more to it than that.

First things first, firefighters in Shanghai — as opposed to the volunteers in my country — live at their station full-time. They have a regimented schedule and every moment is accounted for. 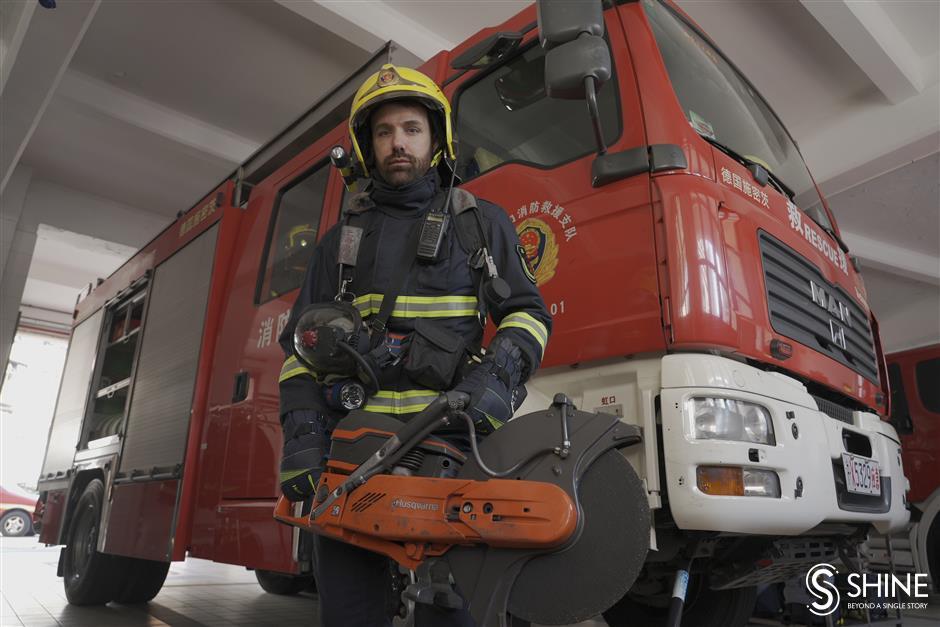 Andy spent a day experiencing what it’s like to be a firefighter.

Okay, perhaps “call” isn’t the right word here. It’s more of an alarm, but not the kind you’re used to. At 6:30am on the dot, an alarm is blasted through the entire station, ensuring even the heaviest sleeper is jolted back into the land of the awake.

At that point the guys need to march straight downstairs to the courtyard for their morning inspection. The looks on their faces say it all: I’m not the only one who isn’t a morning person!

The on-site cooks have a hot, steamy breakfast ready for the guys right at 7am. My body hadn’t yet woken up, so breakfast was a no-no for me, but the steamy soy milk looked great. Coffee was what I needed, and that was nowhere to be seen.

Hongkou Fire Station’s squad leader Wang Dajing, a 26-year-old from Anhui Province, took me under his wing for the day. We headed over to the courtyard for a warm-up, before a bit of strength training on the jungle gym.

Now, I knew I wasn’t necessarily strong before my gig at the fire station, but I didn’t know I was actually, to put it lightly, a bit of a flake. I couldn’t even lift my chin above the bar, let alone flip my body 360 degrees over it.

Wang told me that the flip is quite a feeling, and he insisted I experience it any way possible. He decided to get eight guys from the squad to literally lift me over it. Yes, it was as awkward as it sounds, and it looked even worse. (Check out my video by scanning the QR code below if you want some secondhand embarrassment!)

We also did some interesting drills using some gear, including hose exercises, rope climbing and ladder climbing. I did okay on the hose exercise, but failed at all the rest. 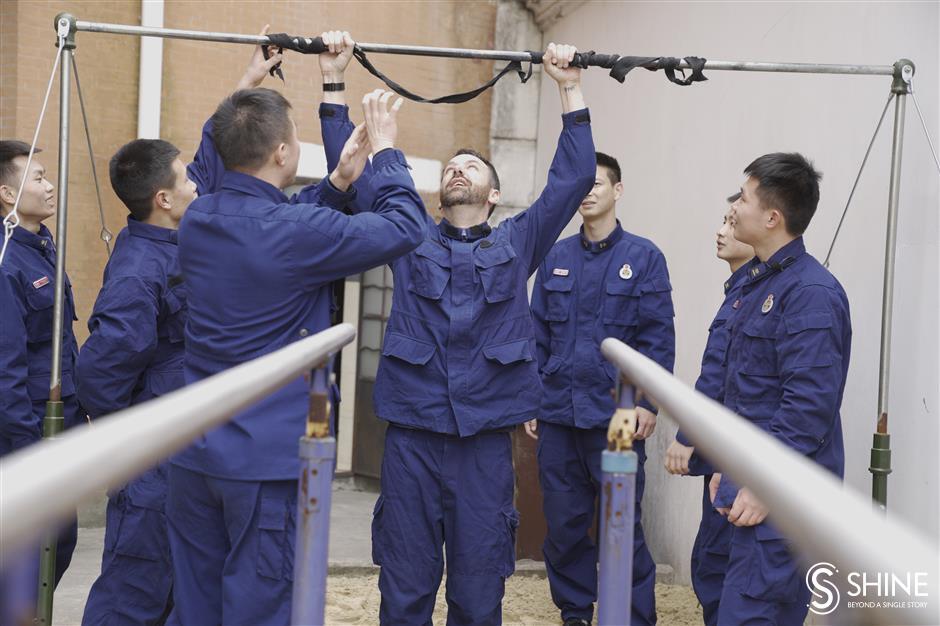 Andy is not strong enough to lift his chin above the bar.

Much to my surprise (and delight), the guys have a nearly two-hour afternoon nap every day, which ensures that they’ve had enough sleep if they suddenly get a fire call-out in the middle of the night. I was out pretty fast, and I sincerely hope that I didn’t keep the other guys up with my snoring.

In the afternoon training session, we started off with warm-ups, and then moved into different exercises including lunging and squats. I probably don’t need to tell you I did badly.

Dinner came in the nick of time since my stomach had been growling at me for a wee bit.

The evenings are rather free for the guys, but they’re still not really allowed to leave the station and do whatever they want. Dajing met with a university professor who comes to give him private chemistry lessons, while others called their family members, read books, played games and chatted.

At around 9pm, the guys will start cleaning up, showering and brushing their teeth and so on.

Whether they’re ready or not, lights must be out at 9:30pm.

My day working at the Hongkou Fire Station was really exhausting and insightful, and that’s without even having to battle any fires or rescue anyone.

I really got a firsthand insight into just how busy their days are, preparing for those times when we need them most. I take my hat off to them.