Only reform can promote quality education 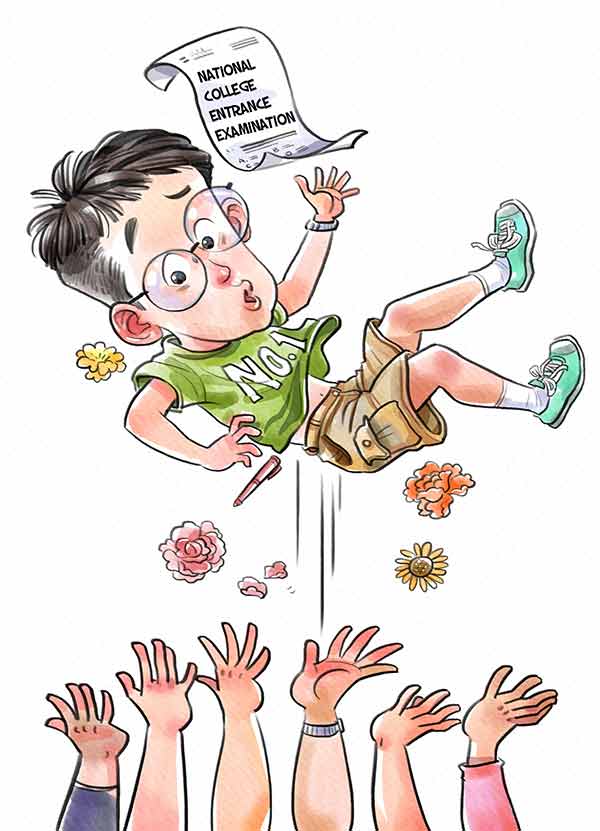 Talking about the 2018 national college entrance examination in a recent video conference, Minister of Education Chen Baosheng forbid local authorities from publicizing the names of the students who receive the highest score. Chen also banned the publicization of the percentage of students from specific senior middle schools clearing the college entrance exam, or gaokao, to curb the tendency of such schools to promote exam-oriented education. And he warned that those who violate these norms will be dealt with seriously.

Hyping the names of the top-scoring students in gaokao, in order to cash in on their popularity has become common in recent years. Top universities use the number of "highest-score students" they enroll to enhance their performance, resulting in severe competition for these students. Besides, media outlets give excessive coverage to such students. Some local authorities, especially education authorities, even include these students' achievements in their political performance, and offer them rewards such as scholarship or free airline tickets.

The ban on publicizing the names of such students shows the ministry's determination to prevent the local authorities and schools from playing up the students' performance to earn brownie points, which has had a negative effect on society.

"The regulation is reasonable, because excessive hyping of 'highest-score students' may intensify the widespread anxiety among students", says Yu Xiulan, a professor at the Institute of Education, Nanjing University. "Excessive hyping of 'highest-score students' is unnecessary, because the score only represents the result of a single exam. In fact, an entire batch of students with top scores is almost at the same level."

The ministry's move also makes clear its intention to improve quality education. "The ministry's ban aims to curb the tendency to evaluate students simply based on (their) scores," says Chu Zhaohui, a researcher at the National Institute of Education Sciences.

But the problem is that students who got very high scores in gaokao are looked up to by the whole society. And since Chinese students' higher education is determined by the score they secure in gaokao, the education authorities' appeal to change the students' exam-oriented education mentality seems weak.

Moreover, although the ministry's ban could prompt the local authorities and schools to change their assessment methods, it can hardly prevent commercial organizations from capitalizing on the achievements of the top-scoring students for commercial events, which can more easily draw the attention of parents and students under the current education system.

As such, the education authorities' ban on hyping the names of top-scoring students is not enough to curb this unhealthy practice. A real solution to the problem lies in reforming the college admission system by, for example, changing the unitary score-based high admission system to a multiple-evaluation admission system.

Chu suggests college admission be separated from gaokao scores, so colleges will have the right to enroll students independently by using a comprehensive evaluation standard.

Xiong, on the other hand, says colleges should enroll students based on their own evaluation system, while the students should have the right to decide which college they want to study in. Citing the United States' higher education admission system as an example, he says that although there is SAT (formerly Scholastic Assessment Test) in the US which is similar to China's gaokao, US universities don't admit students simply based on their SAT scores. "A student with a high score in SAT can be rejected by a university if his or her other performances are not up to the mark…. So there's no concept of 'highest-score students' in the US."

By allowing students and universities to make their choice independently, we can help end the unitary score-based evaluation system, Xiong says.

And Chu suggests the education authorities introduce a professional third-party evaluation system to assess a school's education quality, which in turn will help ease worries about the admission rate.