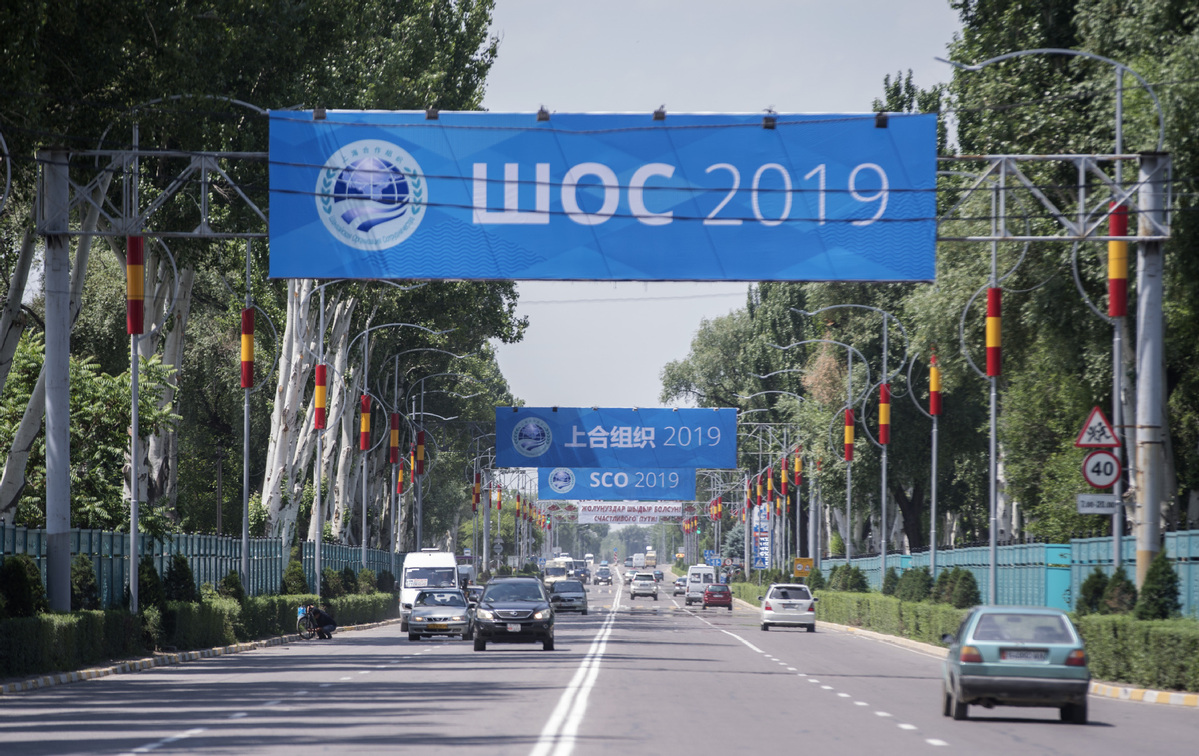 Photo taken on June 9, 2019 shows banners for Shanghai Cooperation Organization (SCO) summit on a street in Bishkek, capital of Kyrgyzstan. The 19th meeting of the Council of Heads of State of the SCO will be held in Bishkek on June 13-14. (Photo: Xinhua)

Since its inception in 2001, the Shanghai Cooperation Organization has developed its organizational structure, built a network of formal ties with other states and multilateral institutions, and furthered the agenda in an incremental way so member states can come up with broader economic, political and security objectives.

Since the establishment of the SCO, the world has undergone several transformations. The SCO member states, including the original members and the newly inducted ones, have seen their national security landscapes change. Security threats have changed on the regional and global fronts, as well.

The medium and focus of cooperation have also changed. Some of the countries that led the "economic revolution" have succumbed to internal and external pressures in the 21st century and lost the ground to emerging market economies. Perhaps this has prompted a change in government in some developed countries and spurred them to implement unilateral and trade protectionist policies.

Against this background, the SCO is holding its 19th summit in Bishkek, Kyrgyzstan, on Thursday and Friday. Which makes this the right time to examine the SCO's development and where it appears to be headed.

To start with, the major powers in the grouping hold the key to address some of the burning issues. Although the SCO aims to bolster the standing of the region based on mutual cooperation, mutual benefit has been facilitated by "major country relationships" within the forum. One substantial change toward which the SCO is moving is the necessity to make bilateral relations and trilateral cooperation mutually reinforcing. The bilateral equations in the India-Russia-China triangle are a critical determinant of the scope and tenor of SCO cooperation.

The India-Russia strategic partnership is based on shared perspectives and economic engagement, particularly in energy. Trade and investment dominate the India-China comprehensive partnership, which also includes cooperation on the international economic agenda. These two bilateral relationships have coincided with the strengthening of the Russia-China strategic partnership with a strong political content and synergy in the field of energy.

But that also means China, Russia and India carry the responsibility of adopting a more structural approach in order to revitalize the importance of forums such as the SCO.

Inducted as a full SCO member in 2017, India adds immense value to this partnership. Since the SCO is primarily aimed at meeting the challenges Asia faces, India is conscious of its rising role within this forum.

The Bishkek summit addresses urgent issues including finding ways to resist some economies' attempts to reverse the trend of economic globalization and create parallel trade models. Beyond trade, the summit also needs to reinforce its commitment to promoting infrastructure connectivity and free flow of investment.

Besides, the summit should emphasize the need to look for alternative models of sustainable development. Speaking at the recently concluded International Economic Forum in St. Petersburg, President Xi Jinping and Russian President Vladimir Putin supported the idea of "creating a sustainable development agenda" by rehabilitating and redeveloping local industries and exploring markets in new areas.

China has taken a lead in Asia as far as artificial intelligence and research and development in technologies are concerned. And the emerging market economies have embraced information and communications technology (ICT) to the benefit of their societies. Still, the SCO member states need to do more to bring optimum benefits of ICT to their people.

India, with a new government in place, seems prepared to cope with the pressure created by the United States' unilateral sanctions and tariffs by looking for new areas of cooperation. It also needs stable supply of energy. So it would like to have more access to the Chinese and Russian markets.

Terrorism is the biggest security threat to the region. The nature and manifestation of terrorism may have changed since the Sept 11, 2001, attacks on the US, but recent terrorist attacks in different parts of the globe show terrorism continues to be the biggest non-traditional security threat for countries.

Forums such as the SCO represent a growing number of countries' goal of establishing or deepening relations with each other so they can join hands to resolve regional issues, which in turn will help resolve international issues.

A balanced set of bilateral relations between China, Russia and India as well as the other SCO member states will lead to more effective cooperation and better promote multipolarity in the world order. Better bilateral awareness of opportunities will enrich the economic relationships between member states. And open bilateral and multilateral dialogues can resolve even the knottiest of issues and make the SCO a more vibrant organization.

The author is a senior research fellow at HSBC Business School, Peking University. The views don't necessarily represent those of China Daily.