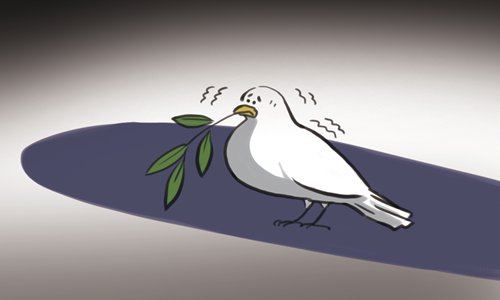 Monday witnessed the opening of the US Embassy in Israel's Jerusalem. US Ambassador to Israel David Friedman optimistically said that "this decision will ultimately create greater stability rather than less," as clashes between tens of thousands of Palestinians and Israel police left at least 62 dead and more than 2,000 injured. There could be even more Palestinians turning to violence and extremism to fight against Israel.

Later, with growing support of the Arab world as well as proactive mediation by countries outside the region, Palestine gained the bargaining chip to negotiate with Israel and the establishment of a Palestinian state through peaceful means became possible. Some Palestinian factions have gradually given up violent struggle and proactively participated in peace talks and regional governance.

Later, ties between Palestine and Israel were stuck in a queer cycle - preparing for peace talks - failing in peace talks - protests and demonstrations - being marginalized by other global hot button issues - preparing for a new round of peace talks. Meanwhile, Palestinians are also at loose ends over choosing violent or peaceful means, and extreme or moderate way to go about their goal.

After the US proposed to be a mediator between Israelis and Palestinians and moved the US embassy in Israel to Jerusalem, the dream of peace talks of a majority of Palestinians has been shattered. The relocation of the embassy implies that Washington officially recognizes Jerusalem as the capital of Israel, which makes Palestine lose hope of appealing to the world to recognize East Jerusalem as its own capital.

Palestine is facing challenges - at home, it has not achieved internal reconciliation and does not have enough strength and leverage to negotiate with Israel, and abroad it lacks the backing for peace talks. Even major nations, such as the US, which offered to help mediate differences between the two countries, can hardly win the trust of Palestine. Fair peace talks can only be an extravagant hope for Palestine any time soon.

Therefore, violence will once again become the choice of many Palestinians. As hope is lost in peace talks, Palestine has limited choices - compromising with Israel or resorting to armed struggle against it. Given the long-term ethnic contradictions, most Palestinians would prefer the latter.

After protests against the US move to shift its embassy failed, attacks against Israelis near the settlements in Jerusalem are likely to increase.

In addition, some Palestinian violence may be tinged with extremism. Due to regional turmoil, poor development and spread of extremism in the Middle East over the past few years, Palestine has also seen the emergence of Islamic extremist factions. Ordinary Palestinians used to reject extremism. But once armed struggle becomes the only way out, extremism may sneak in, distorting the Palestinian national liberation movement and complicating the crisis.

Is Trump creating greater stability or a larger powder keg? It remains to be seen.