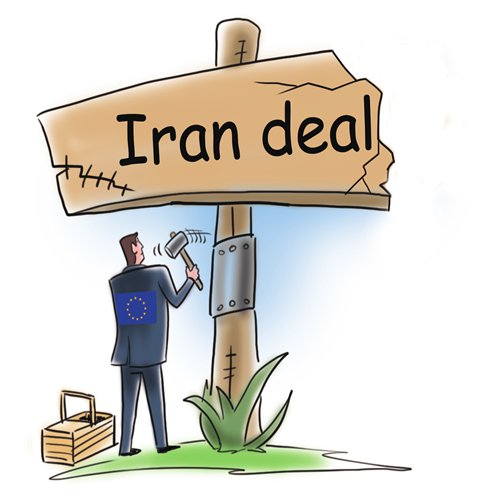 US President Donald Trump's vaunted withdrawal from the Iran nuclear deal on May 8, leading to re-imposing of sanctions lifted under the accord, has triggered strong displeasure among European countries.

In a joint statement, French, German and British leaders regretted the US decision. They reiterated their "continued commitment" to the Iran nuclear deal, stressing that the agreement "is of particular importance to our shared security." The US move has again undermined the interest of European states, a heavy blow to EU-US ties after World War II.

Trump's decision to pull the US out of the agreement is undoubtedly a unilateral step that has shaken the credibility of the international community. It is also a manifestation of Washington's proclivity to advance its own interests at the cost of its EU allies. Such a move has jeopardized US-EU efforts to strengthen multilateralism, promote common values and develop shared interests after WWII.

The EU has been frequently hit by the "America First" doctrine through US tariffs on steel and aluminum imports and Trump-generated fracas over the NATO defense budget. The potential political, economic and security fallout of Washington's decision to ditch the Iran nuclear deal has further upset the EU. Obviously, Europeans are frustrated by French President Emmanuel Macron and German Chancellor Angela Merkel's failure to win over Trump over the Iran nuclear agreement during their visits to the US.

Trump's announcement to withdraw from the deal and re-impose sanctions on Iran has hurt the EU's economic interests. Trade volume between the EU and Iran rose from 9.2 billion euros ($11 billion) in 2015 to 25 billion euros in 2017 after the agreement. However, the US move has dealt a heavy blow to European firms eyeing more inroads into the Iranian market.

As the US controls the dollar settlement system and trade between Iran and other countries needs to be settled in the greenback, foreign companies in business ties with Iran could be punished for violating US sanctions. In 2014, French bank BNP Paribas paid an $8.9 billion penalty, a record sum for the bank accused of doing business with countries including Sudan, Cuba and Iran that face US sanctions.

The revival of the European economy has benefited from the downturn in world oil prices since 2014, but geopolitical turbulence in the Middle East will likely raise the oil bill. Brent crude oil prices, following Trump's announcement, rose by 3.15 percent to $77.21 per barrel and may further go up. The Spanish government estimated that if the barrel price rises to $75, it could result in a -0.7 percent decrease in the GDP and 150,000 job losses. Euractive, an EU media outlet, even used the headline - "Trump becomes number one threat to European economy."

Europe has also suffered political and security setbacks. Trump's meddling in Syria, the Iran nuclear issue and the Palestinian-Israeli conflict have upset Europeans who understand the importance of stability in the Middle East in ensuring peripheral security after the Arab Spring uprisings. If Trump's decision to leave the deal propels Iran's nuclear development and involvement in regional competition, the EU will bear severe consequences of a regional nuclear weapons race, the escalating conflicts in Syria and Yemen and the worsening of the refugee crisis and terrorism.

US withdrawal from the Iran nuclear deal has hit EU's endeavor to promote multilateral diplomacy and address the Middle East issue. Besides, the Trump administration's cozying up to Israel and Saudi Arabia through the Iran nuclear issue at the expense of its traditional European allies has undermined the EU's dignity.

The EU will continue to adhere to the Iran nuclear agreement and protect Iran from further sanctions. Some European leaders are negotiating with Iran's President Hassan Rouhani to seek remedial measures while urging him to show restraint. However, due to the US' financial outreach and economic sanctions, trade relations between the EU and Iran will be significantly restricted. Therefore, more efforts from other countries are needed to save the deal.

China and the EU have played a significant role in reaching the Iran nuclear agreement and maintaining peace and stability in the Middle East. The two sides also share the goal of safeguarding multilateral international rules and systems. It's believed China and the EU can find a reasonable way of developing business ties with Tehran and preventing the Iran nuclear issue from spiraling out of control.