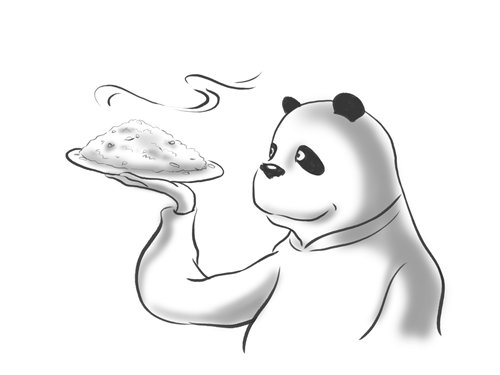 When US President Donald Trump and North Korean leader Kim Jong-un sat together for a working lunch on Tuesday, they saw two Chinese dishes on the menu - Yangzhou fried rice and sweet and sour pork. I wonder how the Singaporean waiters described the food to the statesmen, but they must have used the term Yangzhou.

These are Chinese dishes, but their flavor wafts across the world. Chinese restaurants in all parts of the world have them on the menu. Fried rice in Thai, Malaysian and Indonesian cuisine resembles the international Chinese favorite. Trump and Kim must have known about the two preparations.

Ordinary Chinese are used to seeing the two dishes, especially Yangzhou fried rice, in restaurants. They are not special cuisine but common traditional food.

I have been to Singapore several times and eaten in Chinese restaurants of all types. Generally, these sell food from the south of China, especially Teochew and Cantonese cuisine with lots of snacks. With frugal ingredients, it is quite different from the food that Chinese eat on the mainland.

Yangzhou fried rice is a dish with simple ingredients and is easy to cook. Honestly, it developed from frying the leftover rice. I am not sure whether this character of the dish was introduced to the two leaders.

It is said that in the past, boatmen on the Grand Canal often cooked excess rice for lunch and fried the leftover with an egg for supper. Gradually, people started to add ham, shrimp and meat and then was born today's Yangzhou fried rice.

Chinese cuisine is a crown of world culture. Its way of cooking and taste has a long history. The charm is in its history that is replete with examples of how it has improved over generations to get its color, smell and taste.

Chinese food has spread around the world with the efforts of generations of ethnic Chinese and has become the most influential part of the nation's culture.

It is not strange that the state banquet in Singapore offered Yangzhou fried rice. It is a reflection of the culture of the small country that mainly consists of ethnic Chinese.

You can have all kinds of food in Singapore - Chinese, Malaysian, Indian, French and Italian. Openness, flexibility and diversity are foundations of the country's success.

But the main fare of any region is related to its diet tradition. Although many snacks in Singapore have changed over time, they cannot get rid of the Chinese influence.

The way Yangzhou fried rice is cooked in Singapore may be different, with possibly some other ingredients added. The point is, the dish is named after the Chinese city of Yangzhou, which will definitely be recognized by the two leaders.

During the Trump-Kim summit, Ivanka Trump tweeted a "Chinese proverb," which goes, "Those who say it cannot be done, should not interrupt those doing it."

Many Chinese do not seem to know the proverb and some netizens translated it into Chinese as a popular web remark, "If you can do it, go for it. If you can't do it, then don't criticize it" or literally "you can you up, no can no bb."

When Trump and Kim ate Yangzhou fried rice, it reminded me of a traditional Chinese saying: "You are what you eat." It is a diet therapy developed by the Chinese over thousands of years.