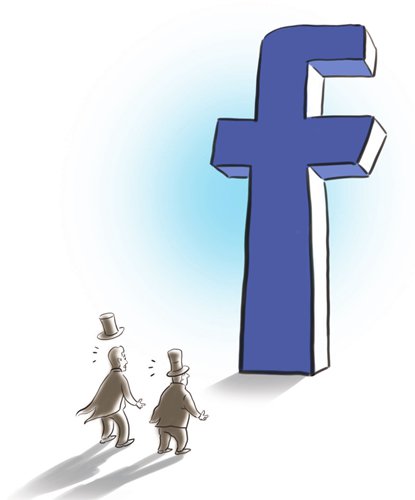 Facebook Chief Mark Zuckerberg appeared before the European Parliament on Tuesday to answer questions about leakage of personal information of millions of Facebook users. Meanwhile, the US Justice Department and the Federal Bureau of Investigation have opened probes into Cambridge Analytica, the now-defunct firm at the center of the Facebook data scandal. Investigations in the US and Europe reveal Western anxiety over the tremendous change in the way that political system operates in the digital age.

For a long time, the impression has gained ground that in the US almost everything is tradable. This is especially true of politics, and scholars have even studied tradability in US politics.

The Facebook data scandal has not only shown that US politics could be bargained, but also reflects American political anxiety in the digital age.

Although Zuckerberg had faced tough questions in a two-day congressional testimony in the US, and the European Parliament requested his appearance, this does not take away from the seriousness of the scandal.

The scandal is huge because more than 50 million Facebook profiles have been used, endangering internet security which cannot be left just to apologies. The scandal also irritated people because as a third party, Cambridge Analytica used personal information taken without authorization to influence more than 200 elections around the world, including the 2016 US presidential campaign.

With the scandal exposed, traditional US political elites have become more upset because the data could in certain way be associated with US President Donald Trump who is not a political elite. Some media outlets even suggested that Trump won against Hillary Clinton with the help of big data. US elites realize that the way US politics used to operate, which they were familiar with, has endured a fundamental change.

Politics in the US and other Western countries used to rely on politicians, media and speeches at rallies. Political parties would send popular politicians to the election campaign to attract voters. Politicians would publicize their opinion through traditional media by writing articles, giving interviews and publishing advertisements to win votes. They would also address public assemblies to maintain the so-called "close interaction" with the people. Nevertheless, they could only gauge their support through opinion polls.

However, the Facebook data leakage scandal shows that the traditional pattern was overturned by politics of the digital era. According to reports, Robert Mercer, a billionaire who supports Trump, is the major donor behind Cambridge Analytica. Steve Bannon, Trump's former chief strategist, was once on the board. According to a whistle-blower in the consulting firm, Cambridge Analytica would use the data for psychological profiling and hand the result to Trump's campaign team.

If all this is verified, Trump's team did master a new set of effective digital propaganda in the election. Targeted political news and advertisements can be fed to those who have been portrayed by the big data. Thus, Trump's incoherent and contradictory statements can be explained as propagating different messages to different voters. In other words, his surprising actions might be reasonable. Besides, digital mass persuasion also resolves the big issue of propaganda and mobilization. Clinton's loss in 2016 was by no means accidental.

However, such digital propaganda drags the US into political anxiety. It is of doubtful legality and security, and has become far more than a privacy issue as it risks billions of people's information, property and even lives. Furthermore, it concerns many other countries' national security. Such information can be used to manipulate an election and even overthrow a government.

Meanwhile, politics will become more unpredictable, for there will be more dark horses in an election only because they are aware of people's political stance and preferences.

Conventional and effective political analysis might be inaccurate if such propaganda works. Those who use the data for psychological profiling are unpredictable, because they will deliberately act against people's expectations when people's thoughts have been bared.

People still need time to understand newly-born big data's influence on politics. They should be prepared to pay the price.