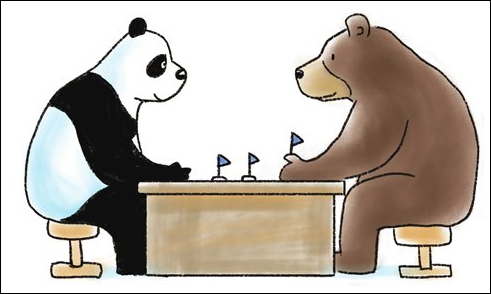 Rosneft Vietnam BV, a unit of Russian state oil firm Rosneft, recently had oil drilling operations in a disputed area of the South China Sea, according to reports. Chinese Foreign Ministry spokesman Lu Kang reaffirmed China's opposing stance on the issue. Some Russian media regard it as a sign of deterioration in bilateral relations, as China would normally not criticize Russia. Although the oil drilling issue may not greatly affect China-Russia relations, we still need to pay attention to the consequences.Since the 18th CPC National Congress, China and Russia have seen their ties improve further, with mutual respect and trust in politics and security, complementarity in economy and collaboration in global issues. In 2016, China accounted for 52 percent of Russia's global cross-border e-commerce. In the first half of 2017, the volume of e-commerce between the two countries stood at about $1.6 billion, an increase of 26.6 percent year on year. Russian netizens' online orders of Chinese goods have seen a five-fold increase year on year. While China and Russia strengthen economic cooperation in a traditional way, they also explore new markets. The Arctic region is one of their important goals. The Yamal LNG plant's first train was operational at the end of 2017, marking a big progress in China-Russia joint construction of the "Ice Silk Road." The two countries will also cooperate in the Binhai 1 and Binhai 2 international transport corridor and the construction of Zarubino Port. Strategic and long-term cooperation between China and Russia won't be easily spoiled by the recent oil drilling issue.Despite the mutual political trust, sound cooperation between China and Russia is based on their respect for each other's core interests. As the South China Sea is an inherent territory of China and concerns China's core interests, it deserves respect from Russia.Russian president's spokesperson Dmitry Peskov said afterward that Rosneft did not consult Kremlin on drilling in the South China Sea. Although the Russian government is unaware of the drilling, it is the two countries' responsibility to control emergent issues that may influence their cooperation. While Beijing and the Kremlin strengthen cooperation, they should communicate in advance over sensitive issues. Russia should stay neutral on the South China Sea issue.If such incidents can't be controlled or avoided, mutual trust and cooperation between the two countries will be affected, even if the current situation prevails. China and Russia share a border winding over 4,000 kilometers. In 2008, the two countries unveiled boundary markers delineating the eastern section of their frontier, which marked the complete resolution of territorial disputes. As China's biggest neighbor, Moscow's stable relations with Beijing are not only related to the security of China's northern and northwestern border, but also to the stability of the whole of Eurasia. The hard-earned mutual trust should not be damaged by anyone, including the two countries' companies.To protect bilateral relations, it is important for China to set forth its core interests. Rosneft said it conducted its operations on the continental shelf of South China Sea in accordance with license obligations and stated that the offshore license areas of Rosneft are situated within the territorial waters of Vietnam. However, what it obeyed was Vietnam's one-sided obligations. No drilling in the disputed South China Sea should be allowed without China's permission. Russia's state-operated Russian-language news agency RIA Novosti said that China warned the Russian firm against drilling off Vietnam. It is obvious that both the Russian firm and media are influenced simply by Vietnam's stance, which goes against China's interests. While urging the parties concerned to adjust their stance, China should clearly set forth its own core interests as well.The sky is the limit for Sino-Russian cooperation, and we must continue to make relations even better. China has been Russia's largest trading partner for seven consecutive years, and the two share huge potential in development. The South China Sea drilling issue may not have impacted ties, but the two countries should take it as a warning and keep controversial moves under check. Small incidents might have bigger repercussions, and the two countries need to protect the hard-earned trust.