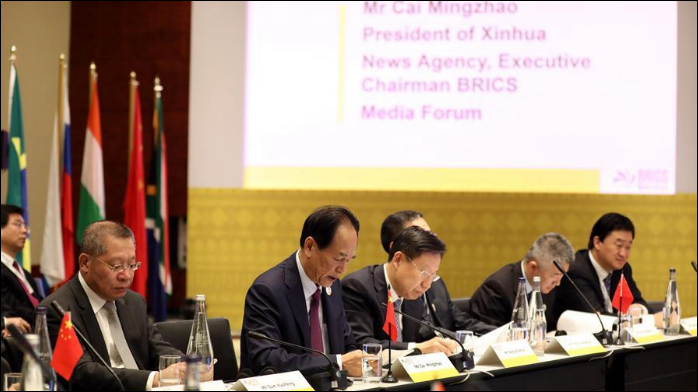 The former US Senator Daniel Patrick Moynihan was famous for declaring, “Everyone is entitled to his own opinion, but not to his own facts.”

That’s a simple and profound statement. But the reality in our modern world is a bit more complicated.

In order to form opinions, we need to have facts. And facts, as has become painfully obvious in the Era of Donald Trump, are often the subject of heated disagreement.

Indeed, Trump’s own counselor, Kellyanne Conway, on January 22 coined the term “alternative facts” to describe a falsehood masquerading as truth. Opinions and pre-conceptions all too frequently make their way into international media coverage.

The truth is that the concept of truth – of objective reality – varies based on your source of information. When it comes to coverage of China and the developing world, the information readers around the world receive is greatly dependent upon their news source.

My data journalism students in the Global Business Journalism Program at Tsinghua University for the past three years have been analyzing global coverage of Chinese economic issues.

And it is an inescapable conclusion that news consumers get vastly different views of China depending on the media source.

For example, our data from the spring of 2018 indicated that fewer than one in ten stories appearing in American news outlets presented a positive view of the Chinese economy and business, while about one of every five reports in European news outlets was positive.

In the developing world – the BRICS nations and Pakistan – about one of every three stories was positive. In China, a majority of coverage carried a positive tone.

That doesn’t mean that the international coverage of China was negative. American and European media coverage was decidedly balanced: 63 percent of the coverage in both regions was neutral in tone.

The coverage of the ongoing US-China trade dispute has been overwhelmingly neutral.

Still, our findings show the challenges facing developing nations as they try to present their messages of economic growth to the rest of the world.

It is sometimes difficult to break through the skepticism and pre-conceptions that are deeply ingrained in international reporting. But some media organizations from some of the world’s fastest-growing economies are trying to do just that.

It preceded by a week the 10th BRICS summit scheduled July 25 to 27 in Johannesburg, South Africa.

According to Xinhua, the goal is to foster dialogue among media of these nations and “promote the BRICS spirit that champions openness, inclusiveness, cooperation and win-win, as well as to push forward friendly exchanges and pragmatic cooperation among BRICS media.”

That dialogue has to begin with facts and open discussion of the issues and challenges of our increasingly interconnected global economy. To report effectively about today’s complex and rapidly changing economic climate, it is necessary for journalists to understand what is happening in both developing and developed countries.

That begins with reporters who have a strong fundamental knowledge of economic and financial issues, whether they are from Johannesburg, Shanghai or New York.

It also requires media practitioners to gain a deeper understanding of the workings of global economics, not just through the lens of Washington or London but also through the perspective of people in Bangalore, India, Gansu Province, China, or Soweto, South Africa.

As a journalist and journalism educator who covered global economic issues in Washington and teaches at Tsinghua University in China, I have always thought that the world can only improve by cross-cultural communication and deeper understanding of others’ economic, political and social systems.

In today’s interdependent world, it’s not just desirable, it’s imperative for journalists who want to effectively and fairly report on economic issues.

That’s one reason I’m so proud of the Global Business Journalism Program at Tsinghua, of which I am co-director.

Over the past decade, we have trained students from more than 60 nations in global economic journalism. We’ve taught students from all of the BRICS nations, plus countries as varied as Iran and Israel, Pakistan and Germany, Zimbabwe and the United States.

This intercultural experience at a world-class Chinese university has produced a new generation of journalists with a better understanding of China, the changing global economy and other people’s cultures.

We can’t guarantee, in the words of Daniel Patrick Moynihan, that we will agree with our opinions. But it is a positive first step toward agreeing on the facts.