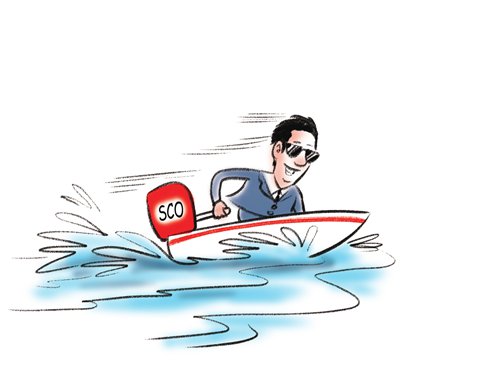 The SCO summit in Qingdao over the weekend has been convened for the first time after the admission of India and Pakistan as full members in June 2017. The membership expansion itself is the latest demonstration of the Shanghai Spirit, which was formed on the basis of Shanghai Five, a multilateral forum founded by China, Russia, Kazakhstan, Kyrgyzstan and Tajikistan in Shanghai in 1996. The spirit was affirmed before the establishment of the SCO. It emphasizes mutual trust, mutual benefit, equality, consultation, respect for cultural diversity and pursuit of common development. It is not a military group like NATO that is aimed at defense against the outside world, but a real organization. The Shanghai Spirit can help promote global governance and has set an example for the international community. Quite a few arguments over the entry of India and Pakistan can be heard in the international community and most of them are negative. India and Pakistan are two important nations, their joining the SCO is therefore significant. With three emerging powers - China, Russia and India - included, the SCO has got a boost in its size. The admission of India and Pakistan will be a shot in the arm for political influence of the SCO. It also shows how cohesive and attractive the organization is. Otherwise, who would be willing to join it? Some international organizations have seen their members withdrawing, but with the SCO it is different - there are quite a few countries willing to join. Openness is one of the principles of the SCO. Hence, there will be more member states to join the fold in the future. Of course, the SCO also needs some time for the new enrolments to sink in. Security and political cooperation will be the focus of the SCO in the future, because security is not just about the region, but the entire world. Without peace and stability, there would be no development. After the expansion, the SCO needs to pay closer attention to the peace and stability of a larger area. China will also give top priority to security and political collaboration under the framework of the SCO. When it comes to practical cooperation, Beijing has increased the level of interaction with other SCO member states after President Xi Jinping proposed the Belt and Road initiative. But it is clear that we have not achieved ideal results in some regions over certain issues. It is normal. The initiative is trying to link quite a huge area, across which each country's development levels are different. After the 2008 financial crisis, marked changes were seen in the regional economic landscape. Certain elements are impeding the momentum of development in the region. But now the situation has started to change. The SCO member states have begun to reach consensus. It is believed that after this summit, a series of crucial agreements will be inked over practical collaboration. The Agreement on International Road Transportation Facilitation was signed in 2014. It means construction of infrastructure among member states has already been linked. The question now is how to improve connectivity.