Opinion: One more impetus for multilateralism 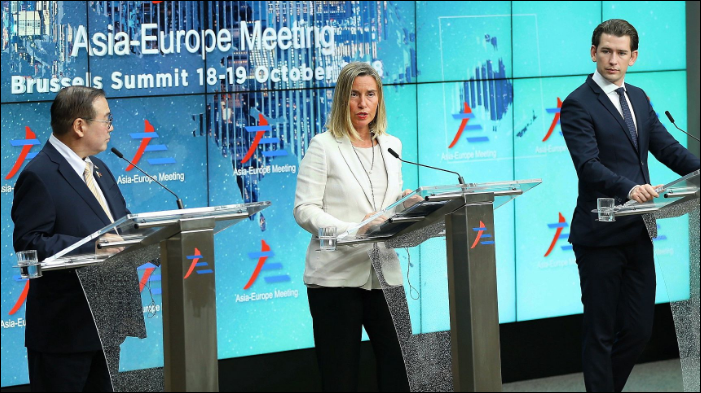 The Asian-Europe Meeting (ASEM) logo expresses the idea of interaction and cooperation between Europe and Asia through the intertwined forms of an Asian brush-stroke and a simplified letter "E".

It's quite evident that the letter "A" signifies Asia and the letter "E" stands for Europe, while the blue color symbolizes Europe and red represents Asia.

The logo showcases the willingness of the two continents to interact and cooperate with each other.

The thought behind this logo has become more relevant in today's world as Trump administration is actively pushing unilateralism, protectionism and breaking international norms causing greater uncertainties in the world.

Titled "Global Partners for Global Challenges", the 12th 2018 ASEM summit endeavored to strengthen the dialogue and cooperation between the two continents in a wide range of areas.

The most important topic at the summit, which brought together leaders of 51 European and Asian countries, was world trade.

The past several months have witnessed US' Trump administration waging a trade war against many of its major trading partners including China and the European Union (EU).

At the summit, Asian and European leaders seemed to have formed a united front in support of free trade based on international rules and cooperation, thus sending out a clear message to the Trump administration.

Some commentators even viewed the 2018 ASEM as an "anti-Trump" meeting.

Federica Mogherini, High Representative of the EU for foreign affairs and security policy said, "We have our agenda, it's a very clear agenda that supports multilateralism, starting from the UN system, climate change action, trade — free and fair — non-proliferation and international agreements that support the non-proliferation global architecture."

In international relations, it's economic cooperation and multilateralism — not unilateralism — that serves everyone's interests, especially in the age of globalization.

Javier Solana, former EU High Representative for foreign and security policy, former Secretary-General of NATO, and former Foreign Minister of Spain noted in a 2016 article that Trump promised to pursue unilateral and inward-looking solutions, but all of his policies ignore a crucial fact that in today's world, turning inward is not a viable option.

"We are simply too interconnected; the problems, challenges, and opportunities we face have no regard for national borders," said Solana.

There is a strong rumor that Trump is contemplating the possibility of withdrawing from the World Trade Organization (WTO). If this rumor becomes a reality, multilateralism would be the biggest casualty.

But will the US gain anything from abandoning multilateralism?

Will the US benefit from unilateralism and trade protectionism?

The answer to these questions is "No".

Many analysts have predicted that if the trade war, started by the Trump administration does not stop soon, the world economy will sink into a recession.

And as the US economy heavily depends on the performance of the world economy, a recession would soon hurt the US as well along with other economies.

Chinese Premier Li Keqiang in his address at the 12th ASEM Summit said, that Asia and Europe, two of the most important contributors to the growth of the world economy, must undertake more responsibility to maintain world peace and promote global prosperity.

He put forward four proposals where he said that Asian and European countries should play a leading role:

--safeguarding multilateralism by maintaining the rules-based world economic order and protecting the authority of the UN;

--pushing the world economy forward in an open way by upholding globalization and respecting the economic interests of the developing countries;

--vitalizing people-to-people exchanges between themselves.

According to Li, as a developing country, China is faced with the problems of inequality and underdevelopment in certain areas. In face of harsh external conditions, China will continue to push forward reforms and opening wider to the outside world.

At the same time, as Li stressed, it will also keep strengthening the protection of intellectual property rights and create a first-class investment environment for domestic and foreign investors.

In his address, Li also mentioned the notion of building a community of shared future for mankind. Put forward by Chinese President Xi Jinping, this idea has been welcomed by the international community.

Therefore, every country must deepen dialogues and cooperation so as to safeguard the environment of world peace and stability and ensure world economic recovery. Isn't it a stark contrast with Trump's "America first" slogan?