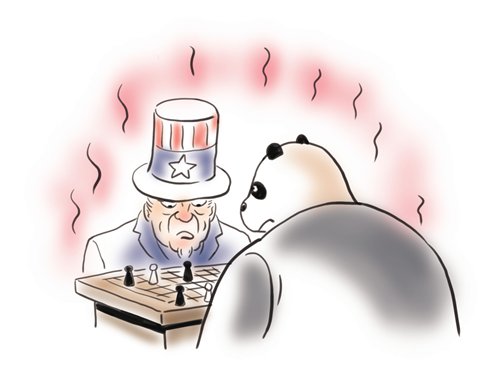 Amid flaring trade tensions between the US and China, US Treasury Secretary Steven Mnuchin is heading to China to negotiate on trade. At the International Monetary Fund and World Bank spring meetings on Sunday, he said he was "cautiously optimistic" of reaching an agreement that defuses the trade dispute.The trip by such a key figure at such a critical moment will help ease trade tensions. However, the game between China and the US might just be starting, and the somewhat positive signal the US sent may reflect various purposes.First, the US hopes to prevent the situation spiraling out of control. China has firmly taken a series of strong countermeasures against US moves including a tariff list under Section 301 investigation, the accusation that China is misappropriating US intellectual property and sanctions on ZTE Corp. After sounding China out, the US realized that Beijing would indeed fight to the end unless the US called a halt.Once the US started the trade war, there will be no winner in the end. Now that the US is evaluating the tariff list under Section 301 investigation, it is a perfect time for China-US negotiations. Taking a softer stand at this point would help avoid further trade retaliation.  Mnuchin's coming visit shows that the US wants to negotiate as well as pressure China. Previous disputes between the US and its principal trade partners started with the US exerting pressure. Then the US further negotiated to gain economic benefits and the problem was solved. Without exception, after US President Donald Trump's several rounds of provocation, he needs negotiation for a showdown. Therefore, the real negotiation between China and the US has probably only just begun, and it's far too early to label the US as making any concessions. It can also be asserted that the US is dependent on the China market and opportunities. Amid the trade dispute, the Subcommittee on International Trade, Customs and Global Competitiveness of the US Senate Committee on Finance held a hearing on April 11. Attendees at the hearing said that China holds the largest middle class in the world, and offers great opportunities to the US.       Mnuchin's coming visit might also ease domestic pressure on Trump caused by the fomenting Russiagate investigation, an unstable administration team and the upcoming midterm election. Trump was planning to win American people's hearts by acting tough on China, but this backfired. Congressmen, industrial associations and experts censured Trump for his tariff policy. Against this backdrop, the Trump administration has had to change its tough stance.Mnuchin's announcement marks a positive change and China should prepare well for it. China needs to seek pragmatic cooperation. The Ministry of Commerce has responded positively to Mnuchin's upcoming trip. If in this visit the US can negotiate under the principle of reciprocity and equality, China will also show its best faith. China and the US should restart the Comprehensive Economic Dialogue mechanism or set up a temporary consulting platform to resolve the differences and reach a consensus. Negotiation is the only way to find a solution and will bring about a win-win outcome.  China has to maintain its strategic vigilance. The US has fundamentally changed its strategy toward China and defined the latter as a rival. The series of trade moves Trump took recently show that the US wants both economic interests and superiority of economics and technology to curb China's rise. Trade disputes between China and the US will be unavoidable in the future. Fighting and negotiation will both become frequent in ties between the two countries. This requires China to maintain its utmost strategic patience and confidence.If negotiations don't work out, Trump is likely to continue pressuring China with tariffs, restricting Chinese companies in technology, mergers and acquisitions and investment. Washington will likely tighten high-tech exports and visa policy for China and collaborate with other countries to press China on trade. China should prepare for these potential threats.At the same time, China needs to stick to reform and opening-up and economic restructuring. It needs to work harder on investment in technological innovation, fostering enterprises that can move up the global industrial chain and avoid the potential economic and industrial pitfalls. China welcomes negotiation and is not afraid of fierce rivalry.