OPINIONS Opinion: Self-interest for nations does not lead to wealth of nations

Opinion: Self-interest for nations does not lead to wealth of nations 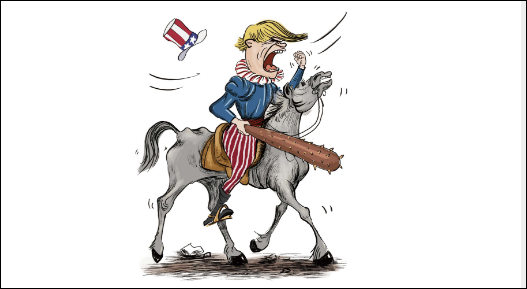 Trade disputes between the US and China are ongoing. President Trump has expressed his threats of imposing tariffs on 505 billion dollars' worth of Chinese imports. Trump administration intends to solve the trade deficit by putting tariffs on the products of its trading partners, including China.

They think the US businesses can gain price competitiveness in the domestic market, which in turn will bring about trickle-down effects on the US economy such as creating new jobs. But, as many economists see, the concept is misguided and it will only benefit some of the US companies in the short term.

Indeed, trade rows inevitably lead to declines in real income and domestic demand of the involved parties. We will witness, as a result of the trade disputes, the economy shrinking as a whole such as the decrease in GDP and fewer jobs in both sides.

In the end, this game obtains a prisoner’s dilemma where everyone suffers a loss. In that regard, the dispute will not last quite so long and we can see a compromise being made at some point.

As for South Korea, trade disputes between the two giants will impact its economy in a negative way. Considering the global supply chain, South Korea exports components, that is, intermediary goods to China where they go through the production process and China exports finished goods thus processed to the US.

In that regard, if the domestic demand of Chinese products in the US drops because of the tariffs, the demand of components in China drops accordingly, which results in the decrease of South Korean exports to China.

So, the implication is that South Korea is more sensitive to China in terms of trade disputes. And we can also notice similar situations in other Asian neighbors like Japan, Vietnam and Singapore etc. though the extent of the impact varies.

From macroscopic viewpoints, the phenomenon makes sense in that China contributes to the global economy as production plants as well as gigantic markets. South Korea, as well as other Asian neighbors, will find a way to diversify their export markets in response to the trade disputes.

Even though they will face some hurdles in the implementation, they will eventually strive to establish their markets in countries such as Brazil, India, Russia, and ASEAN members besides China.

They will move in that direction anyway, but certainly, the recent trade disputes have sped up the pace. And they will not have much discretion on monetary policies for fear of leading to more severe economic downturns, thus in turn, creating a new unstable factor of financial turmoil since they are not able to take proper responsive measures in that aspect.

Whilst it is nothing new to refer to the comparative advantage when we talk about international trade, we can still ask why they go backwards, invoking tariffs on goods when everyone is discussing FTAs and movement of labors.

Consumers in every country generally benefit from free international trade, whereas protectionism tends to be formed by political drives and serve particular interests. Therefore, it usually does not continue for long.

As the global economy works on the basis of the WTO regime, deviation from it could affect the world economy more adversely than previously expected.