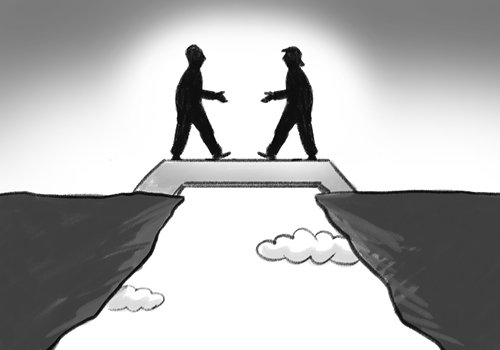 Editor's Note:The summit between North Korean leader Kim Jong-un and US President Donald Trump in Singapore on Tuesday has grabbed international attention. What's the significance of the event? What will North Korea and the US likely do to cement the outcomes of the summit? The Global Times reporters Li Qingqing and Luan Xuan talked to two Chinese experts.

Da Zhigang, director of the Institute of Northeast Asian studies at the Heilongjiang Academy of Social SciencesThe Singapore summit was held in a cordial atmosphere, turning enemies into friends and raising hopes that the two countries will talk further. As a young leader born in the 1980s, Kim showed his amiability. He toured around Singapore on the night of June 11 and took a selfie with the city-state's Foreign Minister Vivian Balakrishnan. Kim and Trump have both shown high expectations from the summit and mutual respect during their historic meeting. For example, Trump briefly held Kim's shoulder over the course of their 12-second handshake and gave a "thumbs up" to the North Korean leader. Kim was courteous and smiled through the proceedings. All this sent peaceful signals and created a cordial atmosphere for their meeting. Despite possible disagreements during the negotiations, the two countries are sincere in talking to each other.Before the summit, US Secretary of State Mike Pompeo said that complete, verifiable, irreversible denuclearization (CVID) is the only outcome the US can accept in negotiations on North Korea's nuclear program. That would be too idealistic a result. While leaders of the US and North Korea hadn't met in decades, complete denuclearization can't be reached through only one summit. As long as North Korea promises to work toward complete denuclearization, the US may eventually approve of Kim's decision even though it is not immediate CVID. After all, the Singapore summit has already been a historic achievement in itself, since the armistice agreement made in 1953 didn't put an end to hostilities between Washington and Pyongyang. To say the least, the summit will initially dispel antagonism and facilitate communication between the two sides in the future. There may even be the possibility of setting up liaison offices. Trump was optimistic during talks with Kim. He said the meeting was "very good," and they will "solve a big problem." It's reasonable to believe that the summit will convert the state of truce on the peninsula into a peaceful mechanism. Although it can't be accomplished in one meeting, it is what North Korea and the US are happy to accept and the international society is willing to push forward. The international community needs to support North Korea's denuclearization and recognize US efforts in this process. The world, including Northeast Asian countries, should take into consideration North Korea's security concerns as well as the living conditions of the country's people to together work for complete denuclearization.China has influence on North Korea in terms of geopolitics and economy. The two countries share traditional friendship and China always welcomes peaceful negotiations between North Korea and the US. Denuclearization is also one of China's bottom lines. It is not only related to the US' interest, but also the interest of Northeast Asian countries. It needs multilateral efforts to eventually resolve the peninsula issue. Trump needs to turn to multilateralism to win further support of US allies and the international society.

Su Hao, director of the Asia-Pacific Research Center at the China Foreign Affairs UniversityTrump and Kim signed a "historic" document at the momentous summit, with the US leader calling it "pretty comprehensive." The Trump-Kim joint statement declares that North Korea is commited to work toward "complete denuclearization of Korean Peninsula." The summit has had a substantial effect, as expected. The meeting was held because Pyongyang and Washington had agreed on denuclearization. The precondition for denuclearization is to clarify the stance and principle.In the summit, North Korea reaffirmed its commitment to complete denuclearization as asked by the US, which will lay a sound foundation for the peace process on the peninsula. In this sense, the summit carries immense significance.Due to the midterm elections in November, Trump does have his own interests. But I think his main aim is to secure a historic position by pushing forward the denuclearization process of the peninsula. He has long-term vision. If denuclearization can be achieved, Trump will not only create a good impression on the world but will also have an edge in the midterm election. As long as denuclearization of the peninsula continues moving forward, it is unlikely that Trump will waffle on his North Korea policy. After all, he wants to make denuclearization a part of his political legacy. Unless Pyongyang makes a U-turn, there are slim chances of Trump changing his stance.Trump wants denuclearization to happen fast with marked outcomes in every phase. This needs the US and North Korea to bargain with each other through talks. Hence Trump has also realized that only one meeting will not resolve the issue and sounded optimistic about future talks with North Korea. The success of the Singapore summit will lay the ground for future talks.Pyongyang hopes to obtain security guarantee and economic benefits by improving relations with Washington. The US and North Korea will both take full advantage of what they can get to maximize their own interests. It will depend on what step the two countries take next. I believe both will not be too pushy. China and North Korea have normal state-to-state relations. They share common ground to promote North Korea's reform and opening-up. Beijing's support is vital for Pyongyang to leverage on Washington. North Korea will deal with its relations with China and the US in a reasonable manner in the future.