OPINIONS Opinion: Tehran Summit: A cul-de-sac for terrorists in Syria

Opinion: Tehran Summit: A cul-de-sac for terrorists in Syria 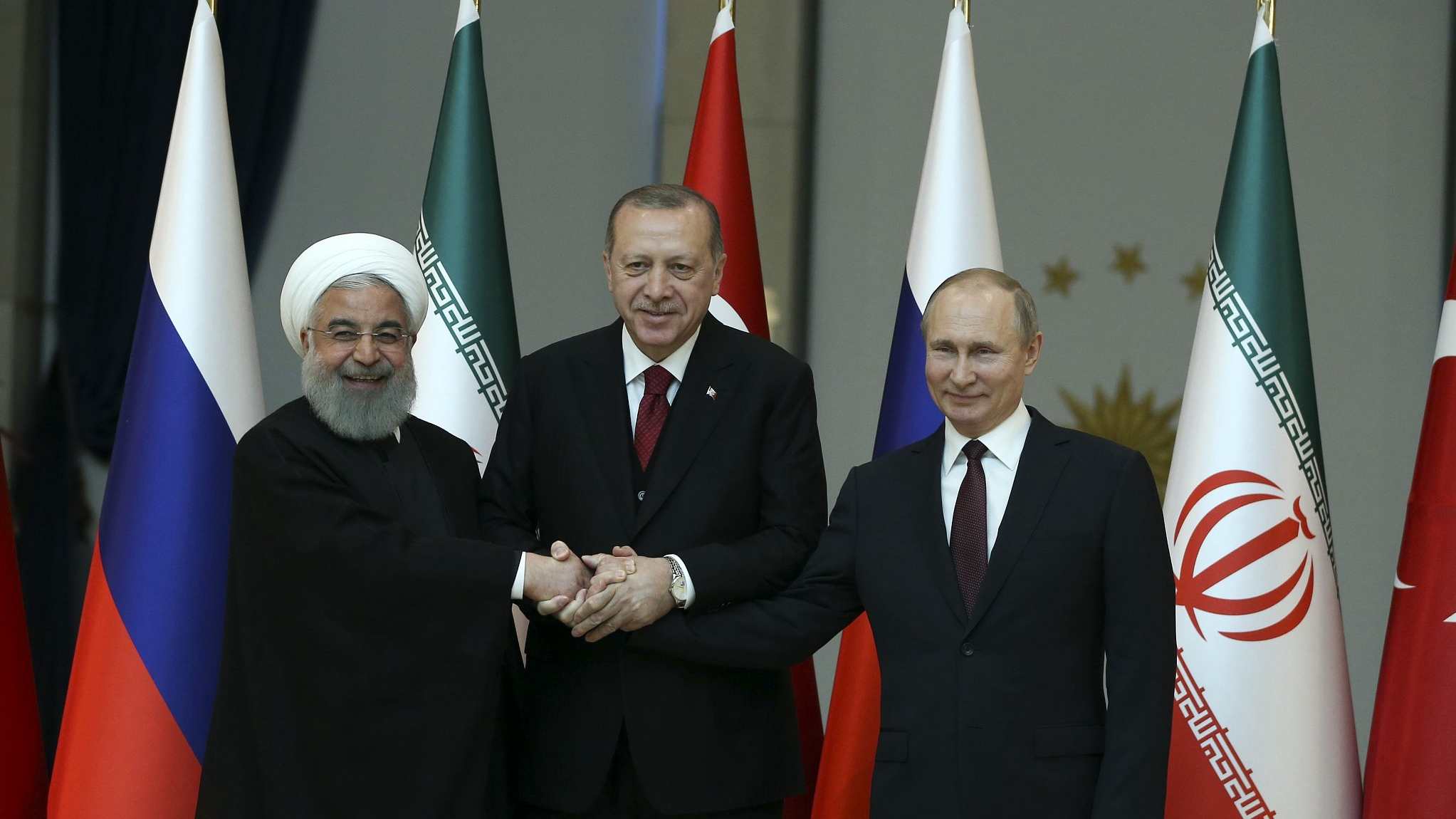 Editor's note: Ghanbar Naderi is an Iranian columnist and political commentator. The article reflects the author's opinion, and not necessarily the views of CGTN.

The three leaders met in April 2018 in Ankara and in November 2017 in the Russian resort city of Sochi, where they discussed developments in the war-torn Arab country. The third round of their tripartite summitry in Tehran, among other things, is intended to shape the future of Idlib province, home to Syria's last major rebel bastion.

Iran and Russia are the main allies of the Syrian government and their military actions have tipped the balance of the seven-year war in favor of Damascus. Turkey backed rebels seeking to oust the Syrian government, but since late 2016 it has been working increasingly closely with Iran and Russia to bring peace to Syria – a decision that hasn’t gone down well in Washington.

The tripartite summit is a working visit, intended to end the conflict. The three leaders have agreed to consider further joint efforts to ensure long-term normalization of the situation in the Arab country.

This includes bilateral talks and discussing further measures aimed at finally liquidating the hotbed of international terrorism in Syria, where according to the United Nations the conflict has killed more than 400,000 people since 2011, and made millions more refugees.

The discussions are looking further at promoting the process of a political settlement with the opposition groups (not Salafi, Takfiri, Wahhabi terrorists), including creating the conditions for the return of refugees and the internally displaced.

This is because unlike the United States and its allies which seek to prolong the war, Putin, Rouhani and Erdogan back the Syria peace talks based in the Kazakh capital of Astana (Astana Process), aimed at reinforcing, rather than undermining, a parallel UN peace process in Geneva.

Up in the air

Things have changed and the US influence in Syria and the region is up in the air.

Despite all the best diplomatic efforts by Secretary of State Mike Pompeo, for instance, relations between the US and Turkey have visibly deteriorated. The mood began to sour when Turkey arrested an American pastor allegedly for spying. Then came President Donald Trump’s decision to recognize Jerusalem as the capital of Israel and move the American embassy there from Tel Aviv.

The US is also reluctant to lift its sanctions or cease its support to the Syria-based Kurdish Democratic Union Party, which has declared autonomous rule in northern Syria and which the US is supplying with arms.

Turkey has said no to US sanctions against Iran and believes the US military equipment transferred to the PYD will eventually end up in the hands of its main domestic Kurdish insurgent group, the PKK – recognized as a terrorist organization by Turkey, the EU and the US. All this has become a serious sticking point, and it’s only getting worse.

On the other hand, Iran and Russia cannot normalize the situation in Syria if Turkey is not on board. The good news is that Turkey is looking for new allies and is in the opposing camp. Ties are warming between Turkey and Russia, even though they supported opposing sides in the war and Turkey shot down a Russian warplane.

Now thanks to the Tehran summit, Erdogan backs a Russian-Iranian truce plan for four areas in Syria and has sent troops to assist in its execution. All in all, the Tehran summit means the collaboration and common interests between Putin, Erdogan and Rouhani “is really making someone jealous.”

No province for terrorists

The summit comes at a sensitive time. Defying Trump, Russia has resumed air strikes against rebels in the northwestern Idlib province. The Syrian Army is also preparing a phased offensive to regain the "nest of terrorists."

The province and surrounding areas represent the last major enclave held by Qaeda-allied insurgents fighting the Syrian government, such as the Nusra Front. They are home to some three million civilians.

With foreign-backed rebels and terrorist groups still operating there, the government cannot start rebuilding the country. Damascus cannot put in place the legal and regulatory authorities to implement its vision of reconstruction as a process of stabilization when the country is still in the midst of various regional and international tensions and rivalries.

With its military victory close at hand in Idlib, the government can then use reconstruction to reimpose law and order, and achieve a “healthier and more homogenous society and economy.”

For all intents and purposes, the Tehran summit means the structure, governance and organization of post-conflict reconstruction in Syria are settled issues. The government has consolidated its dominance over the levers of reconstruction, rendering it virtually impervious to external pressure.

The American hope, however modest, that rebels in Idlib might someday permit external actors to engage in partition programming in Syria, or through interventions influence the course of reconstruction and political process, is deeply misguided and out of picture.

Drawing a line in the sand

The tripartite summit in Tehran is destined to end the seven-year conflict and liquidate the hotbed of international terrorism in embattled Syria. No doubt about it.

It will help normalize the situation, promote and complete the process of a political settlement, create the conditions for the return of refugees and internally displaced, herald international reconstruction support and funds, and take away any remaining pretext for the United States and its allies to occupy the country for eternity.

This does in no way mean that the countries that have the money and which traditionally fund such large-scale financial efforts, namely the Persian Gulf countries, the European Union and the United States which have lost the war, cannot be part of the peace process and reconstruction efforts.

Under international law and the United Nations charter, these countries are required to put money in and transfer funds to Syria, a country they wrongfully helped to destroy in the name of freedom and democracy.

If you want to contribute and have a specific expertise, please contact us at opinions@cgtn.com.