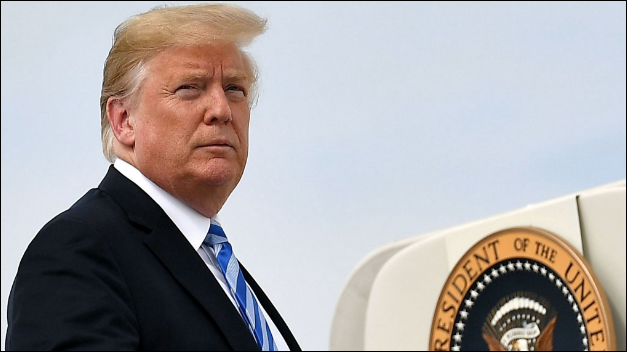 The president of the United States, besieged by scandal, was fending off charges he had obstructed justice. Wagging his index finger and slapping his palms, he angrily denied the charges. “I’m not a crook,” Richard Nixon said on Nov. 17, 1973, nine months before he resigned in disgrace.

For the first 197 years of the American republic, Nixon, an unindicted co-conspirator in the criminal cover-up of the bungled break-in at Democratic Party headquarters in the Watergate building, was the only president accused in court documents of being a criminal conspirator. Until this week.

Now, Donald Trump stands accused of the same felonious intent that felled Nixon, and much, much more, in a metastasizing legal and political scandal that has transfixed late summer Washington.

On August 21, Trump’s longtime lawyer, Michael Cohen, pleaded guilty to eight felony charges and told a judge the president had directed the payment of hush money to buy the silence of two women who claimed to have been involved in sexual affairs with the then-candidate. On the same day, Trump’s former campaign chairman, Paul Manafort, was convicted of eight criminal charges that could send the 69-year-old lobbyist to prison for 80 years.

On August 23, the Wall Street Journal reported that David Pecker, publisher of the Trump-allied National Enquirer, and his top lieutenant are cooperating with prosecutors after winning immunity from prosecution. The Associated Press revealed that the celebrity gossip tabloid maintained a safe containing documents on hush money payments and other damaging stories about Trump that it had killed. Meanwhile, the New York Times reported that the Manhattan district attorney is considering charges against the Trump organization and two senior executives.

Then there’s the Russia mess. Cohen’s lawyers say he is prepared to link the president to a 2016 meeting in Trump Tower with emissaries of the Kremlin seeking to tilt the 2016 presidential election to the Republican candidate – the original allegation that led to cascading criminal probes into Trump’s businesses and his personal and political lives. The Russian connection is sure to surface at Manafort’s Sept. 17 trial on additional charges connected to financial dealings with pro-Russian oligarchs and alleged witness tampering.

Trump’s critics see the recent blockbuster headlines as a turning point in the Trump presidency. “This is crumbling around him, this criminal enterprise that he led for many years,” said Michael Avenatti, lawyer for a adult movie actress who said she had an affair with Trump shortly after his wife Melania gave birth to their son in 2006.

A furious, sleep-deprived Trump tweeted his response at 1:10 a.m.: “NO COLLUSION – RIGGED WITCH HUNT!” Rattled by his long-time friends’ decisions to cooperate with prosecutors, Trump warned of an American economic collapse if he is forced from office. “If I ever get impeached,” he told a friendly interviewer from Fox News, “the market would crash. Everybody would be very poor.”

For Trump, the escalating scandal comes at a particularly delicate time in his presidency. Internationally, he has alienated many traditional American allies by deriding multinational institutions and pacts, and he has created global economic uncertainty by launching trade wars with China, Canada, Mexico and Europe. Domestically, Trump’s Republican Party is bracing for major setbacks in the 2018 midterm elections on Nov. 6.

History is not on Trump’s side. In the past 21 midterm contests, the president’s party has lost an average of 30 House seats and four Senate seats, enough to flip both chambers of Congress to the Democrats. Polls indicate that Democrats are far more enthusiastic about voting than are Republicans. A Fox News survey conducted between August 19 and 21 concluded that Democrats “are in a strong position” in the midterms, with an 11 percentage-point lead over Republicans nationally. A computer model created by FiveThirtyEight.com gives Democrats a 72 percent chance of taking the House.

Republicans, who control the Senate by two votes, have one factor working in their favor as they try to avoid a Democratic sweep: Of the 35 Senate seats up for election this year, just nine are held by Republicans. Making things even harder for Senate Democrats, 10 of their incumbents are seeking re-election in states carried by Trump in 2016. Most analysts still believe Republicans maintain an advantage in the Senate, but incumbents including Ted Cruz of Texas and Dean Heller of Nevada are struggling to escape a toxic political climate.

Trump is counting on maintaining the party loyalty that has characterized his presidency. A Gallup poll conducted August 13 to 18, before the recent legal developments, found that 87 percent of Republicans approve of Trump’s job performance. But intraparty divisions are becoming more common as endangered Republican incumbents seek self-preservation. Representative Ryan Costello, who represents a Pennsylvania district carried by Hillary Clinton in 2016, distanced himself from Trump’s venomous denunciations of federal prosecutors. “It is a legitimate investigation,” the pro-Trump Republican said.

“Nonsense,” responds Trump counselor Kellyanne Conway, who blames the US media for demonizing Trump and stirring up “fantasies” of presidential impeachment. Trump's advisers believe that their coalition of white working class voters, economic nationalists, and right-wing religious fundamentalists will rally behind the embattled president come November.

But history tells another story. Nixon never recovered politically from the day in early 1974 when seven of his closest associates, including his campaign manager, White House lawyer and chief of staff, were indicted for crimes that sent each of them to prison.

As much as Trump may seek “to turn our gaze away from his criminal cabal,” as former Obama administration Ambassador Patrick Gaspard tweeted on August 23, the multiplying criminal probes may prove hard to contain.