OPINIONS Opinion: US should focus on its own human rights violations

Opinion: US should focus on its own human rights violations 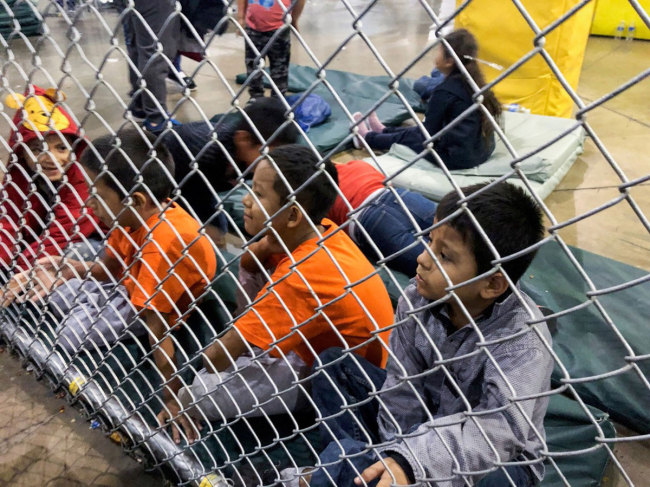 Detained children sit on pads behind cyclone fencing at the Central Processing Center in McAllen, Texas, on July 13, 2019. (Photo: IC)

An article by the China Society for Human Rights Studies called the United States hypocritical when it comes to human rights, pointing to the problems of racial discrimination in that country. Following the release of the article, an opinion piece published by Commentaries on International Affairs on Saturday has said that the United States should focus on solving its own human rights issues and quit slandering other countries.

According to the commentary, America has been using claims that it is protecting human rights as an excuse to demean and intervene in the internal affairs of other countries, while at the same time ignoring the serious human rights abuses in its own country that are caused by racial conflicts deeply rooted in American culture.

American society has witnessed numerous cases when the basic rights of minority groups have been infringed on, said the commentary. It offered as an example the repeated incidents in recent years of young people from ethnic minority groups being assaulted or shot by police across the United States.

Quoting figures from the Federal Bureau of Investigation, the commentary pointed out that hate crimes in the United States increased by 17 percent in 2017, the third consecutive year that the number of hate crimes increased. The most common hate crimes were those committed against someone on the basis of their race, with African Americans and Jews the main victims of these offenses. Instead of taking effective measures to curb the increase in hate crimes, the author says, some American politicians are instead fostering even more racial discrimination.

The author says that, despite the bad behavior of the United States government, an American official has denounced China's policies in the Xinjiang Uygur Autonomous Region and the Tibet Autonomous Region.

In response to the accusations, on July 26, ambassadors from 50 countries co-signed a letter to the President of the United Nations Human Rights Council and the High Commissioner for Human Rights to the United Nations Office in Geneva to voice their support for China's position on issues related to the Xinjiang Uygur Autonomous Region.

The commentary concludes that, given the domestic chaos that has resulted from the deep racism in American society, not to mention the widening divide between the poor and the rich, and problems of sexism, the United States should pay more attention to solving its own human rights issues and quit slandering other countries.