Opinion: Will Trump and Kim reach a binding peace deal? 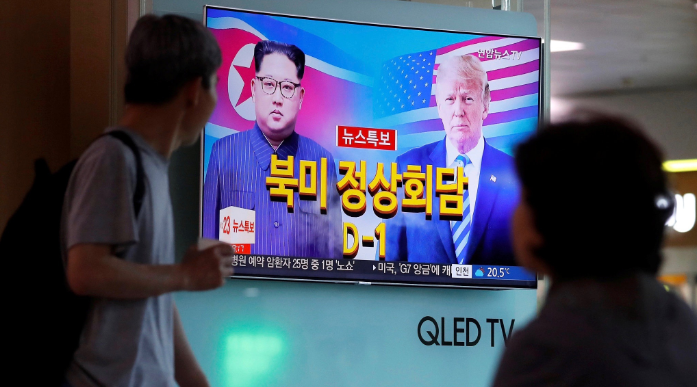 Kim Jong Un and Donald Trump both arrived in Singapore on Sunday for the first ever summit between leaders of two countries technically at war for nearly seven decades.

Before departing the clamorous “G6 plus one” in Quebec City on Saturday, the US president warned Kim that the historic meeting would be a “one-time shot” for the Democratic People’s Republic of Korea (DPRK) at denuclearization and peace and prosperity. “It's a one-time shot, and I think it's going to work out very well. That's why I feel positive because it makes so much sense,” he said, brimming with confidence.

Previous to this, Trump indicated the possibility of signing a Korean War peace treaty with Kim, which he claimed was “the easy part.”

Across the pond, a media outlet from the Republic of Korea (ROK) quoted insiders in Washington and Singapore as saying that Trump, Kim and ROK President Moon Jae-in will declare a formal end to the Korean War at a three-way meeting, which, though, remains unconfirmed by the ROK’s Blue House.

However, it seems such preconceptions are no more than wishful thinking. First, the US and the DPRK are still at odds over the path to denuclearization. Top US diplomat Mike Pompeo, in his recent utterances, reiterated the White House’s call for Pyongyang to completely rid itself of all nuclear weapons in an irreversible manner before receiving relief from economic sanctions.

Instead, he suggested enacting a package of security assurances in parallel with Kim’s denuclearization developments.

What the DPRK wants is to gain sanctions relief during a phased-in process of dismantling its nuclear arsenal. Despite the diplomatic scrambling over past months, Pyongyang has not given way on this position. But as long as the UN sanctions are in force, it’s impossible for the country to engage in the activities of international organizations and to obtain massive foreign investment to bolster its economic growth.

Moreover, the two sides – the DPRK and the US-ROK alliance – have no right to clinch a peace treaty. On July 27, 1953, the bloody Korean War ended in a truce signed by the US military representing the UN Command, and the military representatives of China and the DPRK. Since then, hostilities have been frozen but the two Koreas have been in a state of quasi-war.

If they sign a de jure peace treaty, it means the 65-year-old armistice deal must be annulled. But with the absence of China, how could it be abolished?

“Even if a peace deal is reached, it’s not legally binding because the truce remains effective,” said Da Zhigang, director of the Institute of Northeast Asian Studies at Heilongjiang Academy of Social Sciences.

Lyu Chao, director of the Border Study Institute at the Liaoning Academy of Social Sciences, agreed with Da, adding that declaring an end to animosity and an aspiration for peace is beyond reproach. “In any case, a bilateral or a tripartite accord like the Panmunjom Declaration is very welcome,” he told CGTN.

“Something big, something bold,” as Pompeo said about the Singapore summit during a Friday interview, may not happen. In a sense, it’s not a gamble between Kim and Trump, and possibly Moon, it’s a multiplayer game involving all regional stakeholders.

Nonetheless, the two are unlikely to part on bad terms as both are eager to secure their own interests. Kim needs to boost domestic economic development, promote his people’s wellbeing and secure his government. Trump, needless to say, is yearning to turn himself into the “greatest president for jobs that God ever created.”

Moreover, around 70 percent of Republicans show support for the summit. If he really cranks some substantive results out of it, he will secure more votes for the mid-term elections, Da told CGTN.

Kim and Trump will likely, if the meeting goes smoothly, lay down a concrete timetable and roadmap for the DPRK’s denuclearization. In this case, they must refrain from dialing back on their promises and foster mutual strategic trust.

Furthermore, “they are also expected to start negotiations on normalizing their diplomatic ties,” Da said. A normalized relationship will be of enormous significance to both sides.

For Trump, he’s moving closer to his dream of winning a Nobel Peace Prize. For the DPRK, after normalizing relations with the US, Japan will follow its US ally to establish diplomatic ties with the country. By then, Tokyo will join Beijing and Moscow in providing massive economic assistance for Pyongyang.

If Trump and Kim can achieve the above-mentioned progress, it’s a really wonderful start. But a “one-time shot” at the island resort of Sentosa makes no sense if China is not a part of the process.

For 65 years, Panmunjom has been the most heavily fortified border in the world. Tensions lasted into 2018 even when Kim extended an array of diplomatic overtures to the US-ROK alliance, who, nonetheless, did not hold back in their annual military drills.

From six-party talks to “dual suspension,” Beijing has played a significant part in preventing an actual war from breaking out in the cockpit of Northeast Asia. It’s also noted Kim arrived in Singapore by Air China, a diplomatic routine in which one country sometimes borrows airplanes from a traditional friend.

Negotiation over a peace deal is an arduous, complicated process involving border demarcation, compensation for sacrificed soldiers, and mutual recognition, among a spectrum of political, economic and military issues.

A de jure treaty of peace will take many years and multilateral efforts.