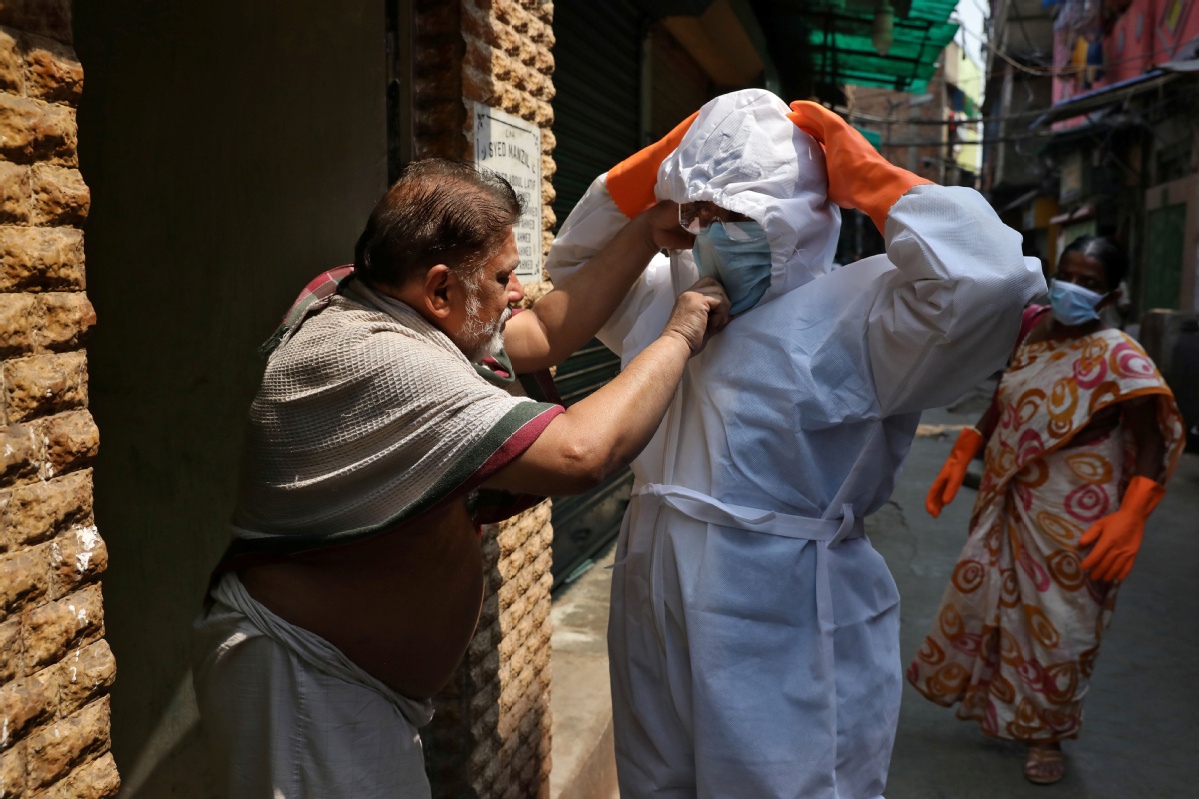 A resident adjusts the face mask of a health worker during a sanitization drive to control the spread of the coronavirus in Kolkata, India, on Thursday. (Photo: Reutuers)

On April 14, the last day of the 21-day lockdown imposed across India to contain the spread of the novel coronavirus, the Indian prime minister announced in an address to the nation that the lockdown was being extended till May 3. Which means India will be under lockdown for 40 consecutive days.

Detailed guidelines were issued on April 15 and, according to plan, the situation has been reviewed to allow some business relaxations, which kicked in on Monday. Chief among them is the opening up of road transportation for essentials and non-essentials. Some industries had already been allowed to begin limited operations.

Many in India are disappointed with the Indian government's focus on reminding citizens of their duties rather than giving a clearer indication of what the government is going to do to address untold hardships caused to millions of people－migrant workers and the poor in particular.

Citizens certainly have to be mindful of their duties, most importantly following stay-at-home orders and maintaining physical distancing when outside to prevent and control the spread of the virus. Given that citizens have shown exemplary responsibility, their duties need not have been belabored. Rather, the outlines of a plan, minimally, should have been made known to ease the stresses felt in the face of this extraordinary emergency.

The four-hour window provided on March 24, when the lockdown was first imposed, has meant that the poor, especially migrant workers, have suffered and are still suffering great privation. The migrant workers had no way of making arrangements for returning home, which they needed to do because the lockdown deprived them of their livelihoods.

Thus, they were ultimately faced with three situations. Some managed to return home, among them many walking hundreds of kilometers. Some were detained in transit and housed in camps/shelters. Yet others were stuck in the places where they worked. Each group faces particular problems, but common to all is the loss of income, which means that they and their families are facing hunger, if not starvation, because the government's relief measures in terms of food and/or cash disbursements have at best been insufficient and at worst non-existent.

The first group is perhaps the best off. Even if the migrant workers who returned home have no income, being at home means at least a roof over their heads and in some cases support from the local government or the community. The flip side, from the larger perspective, is that they may have unwittingly carried the virus into rural areas, where testing, isolation and treatment facilities, again, are either inadequate or absent. That could yet prove disastrous.

The second group is stuck in overcrowded camps, where the injunctions to shelter in place while observing physical distancing and hygiene practices like washing hands frequently are totally meaningless. They get food, but questions abound over the quality of nutrition provided, and, of course, they cannot send money home, the primary cause for migrating.

The third group is perhaps worst off. Deprived of incomes and running out of whatever little savings they might have had, these migrant workers are finding it impossible to fend for themselves, forget sending money home to families on the breadline. They have the additional burden of having to pay for accommodation and in many places are finding it difficult to venture out of whatever shelters they have because local people blame them for spreading the disease and even attack them.

Apart from these groups, there are non-migrant workers in the unorganized sector. In totality, almost 90 percent of the Indian workforce is employed in this sector. A preponderant majority, whether self-employed or wage workers, have lost livelihoods. The government is yet to take up the slack.

All these people would have expected ameliorative measures from the government. The migrant workers also want arrangements made for them to go home. The Indian government has urged employers to be considerate and issued a directive to them to keep the employees on their payrolls and pay salaries. But this won't help the majority of the workers, migrant or otherwise.

India is in the fifth week of lockdown. And the only relaxation for the poor is that workers, especially those involved in agriculture, can move around within their provinces. In the absence of public transport, this concession is likely to have a limited impact.

The lockdown is necessary from the perspective of public health, but it's not really going to help if people die of starvation rather than the disease.

Given the socio-economic structure of India, the government needs a strict but humane policy to contain the outbreak.

The author is a senior journalist and independent researcher based in India. The views do not necessarily represent those of China Daily.