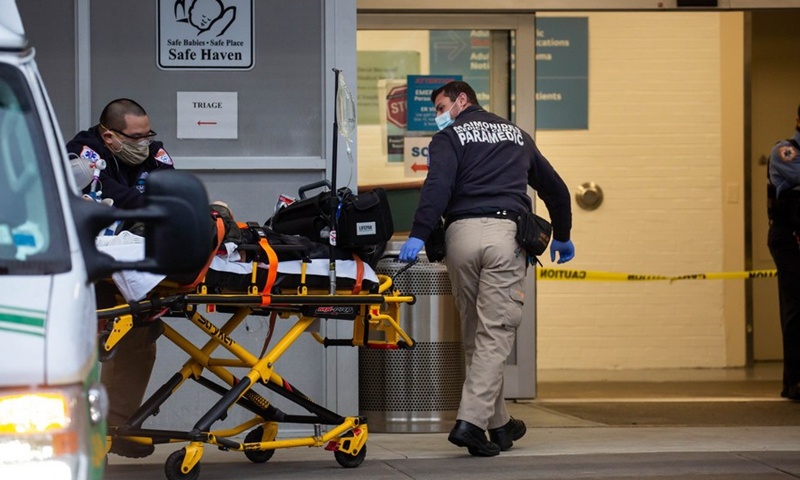 Healthcare workers roll a patient into the emergency room at Maimonides Medical Center during the COVID-19 pandemic in the Brooklyn borough of New York, United States, Dec. 14, 2020. (Photo: Xinhua)

In the last week of 2020, Beijing reported a new local case of COVID-19 infection for the third time after outbreaks in February and May. The case was found two kilometers away from my home. The community where I live suddenly became nervous. Over 300,000 people in the neighborhood all got nucleic acid tests within two days, and those who contacted with positive tests were all tracked and isolated. It has become more stringent to enter the community and buildings here. The number of people on the streets has decreased significantly too.

About 10 days later, the Beijing municipal government announced that the city had basically controlled the new round of the epidemic. The new wave was once again defeated under the close cooperation of the government, society, organizations and individuals. This reflects another poignant moment of human evolution.

Actually, the evolution of human beings can be compared to an overloaded cart moving forward. Humans must constantly adapt to the invasion of diseases, beasts and natural disasters. Only when individuals, organizations, governments and societies work together in the same direction can progress be possible. Otherwise, we all face the predicament of being "overloaded" and stagnating - as well as greater catastrophes.

East Asian nations such as China, Vietnam, Japan, and South Korea have dealt with COVID-19 better than states in Europe and the US. Governments, societies, organizations and individuals in East Asian countries have reached a value consensus: "life is more important than freedom." We are now pushing forward the "cart" in unified direction.

By the contrast, European and American societies are divided at present. Too many personal and inflamed ideological claims are now weakening efforts to contain the virus. This bureaucratic and social crisis has been mounting for years, making Europe and the US look like an overloaded old car.

British scholar David Held warned about the problem of the "overloaded state" in his 1987 book Models of Democracy. This book, known as a must read about democratic theory, was later revised to increase research and understanding of deliberative democracy with Chinese characteristics. But the criticism of the overloading of European countries and the US remains unchanged.

This criticism can be called the "Held Trap." My understanding of the term is that with the improvement of living standards, people's expectations have become too high. But the policies of political parties have concentrated too much on the so-called interests of their voters.

Government's power cannot cover all their people. As such, social values continue to split, leading to the failure of the system on which economic and social affairs depend. Many Western countries are falling in a stagnant abyss.

The pandemic is proof that European countries and the US have been stuck in the "Held Trap." For Chinese people, it is unthinkable that so many people in Europe and the US lack self-discipline and repeatedly emphasize their so-called individual freedoms. It is also inconceivable to see so many quarrels between politicians and social organizations in Europe and the US - let alone many politicians stigmatize other countries due to ideological reasons.

By the end of 2020, over 700,000 people had died due to COVID-19 in Europe and the US where the most advanced healthcare systems in the world reside. The death toll is likely to surpass 1 million by the spring of 2021. It is no wonder that some people have asserted that the COVID-19 pandemic has become a crisis of the West and democracy.

To get rid of the "Held trap," the powerful role of government in allocating resources is now clearly indispensable. Governments should make and implement orders. People need to fully cooperate with them as responsible citizens. This is the enlightenment of "overload theory" for the current crisis of democratic countries.

In other words, any country that is moving forward should find a balance between order and freedom, between power and responsibility, and between individual and collective interests. A good balance can sustain a country's development. In a major crisis, the libra zodiac symbol of balanced weights needs to tilt toward one side. A properly chosen program should give way to effectiveness. Also, freedom should give way to lives. And arguments should give way to cooperation.

This reminds me of American political scientist Francis Fukuyama's words in his book Political Order and Political Decay: From the Industrial Revolution to the Present Day. He said that both emerging countries and established democracies need to face a major task: to provide the substance of what people want from government.

These include "personal security, shared economic growth and the basic public services [especially education, health care and infrastructure] that are needed to achieve individual opportunity."

Government and society should provide the substance of what people want, as mentioned above. There is hope that the people Europe and US can perceive this ever-evolving concept.