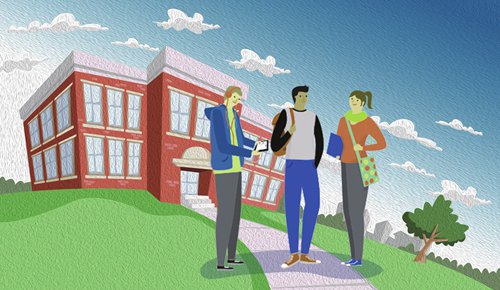 I went to the US as an exchange student nursing a fear as anti-America sentiment was all-pervasive in South Korea in 2005. It followed the mowing down of two teenage girls by a US military truck.

In 2008, as China was gearing up for its Olympic Games, I moved to this mysterious country to learn the language.

One common thing I learned from the experiences of living in these two countries is that the best way to understand culture and society is people-to-people exchange.

Therefore, the vibrant exchanges between South Korea and China, one of the most active perhaps, is something I'm really excited about because often those people with first-hand experience become great civilian diplomats who can bridge the gap between two different cultures.

That is why I'm not too concerned about a recent report that said there is anti-China sentiment around South Korean campuses.

According to recent news reports, conflicts between Chinese and Korean students are surfacing. Some students complained about an exotic environment at school due to the increasing presence of Chinese students. A 19-year old college student, who was assigned with three Chinese students to a dorm room, was quoted as saying that he felt he's in China.

Some complain about the lack of language fluency among Chinese students. This happens because universities accept students whose Korean is not up to the mark for college education. When Korean students are paired up with Chinese students with little Korean skills to undertake group projects together, they are not happy about it.

Second, South Korean universities need foreign students to fill out their quotas and to boost global presence. With the decrease in population, the total number of South Korean colleges would be too many for the size of high school graduates in 2021. This is part of efforts to boost global presence with the number of international students, which is an evaluation criteria by the education ministry.

As a solution, some experts suggest that people should understand cultural differences and try to be tolerant. I think how schools perceive foreign students can help solve the problem sooner rather than later.

The competition among Korean students to get accepted is fierce because they now have to compete within a smaller quota allocated for Korean nationals. But Chinese schools' reputation suffered and some students had to struggle in the job market.

Granted, Chinese students contribute to the coffers of universities in a major way. But schools should bear in mind that reckless enrolments will cost them their reputation. After admissions, colleges should do their best to manage overseas students because at the end of the day what students become after graduation is linked to the reputation of schools. In the long term, this may help the sustainable growth of a school.