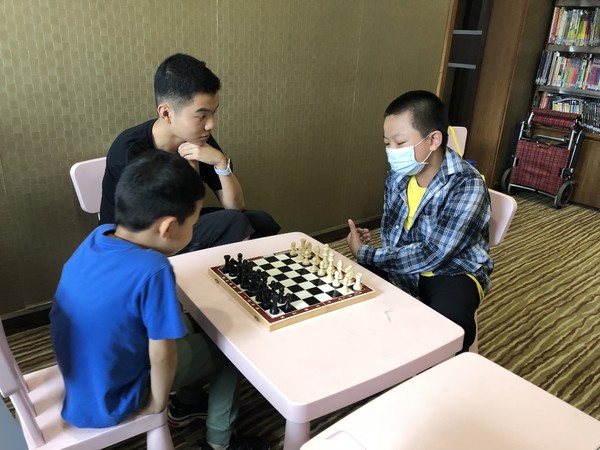 An undated photo shows a palliative care volunteer (second from left) plays chess with sick children at an activity center for kids with terminal diseases in Beijing. (File photo)

People tend to bypass the issue of death when being confronted by this harsh reality. Especially in China, like a monster imprisoned in the gloomy dungeon, death is always a taboo topic.

However, like a dim light in a pitch dark tunnel, a group of volunteers in Beijing is working to shed a light on this ominous topic among cancer patients, particularly children with terminal diseases. What they have been doing is known as palliative care.

Childhood is the best part of one’s life. It is the time to enjoy the beautiful sunshine, the charming streamline, and the gorgeous skylines. But it is definitely not the time for them to endure the inhumane pain in lifeless hospitals. The palliative care volunteers are there to relieve the pain the kids are suffered both physically and mentally.

For children with cancer, volunteers try their best to help them make every day of their lives meaningful and enjoyable, and relieve as much of their pain during treatment.

Chemotherapy is a most common treatment for cancer patients. Even some adults cannot stand the devastating pain from the treatment, let alone children.

In Beijing, the palliative care volunteer group has a hospice and an activity center for the kids.

Various activities are held for children every week, including painting, chess and singing. There are also toys and books for them. The activity center is a 10-minute walk from the Beijing Children’s Hospital, so it is convenient for sick children and their parents to go there after visiting the hospital.

Volunteers at the activity center have multiple tasks, including game designing, playing games with the children, and consulting with the parents to alleviate their pain as well. As parents also suffered immense pressure when their children were diagnosed with terminal diseases, they are also the subject of palliative care.

The hospice was designed for kids whose expected remaining lifespan is less than six months. Located inside Songtang Hospital in Chaoyang district, Beijing, the hospice is decorated more like a bedroom at home than a hospital ward. With a king-sized bed and dozens of stuffed toys, children feel relaxed and calm.

“After the hospital saved my daughter, they suggested that we bring her to this hospice instead. Her symptoms became stable after we moved here,” said a mother of a girl with a severe illness. “Unlike a hospital, it feels more like a home, making us feel more comfortable and relaxed.”

Qiqi, the sick girl, was paralyzed and unable to speak, but after living for a couple of days in the hospice, she is now able to move her hands, blink and even respond to doctors. The hospice has done a better job at easing the pain of parents and children.

Another care center is expected to open. Though the number of volunteers surpasses 200, it is still far short of the demand.

Throughout the country, there are an estimated 4.5 million children in need of palliative care service, and most of them are dying from neurological disease and childhood birth defects. Given the fact that the public knows very little about the situation, there is still a long way to go. More people are called to actively participate in this meaningful campaign.

The author is a Palliative Care volunteer for children in Beijing. The views expressed do not necessarily reflect those of the People’s Daily.