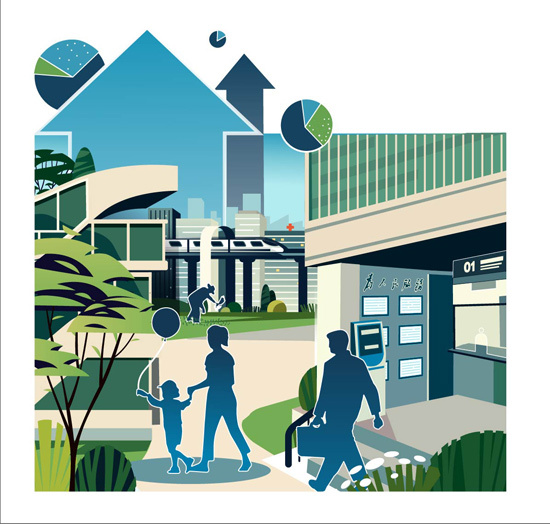 China's economic recovery from the COVID-19 shock has been swift but uneven. Credit-fueled infrastructure and real estate investment and a surging trade surplus were the main drivers, while private consumption has trailed, with household incomes and consumer spending recovering more slowly.

This pattern reflects China's policy response which largely focused on public investment, protecting companies and ensuring a swift reopening of factories. In contrast, direct support to household incomes was relatively limited, especially compared with other major economies where large-scale aid to households held up consumer demand. While the rapid normalization of China's supply capacity is an important achievement, there are risks associated with an imbalanced recovery path.

China's rising trade surplus risks aggravating international trade tensions, and serious doubts remain over the sustainability of a public investment driven growth model. As the focus of policymakers shifts from the immediate recovery to setting long-term strategic directions for the 14th Five-Year Plan (2021-25), addressing these imbalances is thus a key priority.

China's uneven COVID-19 recovery has accentuated challenges that have been known for some time. Debt-fueled investment－a key driver of growth in the past 10 years and during the recent recovery－is unlikely to sustain growth without exacerbating financial risks. In the light of geo-economic tensions and weak global demand, a return to export-led growth seems equally impossible.

If China cannot rely on external demand to utilize its full production potential, and if the domestic economy has in many areas reached the limits of productively absorbing additional investments, the solution to sustaining growth in the coming decade must be a greater reliance on domestic consumption. This may seem counterintuitive: economists have long associated economic growth with rising investment to expand the productive capacity of the economy.

But in a world of structurally deficient demand, China would gain little by just focusing on expanding supply. Instead, a combination of improved social welfare, investment in human capital, and decisive steps toward greening provides the best hope to stimulate innovation and productivity growth and propel China into a new phase of sustainable development.

First, China's policymakers should focus on bringing the national savings rate down. While China's high national savings rate enabled rapid investment during the early stage of development, it led to the accumulation of large external imbalances in the decade prior to the global financial crisis and soaring domestic debt and infrastructure investment thereafter. China's high domestic savings are partly a reflection of demographics and past high growth rates.

But they also reflect current economic policies. China's public spending is still biased toward investment in physical capital while there are gaps in social spending, which were revealed during the COVID-19 downturn. Without adequate social safety nets, households need to set money aside to provide for retirement and insure themselves against risks. In the 14th Five-Year Plan China should therefore aim to rebalance fiscal policies by curbing excessive public investment, which arguably yields increasingly lower returns, and redirecting more fiscal resources to social spending.

This includes a centrally financed social insurance system and increased transfers to enable poorer regions to upgrade health and education services and expand the coverage and generosity of social security benefits. Such policies would reduce the need for precautionary household savings among China's poorer population and induce higher spending on current consumption.

Second, for increased domestic consumption to stimulate innovation and job creation, China needs more competition. Otherwise, the risk is that rising domestic demand could push up profit margins of existing companies but fail to trigger a new round of private entrepreneurship.

Well-functioning product and factor markets－for capital, land and labor－would ensure resources move to these new sectors and enterprises, including in the services industry, rather than being bottled up in low productivity uses. This will require comprehensive institutional and policy changes that would facilitate firm restructuring and exit of less efficient companies while promoting the entry of new companies and easing the most binding regulatory and financial bottlenecks to allow successful companies to invest and expand.

Further opening up of China's domestic market would greatly support this process of restructuring, guarantee continued access to critical inputs, and ease tensions with major trading partners. Such reforms have been on the agenda for some time. To sustain economic growth throughout the 2020s, they have become imperative.

Finally, if there is an area where additional investment is warranted, it is in greening China's economy. The technological solutions already exist to allow China, and other middle-income countries, to decouple GDP growth from increasing emissions and resource use at much lower levels of per capita income than today's high-income countries managed in the past.

But market signals and incentives alone are not enough to encourage their rapid deployment. Government action is thus called for. A combination of appropriate tax and public investment policies could accelerate the shift toward a greener growth path during the 14th Five-Year Plan and unleash an additional round of innovation. President Xi Jinping's announcement to peak emissions before 2030 and achieve zero net emissions by 2060 are an important signal in this regard.

The need to rebalance China's growth model was clear before the COVID-19 pandemic. It has become more urgent since. The 14th Five-Year Plan offers a unique opportunity for bold action for the benefit of present and future generations. A Chinese economy that drives forward domestic reforms, further strengthens the dynamism of its internal market, and lowers remaining trade and investment barriers would not only achieve higher and more sustainable growth but be an engine for global prosperity as well.