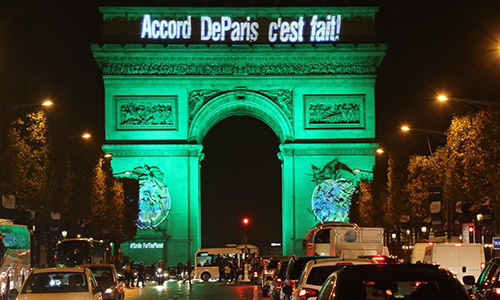 The Arc de Triomphe is lit in green in Paris, France on Nov. 4, 2016 to celebrate the entry into force of the Paris Agreement on climate change. (Photo: Xinhua)

The US officially withdrew from the Paris Agreement on Wednesday, finally fulfilling a promise President Donald Trump made more than three years ago.

On the same day, presidential contender Joe Biden committed to rejoining the global pact if elected. He tweeted late Wednesday, "Today, the Trump Administration officially left the Paris Climate Agreement. And in exactly 77 days, a Biden Administration will rejoin it."

It seems that joining or exiting international treaties is becoming a game of partisan politics for the US. Over the past four years, we have seen the Trump administration pull the US out of a series of international treaties, including the Trans-Pacific Partnership, the Paris Agreement, and Iran nuclear deal. If Biden takes over, many observers believe he will reassess and even rejoin them.

Trump and Biden hold different views over what role the US should play in the international system. Under his "America First" agenda, Trump withdrew the US from treaties and organizations that he thinks do not conform to US interests, regardless of the consequences. But Biden believes the US should play its role - a leading one for that matter - in the international system.

For the sake of tackling climate crises, the US, the world's second biggest emitter and No.1 historical emitter, no matter under whose leadership, is welcome to rejoin the Paris Agreement. But the uncomfortable thing is that the US has failed to maintain policy consistency and keep promises it has made to the international community due to domestic partisan politics. It's bringing its domestic political struggle to the international arena.

Amid growing political polarization, US partisan divides are clearer and starker now than they have ever been. Take climate change. Democrats, who are more convinced that the effects of pollution from human activities is the cause of climate change, and believe the Paris Agreement is an effective global pact to reduce emissions that the US shouldn't quit, while Republicans don't take climate change seriously and object to climate actions that could have an arguably negative economic impact.

According to InsideClimate News, a nonprofit news organization focusing on environmental journalism, more than 80 percent of industry campaign contributions went to Trump or other Republican candidates likely to block climate action during this election circle.

The two parties attack each other not necessarily because they think the other is wrong, but they just oppose for the sake of opposing. In areas where the two parties differ greatly, dramatic changes are easy to happen if there is a change in leadership. Lack of policy consistency and continuity is the inherent loophole of the US political system and partisan politics.

It is costing the US' reputation and undermining its international status. It leaves the world with the impression that international promises made by the US are unreliable. They may vary at any time with a leadership change. Even if the US returns to the Paris Agreement, it's unknown how long it will stay before it leaves again.