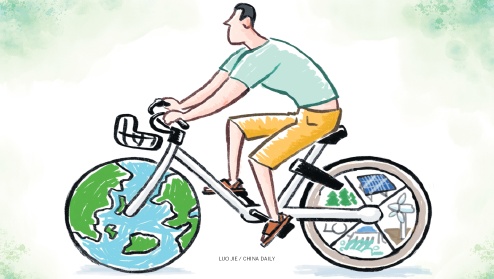 The documents released after the Fifth Plenum of the 19th Communist Party of China Central Committee have reiterated China's vow to further strengthen ecological civilization. Especially, the suggestions released on Tuesday said local governments should take effective measures to ensure carbon emissions in their areas peak before 2030.

Addressing the United Nations General Assembly on Sept 22, President Xi Jinping pledged that China will not only intensify its fight against climate change, but also peak its carbon emissions before 2030 and become carbon neutral by 2060, thus making a huge contribution toward meeting the Paris Agreement's goals.

Curbing emissions obligation of humankind as a whole

First, China has made the decision because fighting climate change is the common responsibility of humankind and, by doing so, it will promote sustainable development and help build a community with a shared future for mankind.

Unfortunately, the United States, which along with China played a key role in the adoption of the Paris climate pact, has withdrawn from the agreement so that it doesn't have to fulfil its global climate commitments despite being the second-largest emitter of greenhouse gases.

Second, China has fulfilled the 2020 climate targets it set in 2009. By 2018, China's carbon intensity (emissions per unit of GDP) had declined by 45.8 percent (more than the 40-45 percent target) from the 2005 level, while its forest stock volume reached 17 billion cubic meters (exceeding the 13.6 billion cubic meter target) and non-fossil energy in its total energy mix increased to 15.3 percent (surpassing the 15 percent target) this year.

China has both the political will and the capacity to achieve the 2030 and 2060 targets, because it is committed to building a low-carbon, safe and efficient energy system. During the 13th Five-year Plan (2016-20) period, China realized the "double control target", that is, controlling both the volume and intensity of total energy consumption. As such, by the end of this year, its energy consumption per unit of GDP will decline 15.0 percent from the 2015 level, though it will still be 1.9 times that of Japan, which means it still has room for improvement.

China has also met the obligatory target of lowering the total energy consumption volume below 5 billion tons of standard coal. Last year its coal consumption was 4.86 billion tons of standard coal, and its energy consumption per unit of GDP is expected to drop by more than 15 percent by 2025, and 50 percent by 2030 during the 14th and 15th Five-Year Plan (2021-25 and 2026-30) periods. Which means China's energy efficiency will reach the global advanced level (that is, Japan's level) by the time its emissions peak in 2030.

The effects of using renewable energy to reduce emissions have been remarkable. In 2019 the country's non-fossil energy generation capacity was 2.39 trillion kilowatt hours, which means reduction of carbon emissions by more than 2 billion tons compared with coal power. China is also accelerating the process of reducing coal consumption both in volume and as a percentage of total energy consumption. Despite being the world's largest coal producer (46.0 percent of the world's total) and consumer (23.6 percent globally), China is striving to reduce coal consumption to 2.60 billion tons and coal's share in its energy mix to 42.6 percent by 2030.

Moreover, China has established the world's largest carbon trading market, covering high-carbon-emitting industries such as electricity, steel, cement, chemical, electrolytic aluminum and papermaking. And although the market includes nearly 3,000 major emitters, the compliance rate is high and increasing by the year. As of October, the cumulative transaction in China's carbon trading market was 9.3 billion yuan ($1.39 billion).

Besides, between 2005 and 2018, China's forest cover and forest stock increased by 45.09 million hectares and 5.10 billion cubic meters, making China the fastest greening country. All this has made China a major seller in the carbon trading market. And during the 14th Five-Year Plan period, China has pledged to further reduce the emissions from carbon-intensive industries and large and medium-sized enterprises, so as to boost carbon trade.

Impact of emission-cut targets on the world

The Paris Agreement and other international environmental treaties are the legal basis for global environmental governance. China has been making valuable contributions to global emission reduction efforts by actively participating in global climate governance and implementing the Paris Agreement, not least because it has always upheld international treaties and opposed unilateralism and protectionism, which the US has now resorted to.

China has been contributing to the global fight against climate change, by realizing the goals and targets set by international organizations. It has been developing technologies to propel green energy generation and sharing them with the international community, and it will continue to promote technology cooperation with other countries so as to jointly lead green, circular and sustainable development. It is also willing to work with developed countries to fight and mitigate the impacts of climate change.

The author is a professor and the dean of the Institute for Contemporary China Studies at Tsinghua University. The views don't necessarily represent those of China Daily.