US Vice President Mike Pence on Thursday delivered a major policy speech on China. Initial impressions were that his take on China relied on clichés he used in last year's speech. 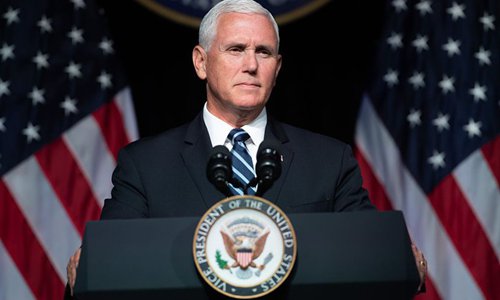 However, Pence did express a more positive attitude toward improving China-US relations. He emphasized the US does not want to "decouple" and repeated how US President Donald Trump is willing to start a new future with China.

Pence did not hesitate to praise the White House administration's China policy, emphasizing its effectiveness and wisdom, which once again touched on familiar rhetoric.

It was almost exactly this time last year when Pence delivered a speech while the US was preparing for the mid-term elections.

It's clear that Pence's speech was aimed at generating Republican votes for the 2020 US presidential election.

In his speech, Pence offered a positive attitude in reaching a trade deal with China and improving relations.

Pence said the US does not seek confrontation or to "decouple" from China. He also underlined the friendship between Chinese President Xi and his US counterpart Donald Trump.

The Vice President expressed the hope that the US-China relationship will bring more benefits to the two peoples and evolve for a brighter future.

Pence said the US would not allow challenges to impede China-US relations. He stressed that President Donald Trump is positive for reaching a trade deal between China and US. US would continue economic and cultural exchanges with China. He also said China and the US will cooperate on issues such as the Korean Peninsula denuclearization and Middle East.

Many experts on Sino-US studies believe Pence's latest speech is different from his last year's in many aspects.

Chinese scholar Li Haidong, who specializes in US studies, told the Global Times that despite how last year's rhetoric was considered a new "Cold War" declaration, this year's address is calmer and sounds more like a call for "re-engagement" with China.

Due to past diversity and the mutability of US statements on China, it remains unknown which path Washington will take on the China issue.

The growing tensions and the escalating trade war have undermined interests of the two countries. China won't be overwhelmed by US' hardline policies, which has been fully proved in the past one and a half years. US political elites should recognize the fact and make true efforts to promote China-US relations. As Pence has said in his speech that improving China-US relations requires more practical actions, then the US side should also learn something from his remarks.

Different civilizations should be able to co-exist harmoniously in the 21st century to make the world more diversified. This is a universal truth. It is hoped the US won't refuse to have a truly great try with China and other countries, to contribute American strength and wisdom for a peaceful 21st century.