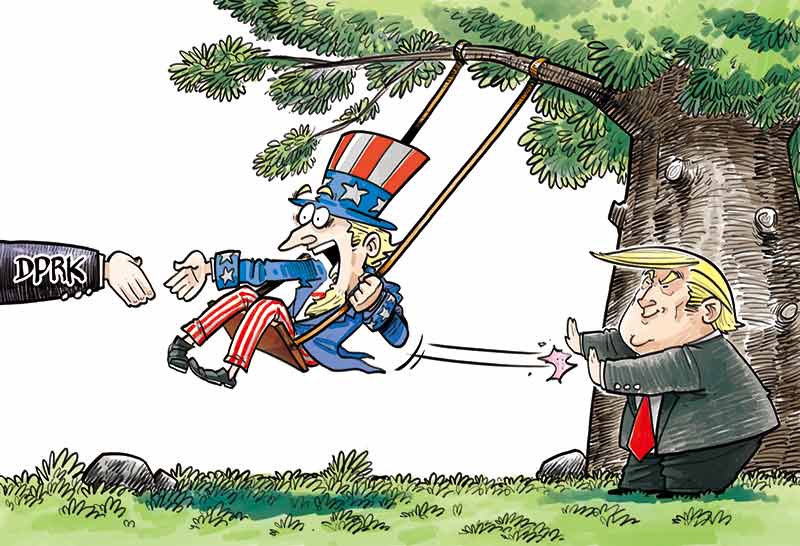 Editor's note: On May 24, US President Donald Trump called off the planned summit with Kim Jong-un, leader of the Democratic People's Republic of Korea, in Singapore on June 12. Yet the United States administration later said it still wants the summit to be held. Three experts share their views on the dramatic twist in the planned Kim-Trump meeting with China Daily's Pan Yixuan. Excerpts follow:

Peace process is slow but positive

Pyongyang and Washington stayed on track to hold the planned summit despite their differences on how the denuclearization of the Korean Peninsula should proceed. But Trump changed his stance on May 24 and cancelled the planned meeting.

The DPRK attaches perhaps the greatest importance to its security and regards its nuclear program as a guarantee for self-defense. In 2008, Pyongyang blew up the cooling tower of a nuclear plant in accordance with an agreement at the Six-Party Talks but resumed its nuclear program after pulling out of the agreement because of the US' rigid stance.

Even this time, Washington tried to put maximum pressure on Pyongyang, by not easing the sanctions and conducting the "Max Thunder" military drill with the Republic of Korea, which the DPRK condemned as a security threat.

But the dramatic development didn't come as a surprise, as Trump and Kim refused to budge from their respective rigid stance on the denuclearization process. Both have left the door open for a possible meeting, though, for the sake of the DPRK, the US and the world.

If the two sides indeed agree to hold the summit on June 12, it will be a big signal that the peace process is moving in the right direction.

Don't pin too much hope on summit

Fan Jishe, a senior fellow at the Chinese Academy of Social Sciences

The fact that Washington and Pyongyang failed to resolve their vital disagreements on the denuclearization process and the DPRK's security requirement created doubts whether the planned summit would be held. While Washington stuck to its "complete, verifiable, irreversible dismantlement" of Pyongyang's nuclear program, the DPRK insisted on its "phased denuclearization" plan. Due to this stalemate, adequate preparations could not be made for the planned summit, which in turn undermined the meeting's practical effects on the denuclearization process.

Trump has brought the so-called pragmatic style of a businessman to his presidency. He seems determined to continue using his cohesive and confrontational tactics based on the "America First" policy to fulfill his promise of "make America great again" even if they threaten regional and global peace and stability. And in his wishful thinking, he thought his tough stance, including the insistence on onetime complete denuclearization, would force the DPRK to agree to his terms relatively quickly.

But he should have realized that the two countries have vital and complicated disagreements over denuclearization for three decades.

If Washington and Pyongyang can still hold talks on the denuclearization issue, it would be regarded as a remarkable achievement.

Since Trump called off the Washington-Pyongyang summit even after the latter released three American hostages, stopped its nuclear and missile tests, and blew up the Punggye-ri nuclear test site, the international community expected the DPRK to give a fitting and strong response to the US. But the DPRK chose to not do so. Instead, it said it is still willing to hold a summit "at any time, in any form".

Trump said Pyongyang's actions were not convincing enough for him to lift the sanctions against the DPRK and make enough efforts to guarantee its security. In fact, the US said it would lift the sanctions and take measures to minimize the threat to the DPRK only after Pyongyang completely abandons its nuclear program and weapons. By calling off the planned summit, which was full of uncertainties to begin with, the US is trying to pressure the DPRK to agree to its terms.

Besides, if Pyongyang resumes its nuclear or missile tests, or takes any measure that Washington sees as a threat, the US administration will use it as an excuse to strengthen its "maximum pressure" policy, even use military force to denuclearize the peninsula.

But Pyongyang appears committed to promoting the peninsula peace process. At the Third Plenary Session of the Seventh Central Committee of the Workers' Party of Korea in April, Kim said the DPRK would shift its focus to economic development.

If Pyongyang maintains this attitude, the US will have no justification for intensifying its military activities on the Korean Peninsula or in its neighborhood.

That's why the two sides are now more likely to start a new round of diplomatic and political game - of trying to force their respective requirements on the other. So it will take a long time and the joint efforts of all countries to actually denuclearize the peninsula.