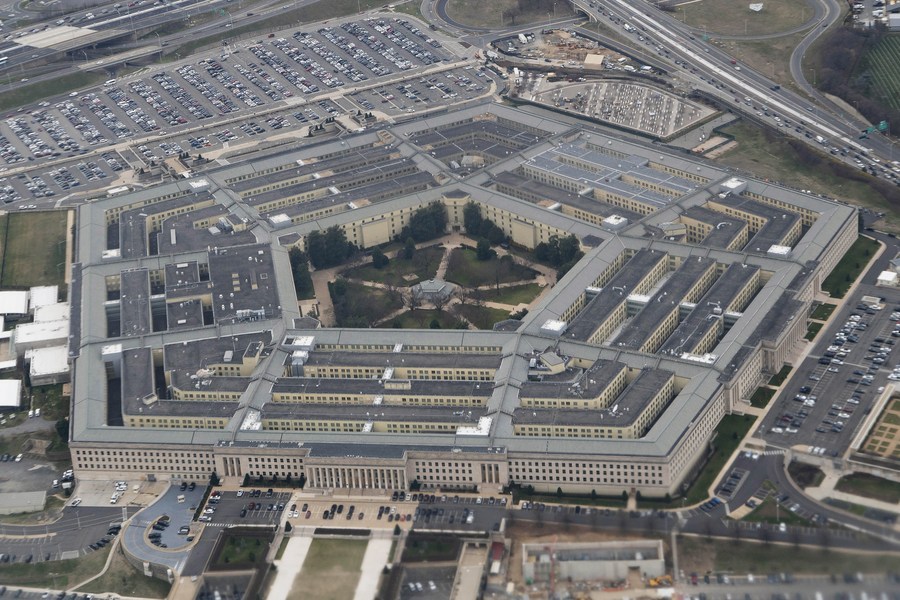 Photo taken on Feb 19, 2020 shows the Pentagon seen from an airplane over Washington, DC, the United States. [Photo/Xinhua]

US Defense Secretary Mike Esper, naturally, defended it, saying "it will achieve the core principles of enhancing US, strengthening NATO ... reassuring allies and improving US strategic flexibility".

It remains an open question whether it will end up consolidating or weakening the NATO alliance, but Washington's plan to withdraw troops from Germany will almost certainly unsettle its European allies, and add to the diplomatic mess that the US administration has been creating.

The only "upside" to this costly plan is that it is conducive, theoretically, to US strategic flexibility, especially in relation to the administration's new emphasis on what it insists on calling the Indo-Pacific.

The White House's own defense of the decision sounds counter-intuitive, porous and self-defeating.

The core reason the White House has given is that Germany has been taking advantage of the US, economically and militarily, by not spending enough on its own defense.

Germany hasn't met the NATO target of spending 2 percent of its GDP on defense, putting in only 1.38 percent, according to the White House.

So of course the withdrawn troops will be relocated to nations that spend more on defense.

In fact, not. Italy and Belgium, which are expected to host the troops, respectively spend 1.22 percent and 0.93 percent of their GDP on defense, and are among the NATO members contributing the least. But that doesn't matter. Washington wants it that way, just like in countless other cases. Even if the decision risks alienating a close ally, even if it means billions of dollars of extra cost to be paid to little avail.

The German government's willingness to engage Russia notwithstanding, its failure to fully comply with the White House's demands may be a stronger driver behind Washington's reckless move.

No matter how badly establishment strategists wish their country could retain traditional alliances, the White House is obviously keen to show that it is putting "America first" over the interests of its allies.

But whatever the pros and cons of the decision in military terms, the perception is that it is a petty move to punish the Angela Merkel government for its criticism of many of the US administration's policies.

This vindictive willfulness has become a hallmark of the current US administration and one of the key tasks for the administration that follows will be restoring confidence among its allies that the US will be a trustworthy partner.

Rebuilding the kind of strategic alliances the US once prided itself on could prove a daunting challenge for whoever enters the White House next given the current administration's distain for working in concert with others.