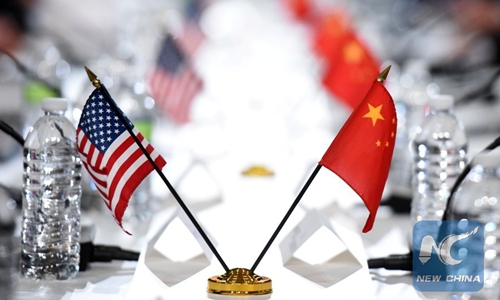 File photo taken on November 23, 2016 shows the national flags of the United States and China during the 27th Session of the China-US Joint Commission on Commerce and Trade in Washington DC, US. (Photo: Xinhua)

The phase one trade deal between China and the US was inked in Washington DC last month. The agreement focuses on protection of intellectual property rights, technology transfer, food and agricultural products, financial services, exchange rates and transparency, expanding trade, bilateral evaluation and dispute resolution.

The above-mentioned core content of the phase one deal has been heatedly debated lately. Generally speaking, the signing of the agreement will help accelerate China's reform and opening-up.

For instance, strengthening the protection of intellectual property rights will ensure the continuance of research and development, which in turn will stimulate the enthusiasm of innovation among Chinese companies. Strengthening the protection of patents, trademarks and trade secrets can better safeguard the legal rights and interests of all enterprises in the Chinese market.

Ensuring that the transfer of technology occurs on voluntary, market-based terms can help guarantee both Chinese and American companies can openly and freely enter one another's market in accordance with market principles. This is conducive to promoting fair competition between the two sides while promoting high-quality development of the Chinese economy.

Some observers have been interpreting the deal as one in which China is trying to win more time for a so-called truce and for its self-development by pledging to purchase more from the US. In fact, take agricultural products for example, China is facing a shortage of cultivated land, so increasing imports of agricultural products from the US will help meet China's growing consumer demand.

The phase one deal has prevented further rises in tariff rates and trade policy uncertainty between the two sides, signaling that trade friction between Beijing and Washington has reached a turning point. As the world's two largest economies, China and the US are deeply interconnected economically through the industrial chain.

Only dialogue, cooperation and negotiation are effective channels to resolve their economic and trade differences. Slapping more tariffs or decoupling the bilateral economic relationship would be detrimental to both countries.

Since China and the US established diplomatic relations in 1979, economic and trade cooperation has played a role of a ballast stone and propeller of the overall bilateral relationship.

The signing of the phase one agreement will hence play a positive role in stabilizing market expectations and maintaining China-US relations.

The possibility that China and the US could withdraw from the deal cannot be excluded. To ensure prompt and effective implementation of the agreement, China and the US have established a bilateral evaluation and dispute resolution arrangement.

For the moment, there is no third party to make a ruling in any dispute settlement. Their current mechanism for resolution of divergences is realistic and balanced, yet it is also vulnerable.

If the two parties fail to reach an agreement in future, one party might increase sanctions on the other, which in turn could see such a move as malicious and thus implement countermeasures, putting the phase one deal in jeopardy of collapsing.

Moreover, future negotiations between China and the US will touch on some fundamental and systematic issues, including subsidies and industrial policies, data flow, State-owned enterprises and human rights issues.

At present, the US and other Western countries are paying close attention to China's human rights situation while pointing accusing fingers at it on multiple fronts. It cannot be ruled out that the US may hype up the issue in future, which will affect the process of bilateral trade negotiations.

For China, the best way to cope with it is to separate economic and trade issues from other matters and to resolve the challenges one at a time.