OPINIONS Phase one deal should be cherished

Phase one deal should be cherished 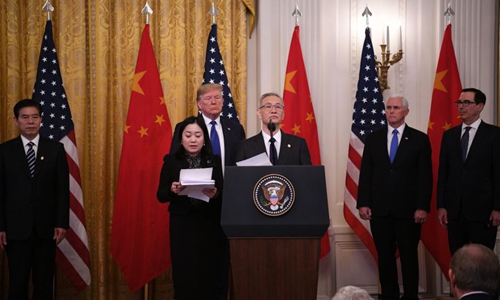 China and the US eventually signed the phase one trade agreement. The hard-fought agreement should be cherished by both sides.

The agreement was achieved after 22 months of the US-launched trade war against China. Although both countries have suffered some losses, their economies are running smoothly, showing strong tolerance for trade wars. In other words, if the trade war continues for another 22 months, China and the US will probably be able to withstand it. Thus, the agreement will never be a zero-sum game. It is destined to be the result of mutual compromise.

This full-fledged trade war waged by the US had at times made the two sides "see red." But it was stopped by the phase one agreement before causing any deadly consequences for either side. This shows that both China and the US are clear-minded. Both sides believe that continuing the trade war for a longer time is counterproductive to achieving their own strategic goals and exacerbates the loss and creates more serious risks.

The 22-month trade war was interspersed with negotiations. China and the US better understood each other's capability, will and bottom line. This is likely to help China and the US suppress their potential impulses when dealing with conflicts in the future. If both sides will be able to learn from the experience of the past 22 months when they want to raise the stakes in any disagreement, then this trade war will not be completely futile.

Both sides definitely have some regrets about the phase one agreement and are not so satisfied. This is precisely the type of response to a relatively fair agreement. Debating about who had lost or gained is shallow. Such debates are often exaggerated for certain political goals.

The agreement further linked the two economies, which is the opposite of the overall trend in China-US relations since the trade war. This creates a strategic paradox that the trade confrontation actually brought the two countries even closer.

It is such a paradox that makes many people worry: Can a preliminary trade agreement, reached during a period when China-US strategic relations are clearly declining, really work? How long can it last? Will it be replaced by new conflicts or further progress as negotiations continue?

The future is unpredictable, but it is clear that the Chinese and the US markets, and the global market all welcome the phase one trade agreement. This is more real than political voices and public opinion, because real trade speaks for itself.

Huge uncertainty remains. It may be more difficult for China and the US to reach a comprehensive trade deal, but we hope the preliminary agreement will enlighten both sides' further efforts. There have been twists and turns in the past 22 months, but neither side has given up contacts and negotiations and the desire to reach a consensus. This is one of the most profound experiences.

We urge individuals and forces to exercise some restrain in their nitpicking of the agreement and bad-mouthing future trade negotiations. Those who are preaching for confrontation should also exercise restraint. It is not empty talk that peace between China and the US benefit both, while fighting will hurt both. To verify it with greater loss is a waste. Continuing to push for such a waste is immoral.

We hope the implementation of the phase one agreement will be smooth as it can stimulate the two countries' further trade consultations and help ease overall China-US relations. History moves forward and it is good to help achieve progress.