OPINIONS PLA Daily: It's the time for Japan to change its security concept

PLA Daily: It's the time for Japan to change its security concept

The Japanese government released Defense of Japan 2018 (Annual White Paper) on August 28. It says that the Democratic People's Republic of Korea (DPRK) poses “an unprecedentedly serious and imminent threat to Japan's security”, and continues to play up the clichés of "China Threat Theory". 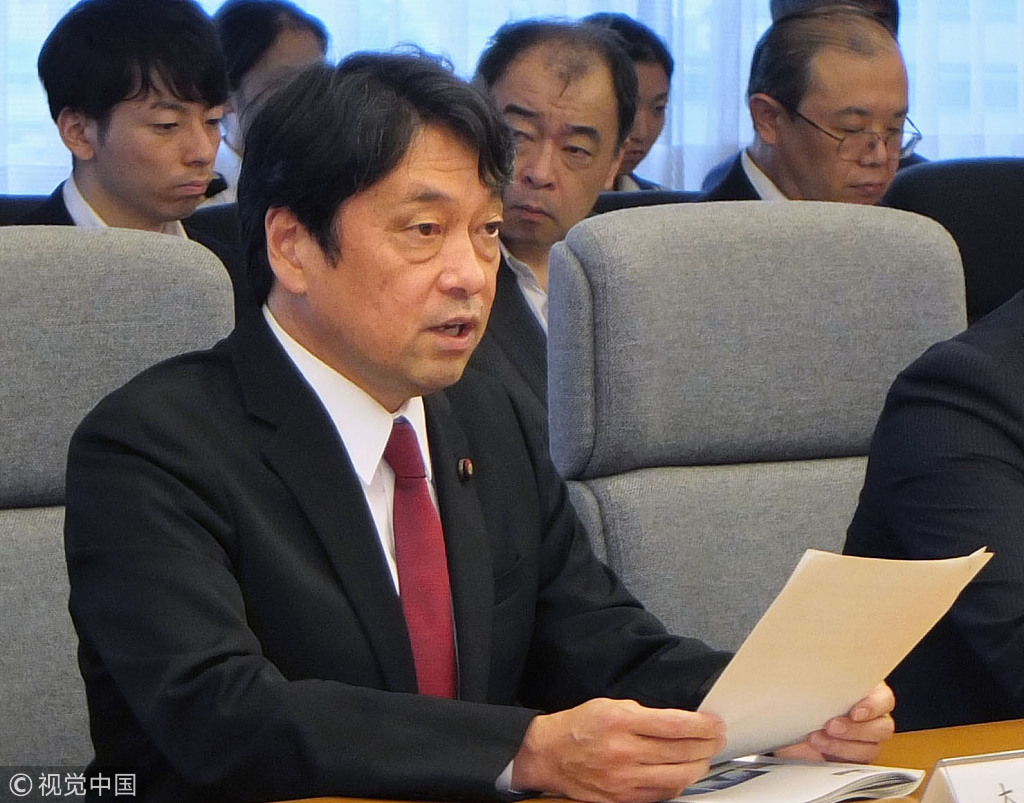 Japanese Defense Minister Itsunori Onodera speaks at a ministry meeting in Tokyo on Aug. 31, 2017. The ministry requested a record-high budget of 5.26 trillion yen ($47.8 billion) for fiscal 2018 as it seeks to counter missile threats from North Korea and defend remote islands in southwestern Japan in light of China's rising maritime assertiveness. (File photo: VCG)

The white paper describes the security environment around Japan as extremely severe. It seems to reveal Japan's "strong anxiety" about its own security. However, is it telling the truth?

Despite the recent thaw in the Korean Peninsula shows positive development in a general direction, Japan continues its cooperation with the United States to exert pressure on the DPRK and to provide training bases for the US special operations forces against the DPRK.

While China is striving to maintain regional security, Japan has further strengthened its defense force. Japan's defense budget applied for FY 2019 exceeds 5.2 trillion yen (100 yen is about 5.9 yuan). Once this budget is confirmed, it will become the "seventh consecutive rise" since Prime Minister Shinzo Abe took office in 2012, hitting a new high.

The Abe government’s attempt to resume military expansion and amend the constitution has caused strong sentiment among the Japanese. Earlier this month, 143 Japanese citizens sued the government over its new security law that allows Japan to exercise its rights to collective self-defense and increases Japan's risks of being involved in wars or terrorist attacks.

So, who should be “worried”? Anyone with a discerning eye will easily spot it. The Japanese government has always been talking about "peripheral threats" and hyping up a sense of crisis, which is completely deviated from the real security situation and rational security policy. Its motive is to find an excuse and pave its way to amend its constitution and resume military expansion.

The root cause of Japan’s paranoid suspicion towards its neighbors lies in its security concept.

The way to get along with neighboring countries is to cultivate friendship and improve cooperation. The right approach for Japan to seek for its surrounding security should start with the right mind-set, understand their own history, recognize its neighboring countries’ development, and grasp the emergent trends in our rapid changing times.

It’s the time for Japan to change its distorted security concept.

The author is Xin Jianqiang. The article was published on the PLA Daily on August 31. It is translated from Chinese into English and edited by the China Military online.