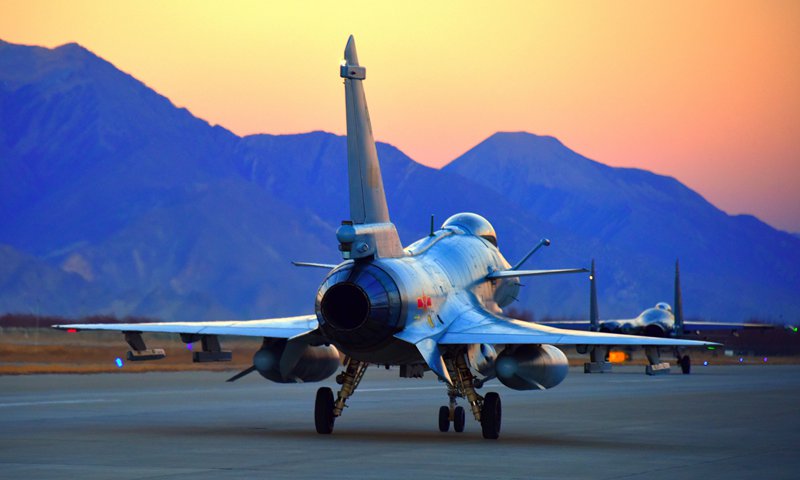 A J-10 and a J-11 fighter jets attached to an aviation brigade of the air force under the PLA Western Theater Command taxi on the flightline before takeoff for a combat sortie during a flight training exercise on January 4, 2018. Photo:eng.chinamil.com.cn

The People's Liberation Army (PLA) has been fully executing military training instructions issued by President Xi Jinping on January 3 by conducting drills at home and abroad involving its ground forces, navy, air force, rocket force and armed police, as the PLA's news media cautioned the troops on Thursday of imminent threats and to avoid complacency.According to the PLA Daily, China's most advanced military aircraft including the J-20 stealth fighter jet, the Y-20 transport aircraft, the H-6k bomber, and the J-16, J-11B J-10C fighter jets have all conducted training exercises since the beginning of 2018.The J-20 is conducting air combat training with other fighter planes including the J-16. The J-20 is also practicing beyond-visual-range air combat, and other aircraft, including the Y-20 and the J-10C, are training at unspecified airports on a "plateau region" in order to improve their capability in long-range military transport and air combat, the PLA Daily reported.Potential military conflicts in plateau regions have been on the rise since the border friction with India last year, so increasing military training in the plateau region is highly necessary, a retired PLA officer who used to serve in the air force and asked not to be named, told the Global Times."India's ground force has some advantages in quantity in the border areas, so if conflict happens, China's air force needs to seize domination of the skies and immediately create an overwhelming advantage for China," said the officer.Modern Navy, a WeChat public account run by the PLA Navy, reported on Wednesday that the PLA Marine Corps stationed in China's first overseas logistic base in Djibouti conducted a series of combat training missions including "countering reconnaissance from hostile aircraft, encountering combat in a desert, and tracking and annihilating terrorists."Xi, who is also general secretary of the Communist Party of China (CPC) Central Committee and Chairman of the Central Military Commission (CMC), issued military training instructions to Chinese military forces during an inspection of a division of the People's Liberation Army (PLA) ground force in the Central Theater Command on January 3.Xi ordered the creation of an elite combat force through real combat training, digitization, innovation and reform.Apart from the air force and overseas marine troops, other units including the navy, the rocket force, ground force, the armed police and strategic support forces across the country are all conducting or have conducted real combat training missions in January, the Xinhua News Agency reported.Increasing possibility of warA commentary in the PLA Daily titled "A soldier without desire for war-preparedness is not a good soldier" was published Tuesday. The article criticizes military personnel in the PLA who refuse to face the possibility of war and have been paralyzed by peace."When the country is on the brink of becoming a great military power, it's also stepping into a period with high risks to national security. War is not far from us. Regional situations around China are complex and unstable, and dangers are hiding under the peace. China cannot afford a military failure, so we must be fully aware of potential crisis and be prepared for battle at all times," the article stated.Experts say the possibility of military conflict around China has increased in recent years. "In regions like the Korea Peninsula, China-India border area and the Taiwan Straits, the PLA needs to be prepared for all possibilities. Our overseas interests in regions like Africa and the Middle East are also under threat due to local instability," said Xu Guangyu, a retired major general and senior adviser of the China Arms Control and Disarmament Association.