A key Party meeting concluded in Beijing on Thursday, reaffirming the significance and advantages of pursuing socialism with Chinese characteristics and modernizing the country's system and capacity for governance in realizing national rejuvenation, setting the tone for the country's future development path. 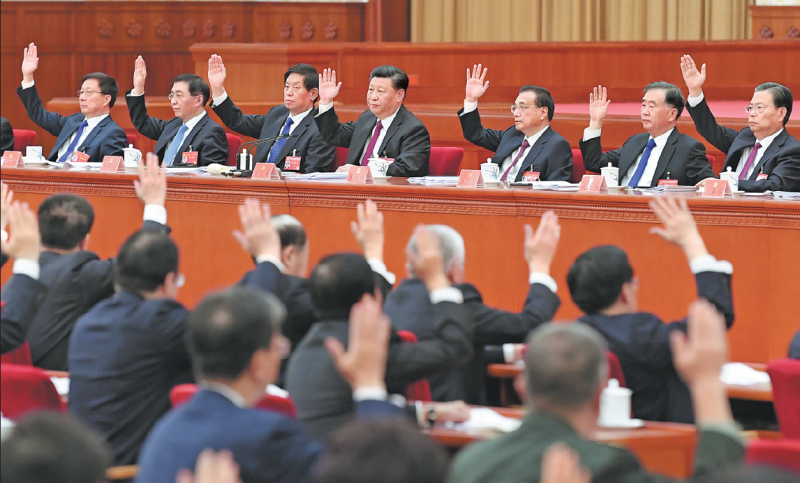 Xi Jinping, general secretary of the Communist Party of China Central Committee, and other leaders attend the Fourth Plenary Session of the 19th Central Committee of the CPC, which concluded in Beijing on Thursday. (Photo: Xinhua)

They also reviewed and adopted the CPC Central Committee's decisions, contained in a draft document, on some major issues on upholding and improving the system of socialism with Chinese characteristics and advancing the modernization of China's system and capacity for governance.

A communique released after the session said the members fully recognized the work of the Political Bureau in the past year and agreed that, facing the rise of risks and challenges from both home and abroad, the Political Bureau has united and led the Party and the nation to work hard and achieve success in deepening institutional reform.

Socialism with Chinese characteristics is a scientific social system that was formulated through long-term practices of the Party and people, and the work of governance was carried out in line with the socialist system, it said.

Since its beginning, the CPC has united and led the people to achieve revolutionary success, establish and improve socialism, formulate and develop policies in all areas, improve the country's governance system and produce historic achievements, the communique said.

After the Party's 18th National Congress in 2012, the CPC has united and led the nation to promote the improvement of socialism with Chinese characteristics and increase in the country's system and capacity for governance, it said.

The communique said socialism with Chinese characteristics and the country's governance system is guided by Marxism, rooted in China with the background of Chinese culture and welcomed by the Chinese people.

The governance system has promoted development of a nation with 1.4 billion people as well as national rejuvenation, it said.

The communique said advantages of China's governance system include upholding the centralized and unified leadership of the Party, following the Party's scientific theory, maintaining political stability and ensuring the country develops on the path of socialism.

These are the sources of the Party's firm confidence in the path, theory, system and culture of socialism with Chinese characteristics, it said.

The session highlighted the importance of following the guidance of Marxism-Leninism, Mao Zedong Thought, Deng Xiaoping Theory, The Thought of Three Represents, the Scientific Outlook on Development and Xi Jinping Thought on Socialism with Chinese Characteristics for a New Era.

The Party exercises overall leadership over all areas of endeavor in every part of the country, it said. The Party will improve all policies to firmly maintain the CPC Central Committee's authority and its centralized and unified leadership.