An Australian national science agency is reportedly set to break up its partnership with a Chinese top marine science institute following a baseless warning from Australia's security intelligence agency. 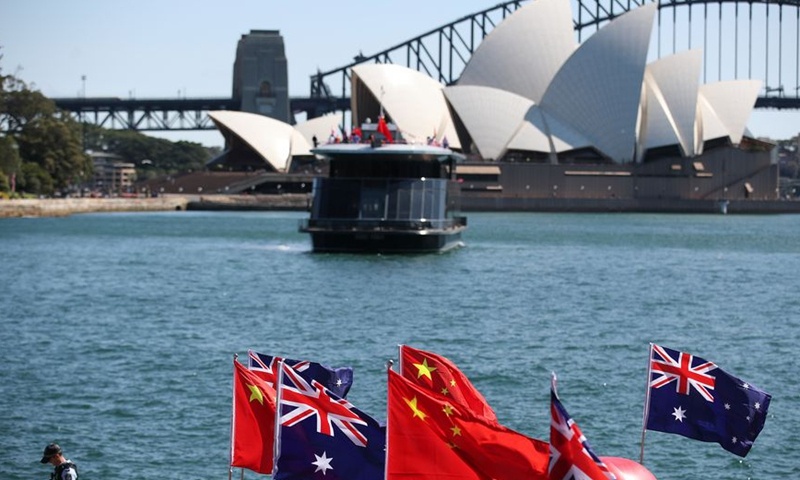 Photo taken on Sep 8, 2019 shows the Chinese and Australian national flags on a celebration event in Sydney, Australia.Photo:Xinhua

The Commonwealth Scientific and Industrial Research Organisation (CSIRO) will terminate an oceans research collaboration with Qingdao National Laboratory for Marine Science and Technology (QNLM) from June 2022, according to The Australian. Previously, the Australian Security Intelligence Organisation(ASIO) made a groundless accusation against QNLM, saying "it could help the Chinese navy to hunt down Australian submarines."

If The Australian's report is confirmed to be ture, it would be the latest example of the Australian's reckless interference with normal scientific and technological cooperation under the guise of national security.

Marine research cooperation is not the only field being affected, projects in agriculture, environmental protection and other fields are also threatened by Canberra's political boycott campaign. The Australian federal government in last December was reportedly considering tearing up a research agreement between the Victorian government and China's Jiangsu Province.

Australia's decision to meddle scientific cooperation is not an isolated policy decision, but rather to cater for the US' decoupling from China in economy and technology. This is Morrison's response to US' anti-China policy and another manifestation of its loyalty to the US.

However, politicizing scientific and technological cooperation will seriously hinder the progress when it comes to advancing the human race. The US' blockade of China in space technology is an example, which is proved failing to contain China's progress, but instead drag down the US progress.

China and Australia have carried out extensive cooperation in marine science, agricultural science, Antarctic protection and atmospheric change, and have made many achievements. Political boycott campaign undermines Australia's technological development. Compared with China, Australia's technology is not advanced, and this latest action will only set Australia back.

To sabotage scientific co-operation is also bound to potentially hurt Australia's economic interests. In technical cooperation with the US, Australia often provides funds, but patents and intellectual property rights are taken by Americans, while in cooperation with China, Australia can jointly share the technology outcomes.

Australian Prime Minister Scott Morrison said at a press conference on Saturday at the Group of Seven leaders that his government wants to restart dialog with China, but if Canberra has any sincerity to stop the escalating relationship with China from spiraling down, it should first change the practice of politicizing economic and trade issues and scientific and technological cooperation.

If the Morrison government is serious about repairing relations with China, it should take concrete action as soon as possible, and in particular should put an end to the damage Australia is inflicting on economic and trade ties and focus on promoting to scientific and technological academic cooperation and normal people-to-people exchanges, so as to avoid further irreparable losses.

The author is chief research fellow at the research center for Pacific island countries of Liaocheng University in East China's Shandong Province.