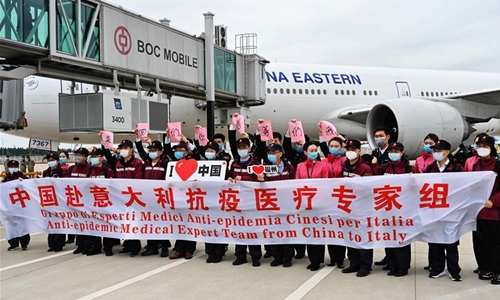 The Chinese government has offered over 80 countries and international organizations emergency assistance to fight the coronavirus pandemic, sent seven teams of medical experts to five badly-hit countries including Iran and Italy, and held dozens of video conferences with various countries to share experiences as of Thursday.

On the one hand, China has always born in mind the timely help it received from the international community at its most difficult times. China's foreign assistance demonstrates the country's willingness to give the goodwill back. On the other, as the virus has a foothold across the entire globe, China is well aware that all countries must tide over the difficulties together and is ready to contribute to the global fight against the virus. In particular, as a global manufacturing power, China has started to play its vital role, stepping up production of much-needed medical supplies.

Any country with international morality and responsibility would make the same choice if it were in China's position. However, China's foreign assistance has again touched a raw nerve of some people. Some in the West are once again politicizing the assistance China provided, making it another weapon to slander China.

They claim that China's acts are with murky motives and geopolitical intent. The efforts of the Chinese government to help others are seen by them as an attempt to vie for global influence and cozy up to recipients, drawing them over to China's camp. Some even claim that China should be held accountable for the global pandemic and ask China to compensate. Thus China's assistance is only a gesture of atonement and should be taken for granted.

Such remarks are utter nonsense. It seems that some people will never drop their extremely biased concept toward China. No matter what China does, they always find fault and seize on pretexts to attack China. Believe it or not, if China offered little assistance to epidemic-hit countries, they would seek more excuses to throw mud at China.

Such nonsense also stems from these people's deep sense of anxiety. Through the virus battle, the superiority of China's domestic governance has been fully displayed, and through China's timely assistance to others, the country's international influence has been greatly enhanced. In sharp contrast, with some Western countries becoming the new epicenter of the pandemic, certain underlying problems of their governance systems have been exposed, and inter-country relations within the Western camp have also experienced turbulence. Thus, some in the West are impatient to seek some targets to discredit China and shift people's attention, so as to cover up their own failure.

It appears that slandering China has already become the West's customary tactic. At this critical time, they really should focus more on curbing the virus and protecting their own people's lives. Actions will certainly speak louder than rhetoric.

And for the well-being of all people, China is willing to offer help if any country is in need, but for those who keep smearing China's foreign assistance, they had better not use any China-provided supplies.