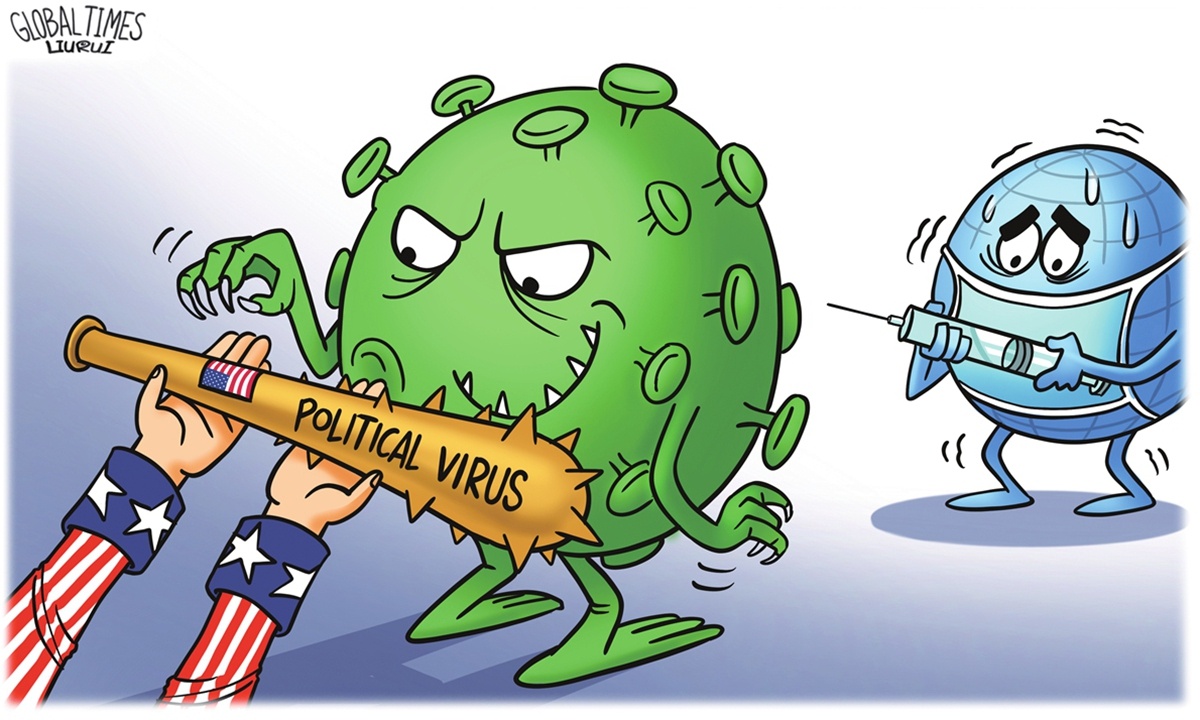 August 25 will be the 90th day since US President Joe Biden ordered US intelligence in May to investigate the origins of the novel coronavirus, including the "lab leak" theory that the US administration has been using to smear and attack China. It is clear that the US has once again decided to play politics. In fact, besides China, countries like Russia have also long been the victims of US politicization. Alexey Mukhin (Mukhin), General Director of the Centre for Political Information, a Moscow-based political analysis and consulting company, shared his thoughts with Global Times (GT) reporter Xia Wenxin on politicization, US bio-labs around the world, and other issues.

GT: Recently, Washington has launched a series of attacks against Beijing over the origins tracing of the novel coronavirus, including the politicization of the issue. Why does the US keep politicizing the origins tracing? What is the real purpose of the US government?

Mukhin: The US' real purpose is to "soften the positions" of the Chinese government on many issues that have nothing to do with the "COVID-19 crisis." Above all, we are talking about an attempt to underplay the role China plays in the global economy and put it in a subordinate position to the US.

The politicization of the issue of virus origins tracing is associated with a political inferiority complex the US has experienced since February 2007 when Russian President Vladimir Putin delivered the Munich speech. After that, Russia, which had never admitted its defeat in the Cold War since the Soviet times, entered a new information confrontation with the "collective West."

Despite the sanctions and the demotivating influence of Western countries on the representatives of its establishment, so far, Russia has won one victory after another: It has regained Crimea, and is successfully completing its military operations in Syria while strengthening military cooperation with countries in the post-Soviet space and so on.

It is crucially important for the US to secure at least one victory, even a symbolic one. Otherwise, its rapidly declining credibility cannot be restored either in the eyes of its opponents (for example, Russia and Iran) or in the eyes of its allies and NATO partners.

GT: The US has established over 200 biological military laboratories around the world. For instance, it has built several laboratories in Ukraine, Georgia, and other former Soviet countries that are around Russia. What does the US really want by doing so? How should the international community ensure their security?

Mukhin: In this case, we are talking about the biological warfare the US is able to start because US bio-labs have such a function. And the US doesn't restrict the development of biological weapons in any way. Even though it has already signed the Biological Weapons Convention in 1972, the US has ratified the Convention partially, with reservations, and is not implementing it properly.

The global community must urgently create basic documents that bind on everyone to prohibit the development of these types of weapons. If the US does not comply with this protocol, it should be sanctioned in the harshest way, to the extent of international isolation and physical destruction of the biological military laboratories while the security in the countries where these labs are located can be ensured.

The US should be punished for developing such weapons in an international tribunal.

GT: In one of your recent interviews, you said that "the current pandemic situation is certainly a prologue to biological warfare," and "biological warfare is the result of the malicious policies of the US and its NATO partners." What led you to such statements? Is there any evidence to prove that the West has started biological warfare?

Mukhin: There is ample evidence showing that the US and the UK are collecting biological data of people in various countries. The very existence of closed bio-labs and the emerging outbreaks of rare diseases in the areas where these labs are located speak for themselves.

Inspection of fixed and mobile laboratories set up by the US and its NATO partners or allies is urgently needed. This type of work must be put under strict international control. However, it should be borne in mind that structures such as the Organization for the Prohibition of Chemical Weapons are already under the control of NATO countries. Therefore, new structures that represent a broader international community should be created.

Based on what the US and the UK have done, the start of the biological warfare that I have mentioned above has become evident with the global spread of the novel coronavirus.

Mukhin: Politicization of issues is a weak move. It is carried out without an evidence-based position on a particular issue. Politicization is made possible by the dominance of the so-called Western media, which are directly controlled by the governments of the US and other NATO countries. It is also made possible by politicians and officials in the EU and other state entities in Asia, Africa, and Latin America that are corrupted by the US and UK. We can see the sign of such corruption clearly in actions and statements of these officials that go against the national interests of their countries but are in line with the interests of the US.

By working together, Russia and China have a unique opportunity to create a counterweight to the activity of the US and its allies after restoring, in fact, a bipolar system that existed during the Soviet era and served to maintain a balance in international relations.

The lack of this balance and the existence of abuses committed by the US and its allies have clearly shown that the US couldn't cope with the role of the world regulator (or hegemon). However, it does not want to give up the privileges provided by such a status. As the situation develops, the US' malice may lead it to the edge of rash and tragic decisions, considering that the country has already used nuclear weapons in Hiroshima and Nagasaki (in other words, the US knows the taste of deploying nuclear weapons). This is why it is necessary to bring the US and its allies mildly but persistently back into the international legal framework. And this can be done through the joint efforts of China and Russia.