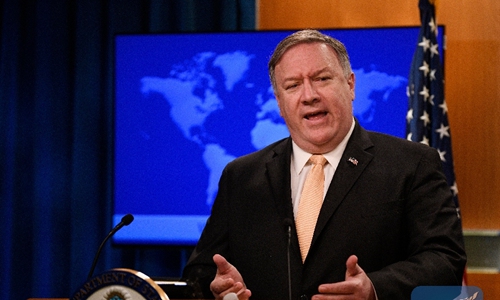 US Secretary of State Mike Pompeo in recent days has launched a string of violent attacks on China. He accused China of causing enormous losses to the US and the world by "not sharing the information they had" again in an interview with Fox News on April 23, saying the Chinese government will "pay a price for what they did." One day earlier, he blasted China for taking advantage of a pandemic to "bully" neighbors and called on other nations to hold China to account.

Pompeo targeted the Communist Party of China (CPC) in his remarks. He is the senior US official who's the most active in attacking the CPC, which reflects extreme hostility against socialist China and reveals his malicious goal to push the US and China into the strategic rivalry.

The White House and the Republican Party have formulated a strategy to win the November presidential election by shifting the blame to China to divert domestic US attention. Pompeo is adding fuel to the blame game by attacking the ruling party of China.

The former top intelligence official is steering the US Department of State into becoming the Central Intelligence Agency. He is playing with fire, making the 21st century an era of major power confrontation and undermining the foundations for peace. Despite being the chief diplomat of the US, he totally betrayed the basic responsibility with which he is entrusted to promote international understanding. He has become the enemy of world peace.

The US, as the world's superpower, has special responsibility for world peace. It's a pity that at a time when the world is facing turbulence and great uncertainties from the novel coronavirus, the position of secretary of state has been occupied by a person of a sinister nature. Pompeo is poisoning US diplomacy with his personal hatred of the Chinese political system, which will worsen the global situation.

Geopolitics cannot dominate the world anymore. Pompeo and his like are desperately pulling the world backward. They are unable to handle a diverse and complicated new century and so they attempt to resume the Cold War. They can only "realize their ambition" in polarized confrontation.

We want to tell Pompeo that any attempt to drive a wedge between the CPC and the Chinese people is delusional. It's foolish for him to do so at this time. Under the leadership of the CPC, China quickly controlled the epidemic after the outbreak, while the Chinese people witnessed the US medical system collapsed with a climbing death toll that meant a much higher cost in lives than China. Chinese society and politics come in an era full of unprecedented confidence and the Washington elites have completely failed at their attempts to fool the Chinese.

Most of the public around the world are very aware of the political tricks of politicians like Pompeo. How many people in the world experiencing waves of outbreaks can believe that worsening outbreaks around them are not because of domestic reasons but entirely from China? Some Western politicians and media who follow Washington's appeal to hype China-bashing are primarily profit-driven, and how many of them can truly believe their own hyperbole?

Lies may fulfill Pompeo's personal ambition, but they will never accomplish the US dreams to be "great again." Pompeo is not only a figure harmful to world peace, but also should be listed as the worst US secretary of state in its history.