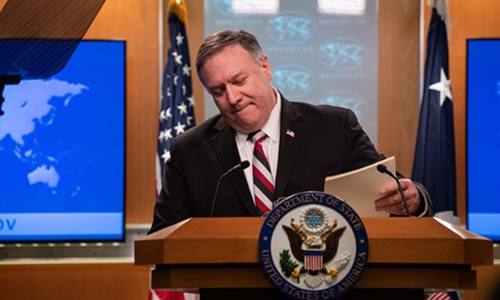 US Secretary of State Mike Pompeo has taken another bite at China. On Sunday, the uninhibited official said he believed China had threatened to interfere with the work of US journalists in Hong Kong and warned Beijing that any decision impinging on Hong Kong's autonomy could affect the US assessment of the city's status.

Those foreign news outlets, including US ones, receive work visa from the Hong Kong Special Administrative Region government. They are under the oversight of the Hong Kong. The central government does not intervene with media matters either.

But when the words and deeds of foreign reporters and their reporting touch relations between countries, it becomes a diplomatic issue. Under such circumstances, China's Foreign Ministry will step in—as only a clear stance from the central government can have an effective impact.

In March, China revoked the accreditations of American correspondents with three major US news outlets as countermeasures after the US slashed the number of journalists at four major Chinese state-owned media outlets in the US. These American journalists will not be allowed to continue working as journalists in China, including the Hong Kong and Macao Special Administrative Regions.

Chinese Foreign Ministry Spokesperson Geng Shuang said, "In taking these countermeasures against the US, the Central Government is exercising its diplomatic authority in accordance with the 'one country, two systems' principle and the Basic Law."

As tensions between the US and China deepen and Hong Kong SAR is at the forefront of the bilateral conflicts, the central government is expected to make responses based on China's diplomatic principles and international current affairs. It sanctioned a number of foreign non-government organizations last year, including the US National Endowment for Democracy, the US National Democratic Institute, and Human Rights Watch, which are believed to have played a spiteful role in Hong Kong's months-long violent protests. Under the banner of democracy, these organizations destabilized and ruined Hong Kong.

In Western media reports on Hong Kong's protests, especially from the US, we can see that the Americans have their own set of ideological logic that they advocate worldwide. Under their rhetoric, China has no democracy and Hong Kong people take to the street because they do not have universal suffrage. But the Americans never reflect on their own democratic flaws. The reports of Western media on Hong Kong did not reveal the complexity of the city's problems. There was barely any mention of the interference of external forces and they made it sound as if universal suffrage is a once-and-for-all remedy. The ulterior motive of reporting like this is actually to instigate violence in Hong Kong and drive a wedge between Hong Kong and the mainland.

Meanwhile, journalistic objectivity counted for nothing in Western media's coverage of Hong Kong. When extreme radicals in Hong Kong resorted to violence to meet their political ends, Western media just turned a blind eye. A CNN reporter has unreasonably described demonstrations as "peaceful" while protesters were throwing projectiles at police. As Western media still hold powers of discourse with their twisted logic, many Hong Kong youth have been misguided.

The statement of Pompeo this time is another accusation against China out of thin air. The pompous politician is further exposed that he would recklessly attack China for securing US' geopolitical interests.