In a speech Tuesday at the Ronald Reagan Institute's Center for Freedom and Democracy, US Secretary of State Mike Pompeo said the Trump administration is "not finished yet" when it comes to getting tough on China. He used his most vicious rhetoric to date, accusing the Communist Party of China as a "Marxist-Leninist Monster" whose political system is "authoritarian, brutish." It seems this ideological maniac who is going to lose his job as secretary of state will use his last-ditch effort to discredit China and shape anti-China agenda as the most prominent mark of his tenure. 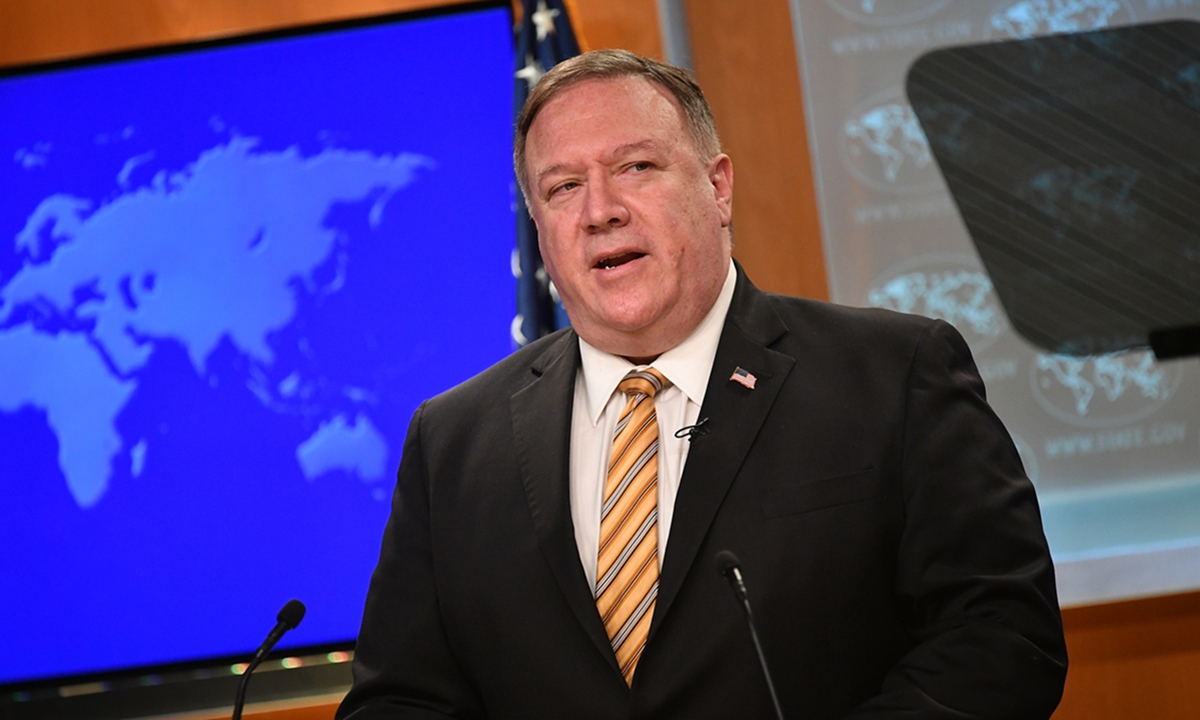 Pompeo admitted in his Tuesday speech that his attitude toward China was formed when he was the director of the Central Intelligence Agency (CIA). This is consistent with people's judgment that he still behaves like a CIA director. In most countries, intelligence organs converge upon bottom-line thinking. By contrast, diplomatic departments represent more of a country's openness and inclusiveness. Pompeo has upended that balance by turning the State Department into a more combative and confrontational front foe - even more so than the CIA.

Pompeo has offended and humiliated diplomats with his bad example. He can be called the "No.1 Wolf Warrior" in global diplomacy. When he is forced to retreat from his position, the louder and more rampant his screams are, and the more they sound like wailing.

Pompeo is obsessed with making China an enemy. He has added a lot of his own fantasies in the China-US confrontation he created. According to his description of China, the two countries should have cut off any exchanges, and even the militaries of both countries should have prepared for a war. But the structure of China-US relations is complicated. While keeping vigilant against each other, the two countries have maintained the largest bilateral trade of the world. Many entangled interests cannot be cut off.

Pompeo will ultimately be a loser. He is that kind of US governing elite who has the most hatred against China, which determines his false depiction of China and extreme policies that could not be widely followed and pushed by others. Much of his anti-China swagger is a bravado balloon and when he leaves, the balloon is bound to burst, as the unrealistic things he promoted will be revealed.

Pompeo's claim that China's political system must end sounds like a political will. However, we want to tell him that socialist China puts the interests of the people at the center, so it will last as long as the people desire a better life. China has outlived many of its political opponents who have fled to the US, and Pompeo would have the same ending if he lives for this goal.

We would like to remind the US white right-wing elites that it is their own country that is most likely to "change color." White supremacy is coming to an end, and the connotation and direction of "democracy" are bound to change. But this will have nothing to do with China. Rather, demographic changes in the US will continue to evolve, leading to an upending of the existing value system and interests in the US.

If Pompeo lives longer than average life expectancy, he will see the critical point in the next two decades when the US will no longer be predominantly white, and all kinds of restructuring that this change will bring. That is the real political challenge in the US. He should just mind the US' own business and deal with the political balance in the great change of the country. Confronting China will not help the US in transition.