A new United Nations report says India's population is expected to increase by about 273 million between 2019 and 2050, and India is likely to surpass China as the most populous country in the world by 2027. 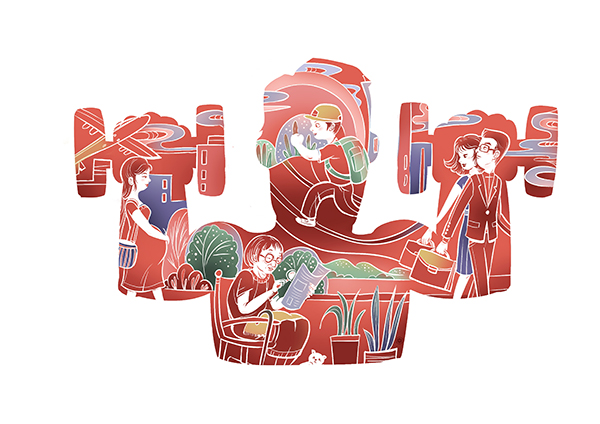 The loss of the title of the most populous country, however, will not be big for China. On the contrary, it should prompt China to accelerate the transformation of its economy from quantitative growth to qualitative development.

The People's Republic of China has made remarkable achievements in human development in the 70 years since its founding, which in turn has facilitated its social and economic development.

A fine example of human development

Among developing countries, China has taken the lead in demographic turnaround. It took just 46 years－from 1949 to 1995－to lift its people's average life expectancy from 40 years to 70.8 years, an accomplishment all the more admirable because China is still a developing economy. As such, China has set a fine example for human development.

As a leading developing country, China has notably closed the gap with developed countries in terms of people's life expectancy and health. In fact, by 2015, Chinese people's average life expectancy at birth had increased to 76.34 years.

Compared with the mortality rate, however, the changes in China's fertility rate have been astoundingly rapid. China became a low fertility country toward the end of last century with its total fertility rate dropping below the replacement the level in 1992 from 5.81, about 2.8 times of replacement level, in 1970. China has had a fertility rate of about 1.6, equivalent to developed countries' average, for quite a while.

The fast decline in the mortality as well as fertility rates has changed China's population growth trajectory. As a result, China's natural population growth rate dropped below 1 percent in 1998, declining further to 0.381 percent in 2018 from a high of 2 percent in the 1950s and 1960s. China's demographic turnaround has also had a major impact on world population growth. In the early 1950s, one out of every five persons in the world was a Chinese as was one out of every four newborns. But the ratio of China's population to the world total had dropped to 18.9 percent by 2015 while that of newborns to 8.2 percent.

Besides, the quality of China's population, reflected mainly in people's physical constitution and educational qualification, has greatly improved. According to the World Health Organization, Chinese people's average healthy life expectancy at birth was 68.7 years in 2016.

The education level of the Chinese people has also significantly improved. China has transformed from a mostly illiterate country before 1949 into one whose working-age population on average had 10.5 years of schooling in 2015. By 2017, out of every 100,000 people, 2,576 were seeking higher education－39 and 117 times of that in 1977 and 1949. And last year, 7.53 million students graduated from college, 38 and 358 times of that in 1977 and 1949. From 1980 to 2018, China produced more than 100 million college graduates and 7.12 million master's degree holders. These developments have helped China to metamorphose from a traditionally human resources-rich country into a human capital power.

Urbanization has changed structure of population

With the deepening of reform and rapid economic development, China's urbanization process gathered pace; as a result, about 60 percent of the country's population lives in urban areas today. Interestingly, China's urban population crossed 46.3 percent, the average level of that in middle-income countries, in 2006 and 50 percent in 2011, eventually surpassing the world average of 53.5 in 2014 and reaching 59.58 percent in 2018.

China's urbanization is as much a result of socioeconomic development as it is a byproduct of the high population mobility in the development of market economy. For the past few years, China's migrant population has hovered around 240 million. The figure increased from 6.7 million in 1982 to 102 million in 2000, reaching 253 million in 2014, among which more than 80 percent of migration was from rural to urban areas.

Human development has made remarkable contributions to China's socioeconomic development: the low dependency ratio brought about by the rapid demographic turnaround almost in tandem with reform and opening-up has won China many demographic dividends, while the fast decline of the population growth rate has greatly reduced the population pressure China felt at the beginning of its economic takeoff.

Facing new problems and tasks, China has entered a new historical phase in terms of human development. The low fertility rate and mortality rate have caused the turnaround in the working-age population and dependency ratio, and led to the rapid increase in aging population, and will soon result in negative population growth. Increasing the fertility rate to the replacement level is a prerequisite for healthy and balanced human development in the long run, as well as a key way to offset the negative effects of the rapidly aging population on the economy.

To build such a society, however, the authorities need to take measures to promote creativity and inclusiveness. In an aging society, education, and science and technology should promote economic development and help generate and accumulate national wealth. While the mechanism and arrangements for improving people's well-being including income distribution, employment, education, and social insurance and welfare should be reformed to promote social equality and intergenerational solidarity, an active, healthy and supportive environment and social service system should also be built to improve the livelihoods of individuals and households so they can provide better care for senior citizens.

As a saying goes, preparedness ensures success, unpreparedness spells failure. It takes long-term planning and in-depth understanding of socioeconomic factors to devise the right population development strategy and realize the balanced development of the economy and the population.