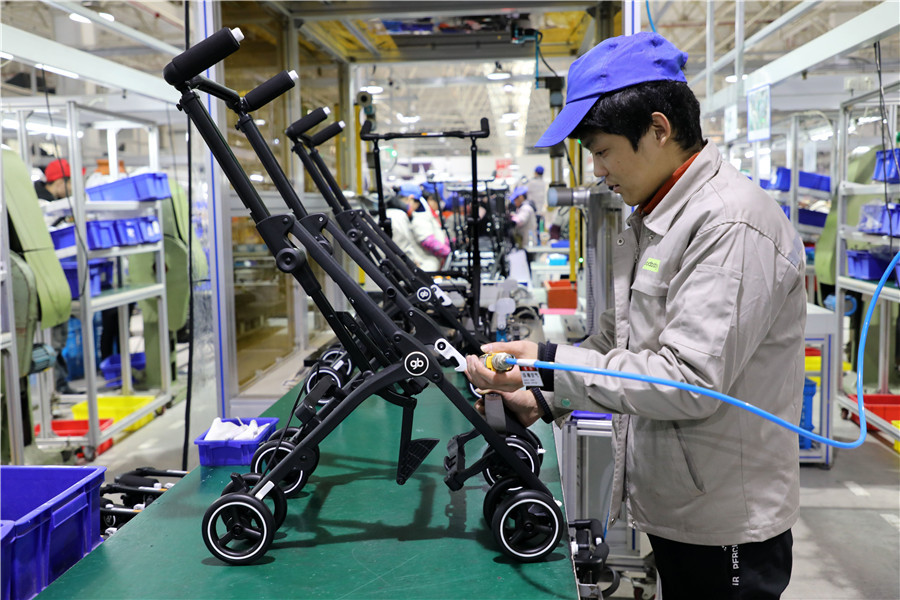 An employee assembles a stroller in a factory of baby product company in Kunshan, Jiangsu province. (Photo: Xinhua)

The main economic indicators of China, including industry, service sector, consumption and investment, all rebounded by a large margin year-on-year in January and February, according to data the National Bureau of Statistics released on Monday.

Even when the low bases of the same months last year are taken into consideration, it is clear that the main indicators of the economy have still maintained steady growth from the pre-pandemic level. That means after more than a year of painstaking efforts to balance the epidemic prevention and control work with the reviving of the economy, China is regaining its development momentum.

Encouragingly, total retail sales of consumer goods, one of the few indicators that did not pick up till the end of last year, rose 33.8 percent in the first two months of this year compared with the same period last year, and was up 6.4 percent in the first two months of the year before. That makes its average annual growth over the past two years 3.2 percent.

The added value of industrial enterprises above designated size — those with an annual business turnover of at least 20 million yuan ($3.08 million) — increased 35.1 percent year-on-year in the first two months of this year, up 16.9 percent compared with the same period of 2019. That means average annual growth over the past two years was 8.1 percent, relatively high compared to what it has been in recent years, showing the backbone of the real economy is being strengthened.

In particular, the output of high-tech industries and the equipment manufacturing industry, two key sectors policymakers have pinned great hopes on to lead the country's innovation-driven growth and industrial upgrading, both outperformed that of the industrial sector as a whole.

Although the employment situation remains challenging, the urban unemployment rate in the first two months dropped 0.7 percentage points compared with the same period last year, with 1.48 million jobs created. And the service sector, which grew 6.8 percent annually on average over the past two years, is the largest contributor to the growth in employment.

Over the first two months, the Association of Southeast Asian Nations, the European Union, the United States and Japan — China's four largest trade partners — all saw their trade with China grow quickly, and China's foreign trade hit 5.44 trillion yuan ($836.7 billion), up 32.2 percent year-on-year, among which exports increased 50.1 percent to 3.06 trillion yuan, with the US becoming the top destination for China's exports.

These hard-won achievements can be attributed to the effectiveness of the government's epidemic prevention and control efforts and its pro-employment, pro-innovation and pro-business policies.

That being said, the world's second-largest economy looks set to sustain its recovery momentum and so continue to act as a restorative tonic for the ailing global economy.