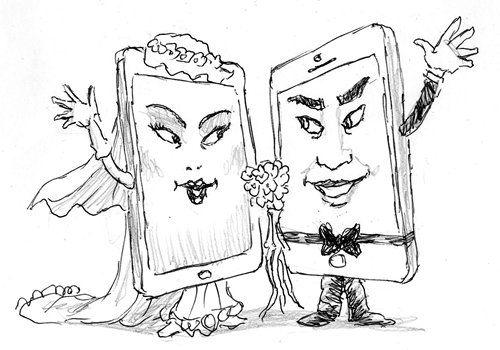 China's post-90s generation, 18-to-28-year olds born after 1990, is often considered lazy or fickle. It has a reputation for wanting to "celebrate the moment" and "living in the present," which contrasts with their post-80s cohorts. They are even more digitally obsessed. As some observers have noted, their dependence on technology is probably just "a leading indicator of where life is headed for everyone." This proved to be true at a recent blind date event in Beijing.

The blind date is a Chinese tradition steeped in over a century of history. It still affects the lives of single people in China, especially in big cities where the young struggle for a living without much time to find a partner. Many post-90s of marriageable age constitute a majority in the country's blind date market.

The way the post-90s choose their spouses may put you in awe. Unlike the post-80s who prefer good appearance and presentability and go to a blind date to find whether the other side owns a car, a house and a good job, the post-90s see common interests as a determining factor.

How to know a person's interests? The shopping cart list speaks. That's how a number of young people succeeded in match-making at a recent blind date event. A long list from a person's e-shopping app was enough to show his or her likes and character.

Perhaps she loves cooking so may add kitchenware to her shopping cart list. She may be a material girl who buys luxury handbags and cosmetics. He may be a tech nerd whose shopping list is full of electronic gadgets. Which shopping shelf you go to reflects yourself, shall we say. You can always find the type of person who caters to your taste.

This may sound odd, but if you read into the minds of the post-90s generation, you wouldn't be that surprised. An article last year reported about some post-90s kids who want to "become Buddhists" with their Zen-like mentality to work and life. As the article says, this generation "never competes for anything and doesn't care about results."

Perhaps this unconstrained style makes these young people feel that a shopping cart list can help them find love. At least, they put common interests and hobbies above houses and family backgrounds when they think of a relationship.

Things only turn worse when the diverse characters of these young people are ignored. At the blind date corner in parks where worried parents place an A4 paper with the age, job and assets of their children on it and try to help them find a suitable spouse, the scene resembles a market. The post-80s generation is familiar with such a sight. But the post-90s refuse to be "traded" in this fashion.

The post-90s generation will continue to amaze their seniors, with their unconventional attitude toward work and life, not only in the blind date market, but also on various occasions. Hopefully, they can establish their identity in society and shoulder responsibilities to become the backbone of the country.