OPINIONS Post-pandemic international relations could change for the better

Post-pandemic international relations could change for the better 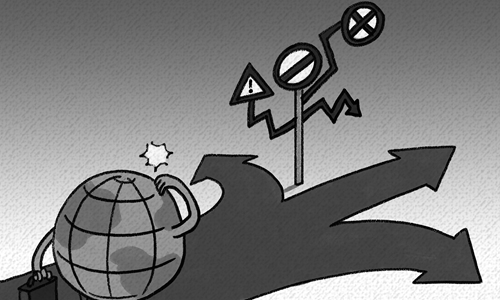 The COVID-19 pandemic has so far swept the world and many countries have declared a state of emergency. The pandemic has had a tremendous influence on the entire world and people are already considering the impact it will have on international relations.

Indications are the pandemic is very likely to trigger a global economic crisis. If so, globalization and international relations will see fundamental changes.

Economic globalization is characterized by the smooth flow of personnel, capital, trade and information, but global health and the environment have not received sufficient attention. As a result, globalization is handicapped by the COVID-19 outbreak. With its fatal flaw coming to light, globalization must undergo profound adjustments. Otherwise, some countries will embark on a populist journey, which would create even more volatility in the world's economy. Globalization will need to incorporate new elements like human health, nature and the environment. High-quality enterprises will be attracted to countries with effective public health mechanisms and good environmental standards. These countries will then take the lead in globalization's new processes, and their ideas and development model will be respected by other countries and regions.

The COVID-19 will help redefine legitimacy in international relations. The prevention of the pandemic once triggered an argument over democracy and sovereignty. In face of the rapid spread of the novel coronavirus, people will have to learn to play down ideology and sovereignty. Hopefully this will become a universal principle in the field of public health security.

If a country succeeds in both overcoming the virus and making a contribution to easing the world's situation, its prestige is sure to be enhanced and its diplomatic concepts will prevail.

The pandemic's huge threat to the world calls for improvement in international public health. The global governance system must include public health as a key component.

In terms of authority, resources and capacity, there are serious deficiencies in international coordination of public health security. It is imperative that greater empowerment is given to the WHO, new mechanisms centering on the United Nations are jointly built and all countries coordinate. Multilateral mechanisms such as the G20, the Shanghai Cooperation Organization, ASEAN and APEC also need to add public health security as a key priority. The improvement of regional or global public health governance mechanisms are the scale by which effective international relations will be measured.

Setbacks emerging in the fight against the virus remind people that international stability is under threat. Some self-centered countries still blindly pursue national priorities, unilateralism and hegemony. This may not only worsen the situation in their own nations but international concerted efforts to curb the pandemic will also be impacted.

The inherent detriments of hegemony and unilateralism are exposed amid the global war against the COVID-19. The strict adherence to alliances as a dominate force in the international order is losing appeal. In the face of severe situations, the world will eventually turn to coordination and cooperation.

The pandemic will change the industrial and supply chains of international trade. China has made great achievements in fighting the virus, which will increase the world's confidence in the country and reinforce its role as a stabilizing influence on the global economy. China's vision of building a community with shared future for mankind is being better understood through the mutual help between China and countries like Japan, South Korea and Italy.

The pandemic has also had a profound impact on China-US relations. Americans and state governments are willing to communicate closely with China, while the federal government pins the blame on China. Most Americans can see that Washington is merely attempting to deflect domestic criticism by unfairly tarnishing the image of America's main geostrategic rival. Such practices have created serious obstacles to China-US cooperation in the ongoing fight against the virus.

China-US relations will be determined to a large extent by whether the Americans and local governments can restrain the federal government's paranoid policy toward China. It's a pity that the US government is using the global crisis to create new conflicts while forgoing the opportunities presented for increased cooperation.